Academics at the College have developed a large number of partnerships with universities, research institutes and industry in the MENA region.

Over 300 students from the Middle East are currently studying at the College.  The countries with greatest student numbers include Egypt, Iran, Lebanon and Saudi Arabia.  These four countries are also the ones that the College has produced the most joint papers with over the last five year period.

One of College’s most successful collabrations in the region has been the Qatar Carbonates and Carbon Storage Research Centre.  The Centre is a partnership with Qatar Petroleum and Shell, with additional support from QSTP.  It aims to strengthen Qatar's engineering expertise and expand research capacity in carbon capture and storage (CCS) and cleaner fossil fuels. The Centre involves over 40 academic staff, postdoctoral researchers and PhD students.

The College has worked with King Abdullah University of Science and Technology (KAUST) since its inception. In the early stages the College supported KAUST in developing its academic staff and curriculum.  The partnership has now evolved so that Imperial and KAUST faculty are carrying out collaborative research in a number of fields, such as dust aerosol over the Arabian Peninsula with the Department of Physics.

In January 2015 the College partnered with KAUST to host the 8th Saudi Student Conference in the UK, which over 1200 Saudi postgraduate students attended.

In Egypt, academics from the Department of Surgery and Cancer are working with the National Liver Institute at Menoufia University on research into viral hepatitis.  In 2016 the teams were jointly awarded Newton Funding to host a workshop on chronic viral hepatitis in Africa.

In April 2016 the College’s Centre for Transport Studies signed an agreement to strengthen its engagement with Dubai’s Roads and Transport Authority.

There are a number of active Imperial College alumni groups across the region including in Bahrain, Kuwait, Lebanon, Saudi Arabia and the UAE.

News from the Middle East

Majority of COVID-19 deaths in Damascus, Syria are unreported 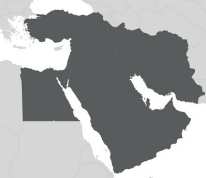 Middle East
Are you from the Middle East, and interested in studying at Imperial?
Back to Global Imperial