The major causes of broken rails are transverse cracks (often initiating from gauge corner cracks that start at about 70 degrees to the vertical but then 'turn down') and defects at alumino-thermic welds. These defects are difficult to detect reliably using conventional MHz frequency ultrasound propagating typically at angles between the normal to the rail surface and 70 degrees to the vertical. These angles are not well suited to the detection of vertical cracks. There are also problems associated with the geometry of the rail head, severe cracks may be masked by adjacent shallower cracks and it is difficult to penetrate the alumino-thermic weld material. This project is investigating the feasibility of using either low (tens of kHz) or higher frequency guided waves propagating axially along the rail to improve the detection reliability. 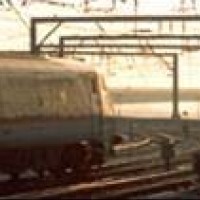