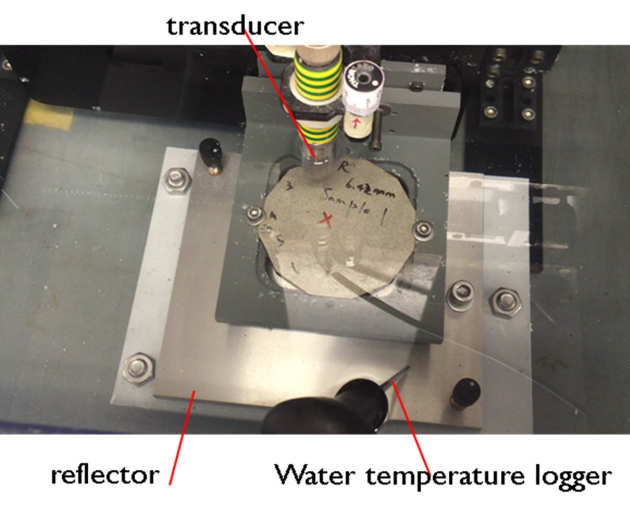 Hexagonal close-packed (e.g. Ti and Zr) materials are highly anisotropic in single crystals, so the crystallographic orientation distributions (texture) in polycrystal aggregates dictates many of their macroscopic properties. Detection methods like X-ray diffraction and EBSD are not able to achieve lab-based or industry-level bulk texture characterisation, whereas ultrasound offers such potential.

We have established, and provided proof-of-concept of, a complete theoretical framework which reveals the polycrystal wave velocity variation in the 3d space as a spherical convolution of the single crystal wave speeds and texture. It thus enables inverse extraction of texture info from polycrystal ultrasound measurements, and an experimental rig has been assembled for this purpose. The top figure shows the setup consisting of a transducer generating and receiving waves, which goes through the polygon-shaped sample and is reflected back by the reflector. By tilting and rotating the sample and measuring the time-of-flight, speed variations are captured and then deconvolved for texture, which is shown in the bottom left figure together with that obtained by neutron diffraction on the right. A good agreement is evidently achieved.