Alumni blog: From Imperial to the Workplace - My Career Journey So Far

In my last article, I gave you an overview of my time at Imperial, why I went to the Business School and how it helped me transition into the workplace. Here I’ll delve deeper into my decision to do more business-focused roles in science industries and how my time at Imperial influenced the choices I’ve made.

Whilst I was at Imperial, I was unsure what I wanted to do after graduating, so I experimented by doing several internships in very different areas. This included the charity sector, a social enterprise and a pharmaceutical company (GSK). I was pretty much taking a shot in the dark with each one to see what stuck! The first two were not science related at all, but gave me some experience in events and marketing. At GSK, I did a HR role, and was happy to work in a science-led organisation.

I also attended A LOT of careers fairs and talks, where I networked with many employers. Mostly, they were banks or consulting firms talking about science graduates going into these fields. But I also discovered some interesting potential paths that I had never heard about before. Some healthcare-based charities came and spoke about roles in Science Policy. A patent attorney gave a talk about intellectual property and patent law being an alternative career path for scientists. The more I spoke to people about these fields and did my own research, the more I discovered other fields like Science Communication, Science Education & Outreach, Life Sciences Consulting, Teaching, Clinical Operations, Regulatory Affairs, Business Operations….the list goes on.

Discovering all my options

Suddenly, there were almost too many choices for me as a Biology graduate! Luckily, I was able to extend my degree for a year to do Management at the Business School. I knew this was the right option because I was sure I wanted a business-focused role. I thought I would be more suited to work where business skills like project management or communication were needed. When I did those internships, I felt more fulfilled than doing research projects at university. A lot of this was because of the real world, practical application I was able to experience in the workplace.

I ended up landing a graduate job on GSK’s HR Future Leaders Programme. In the Pharmaceutical sector, I got exposure to an almost overwhelming number of roles you can do in the science industry. Working in HR in the Pharma industry was great because I built a foundation of business skills that I can now transfer to a wide range of roles across industries. It is also where my interest in supporting others with their development was ignited. I rotated around four different areas of the company before being promoted to a HR Manager role, so in total I did five roles there. Mostly, I ended up working with Research & Development departments, which meant I could work closely with scientists and others in science-related roles. It gave me a sense of fulfilment to keep a link to my science background and support the work of scientists, without having to directly do the research myself!

Luckily, I was able to extend my degree for a year to do Management at the Business School. I knew this was the right option because I was sure I wanted a business-focused role. I thought I would be more suited to work where business skills like project management or communication were needed.

Where I am now

I decided to leave GSK and explore different science-led industries through volunteering and networking. During this time I also started Outside the Lab to support others with their career development in non-academic roles. I volunteered at the Cultural Events team at the Science Museum Group and now work in Research Grants & Funding, supporting researchers to apply for funding for health-care related studies.

All the way, I’ve been able to keep my link to science and apply business skills at the same time, which is exactly what my degree in Biology with Management set me up to do. It’s been really fulfilling to know that both parts of my degree are relevant to my career.

If you interested in taking your career outside the lab and want to know how to start, you can watch Batool’s webinar on How Science Graduates Can Get a High Paying Job Outside the Lab Even if You Have Little to No Work Experience.

Alumni blog: How the Business School set me up for success in the workplace 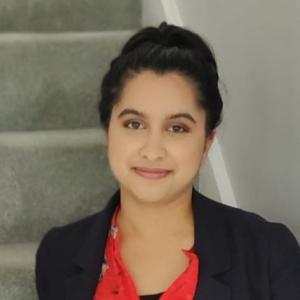