How the internet is changing childbirth

As the internet continues to make healthcare information easily accessible, expectant mothers are changing how they choose to give birth

Becoming a parent for the first time is filled with uncertainties. What do I need to do to prepare my home for a baby? How long should I breastfeed for? How should I give birth?

Naturally, people are turning to the internet for answers. A quick search on any parenting topic reveals a seemingly endless list of resources, ranging from peer-reviewed medical journals to personal anecdotes from bloggers. One might expect the average person to be fully equipped with the knowledge needed to work with healthcare professionals to make the best decisions possible. However, the variety and quality of information available does not appear to be leading to this ideal outcome.

C-sections on the rise

Our research shows that reliable internet access increases the likelihood of parents undergoing an elective Caesarean-section birth. While this has not been associated with any negative health impacts, it does suggest the internet is changing how healthcare decisions are made.

Childbirth has a few distinct characteristics that make it a useful medical procedure to consider alongside internet access. As one of the most common reasons for hospital admission in the world, it is a reliable source of data, on top which, patients, at least in the majority of cases, have months to research and plan their hospital visit before they give birth. And since childbirth is such a common experience, there is no shortage of information available online.

Mothers with better and faster access to the internet were 2.5 per cent more likely to have an elective C-section

The UK’s National Health Service (NHS) also helps mitigate some of the potential explanations for increasing rates of C-section deliveries that exist in other countries. The majority of parents in the UK give birth in their local hospital free of charge, so they don’t often "shop around" or travel for specific treatments. The NHS also funds hospitals based on the needs of the communities they serve, removing incentives for physicians to perform comparatively more expensive or unnecessary procedures. If anything, an incentive exists to perform fewer elective C-section births due to budgetary constraints.

To measure the impact of internet access, we examined a crucial period of time in the UK. Between 2000 and 2011, the quality, reliability and speed of the internet was highly dependent on the household’s distance from its local exchange, leading to significant disparities in access. The UK was also fairly slow to roll out high-speed broadband compared to the rest of the world, leading to even greater disparities. By matching a detailed map of internet coverage to census and hospital discharge data, it is possible to estimate the effect of better and worse internet access on the type of delivery mothers had.

Relying on the internet for answers

Between 2000 and 2011, the rate of C-section births in the UK rose from 20.7 per cent to 24.3 per cent. While C-section rates have increased overall, the reasons the procedure was performed are more important.

Hospitals undertake two types of C-sections: emergency and elective. While emergency procedures are unplanned, elective C-sections are decided on well in advance of the actual birth. Between 2000 and 2011, emergency C-sections increased by 14 per cent, while elective procedures increased by 20 per cent. Based on this, the overall increase in C-section procedures is being driven by parents choosing to give birth this way, as opposed to out of a medical necessity.

When comparing internet access over the same period, statistical analysis shows mothers with better and faster access to the internet were 2.5 per cent more likely to have an elective C-section than those living in areas with worse internet access. In comparison, emergency C-sections, which are performed only when medically necessary, were unaffected by internet access.

The internet can be associated with positive health outcomes, but it has also fuelled misinformed and dangerous groups

One particular demographic group stands out. First-time and low-income mothers were six per cent more likely to undergo an elective C-section, making them largely responsible for the overall increase in elective procedures. One would expect first time mothers to be particularly interested in, and subsequently influenced by, information on childbirth. Those who lived in more deprived areas were most affected by this. As rates of elective C-section had been higher for higher income mothers, internet access progressively closed the gap in C-section rates between low-income and high-income mothers.

While the increased rate of C-sections has not been associated with any negative health impacts for parents or children, it does raise some concerns. In some cases, the internet can be associated with positive health outcomes, but it has also fuelled misinformed and dangerous groups such as "anti-vaxxers". Ultimately, its reliability as a source for accurate and useful information dramatically varies from site to site.

Another factor is the cost, particularly in a system like the NHS where treatment is paid for by the general public. Better decisions have the potential to lead to effective use of limited funding. If the internet is changing the way healthcare decisions are being made by users of health services, medical professionals may have to adjust how they approach and discuss medical decisions with patients in order to arrive at the best possible outcome. 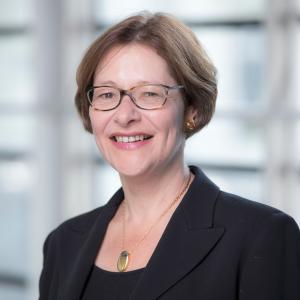 Chair in Economics
Professor Dame Carol Propper is Chair in Economics and a member of the Centre for Health Economics & Policy Innovation. In 2010, she was awarded a CBE for her services to social science. She was elected as a Fellow of the British Academy in 2014, and made an International Fellow of the US National Academy of Medicine in 2018. In 2019, she was elected President of the Royal Economic Society. She was made a dame in the 2021 New Year's Honours for her contribution to economics and public health.

MSc International Health Management is a one year, full-time programme that provides the essential skills needed to springboard you into a management career in the global health sector.