The concept of global health is one that shines through when you speak to Aula. She doesn’t believe that healthcare should be limited by borders and feels that global health is becoming an increasingly important topic.

“Global health is what’s happening on our doorstep, especially here in London. It’s not something you have to go abroad to experience. All of us who are working in the health profession should have the skills to deal with relevant issues, for example cross-cultural communication or understanding the health systems from which our patients come from” she says.

It’s an area she is involved with in every aspect of her current work, from treating people with infectious diseases as a consultant, to teaching medical students in the UK and healthcare professionals overseas about global health issues.

Co-founding Health Professionals for Global Health is another way in which she’s promoting this aspect of healthcare. This organisation encourages UK-based health professionals with an interest in this area to come together to support global health advocacy and educational events.

Forging a future at Imperial

Aula grew up in London and explains she wanted to study at Imperial because of its excellent reputation as a medical school, as well as the quality of the training in West London. As well as completing her undergraduate degree in Medicine here, she also completed an MD(Res) at the university, during which she undertook clinical-epidemiological research on TB in the north-west London population while based at Northwick Park Hospital’s infectious diseases department.

The threat caused by antimicrobial resistance is among the biggest future challenges we face; add to that the particular consequences which conflict or humanitarian disasters create and this can be catastrophic to patients and health providers."

Aula enjoys working across a range of infections and with a wide variety of patients, including those who may be socially vulnerable. “It’s a speciality which builds on a long history, however it’s also a field that’s rapidly changing in terms of emerging and re-emerging infections, novel antimicrobials and novel diagnostics alongside some often challenging social circumstances,” she says.

The opportunities to travel are another reason she found herself drawn to this field. She did her elective while at Imperial on the Thai-Burmese border with the Shoklo Malaria Research Unit, working with Karen refugees. This experience developed her interest in humanitarian work, which is now a large part of her life. Between 2016 and 2018, she led a project for the Syrian American Medical Society Hellas during which they provided over 30,000 primary healthcare consultations for refugees in Greece.

She describes her current role as her “perfect job”, but acknowledges that she hasn’t taken a conventional career path since completing her undergraduate degree. Aula’s association with Imperial didn’t end when she graduated. She works for the Imperial College Healthcare NHS Trust as a consultant in infectious diseases and acute medicine, and teaches on the BSc Global Health at the university. She supervises students for their dissertations and was involved in the co-design of a new module (Data Management Interpretation and Communication) for the 2019 cohort which utilised real-word surveillance data from conflict zones alongside a humanitarian simulation.

“I’d describe my journey as long and winding,” Aula says with a laugh. “It’s been full of surprises. My current post gives me an excellent balance across infection and acute medicine at the St Mary’s and Hammersmith sites and allows me to work within an excellent department while also allowing me to maintain my other interests.”

Teaching and mentoring medical students at the university as an important part of Aula’s work and something that she feels she’s good at. Her students clearly agree, having nominated her for the Teaching Excellence Award for NHS Teachers at Imperial College.

When asked why she feels teaching is a good fit for her, Aula replies: “I expect because I’m able to convey my enthusiasm and present concepts simply giving students a foundation on which to build.” 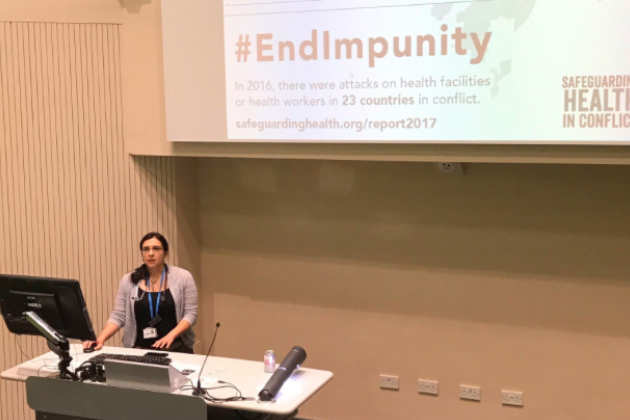 Her experience of working overseas in conflict and catastrophe areas feeds into her teaching and allows her to provide a unique perspective for her students, particularly in the field of global health.

Aula believes it’s important for students to hear from people who have been to these places and seen the challenges first-hand.

“I’m increasingly asked to speak about refugee health, humanitarian health and antimicrobial resistance in conflict across the UK and abroad. I always reflect on my experiences and aim to give a real-world perspective; this is important as it gives grounding to the subject. For example, being in the field has allowed me to explain some of the complexities of investigating and managing Ebola versus delivering a more theoretical or academic lecture having volunteered with Medicins du Monde in Sierra Leone in 2015,” she says.

I have benefited so greatly from my time at Imperial that it is important to give back. Among the students who I teach or supervise, I’ve found that having one-to-one guidance and attention can be really helpful and make the students feel more valued as individuals and ultimately increases their motivation."

Another reason that she is increasingly involved with education, as well as working as an NHS clinician, is to provide support to medical students at various stages of their studies at Imperial, especially given that a single year can include more than 300 medical students.

“With such a large year group and in such a competitive environment, I know that students can sometimes feel like they’re on a conveyor belt and that no-one senior may be taking an interest in their particular aspirations. I think it’s important to remind them that this isn’t the case and that when they graduate, they really should think about what fulfils them and what direction they would like to take,” she states.

Aula is keen to share her journey with her students. “I’ve been very lucky, because though there are times when I have missed out on what I thought were the right opportunities for me, something better has always come along; this has made me realise that it’s important not to get discouraged and to remember that things really do happen as they are meant to,” she says.

Medical students at Imperial aren’t the only ones who benefit from Aula’s experience and support. While she’s very clear that her NHS work comes first, she spends much of her annual leave travelling to conflict areas to develop and deliver training for healthcare professionals.

“In 2012, while I was in the third year of my infectious diseases and general medical training, I began using my annual leave to volunteer with Syrian non-governmental organisations in Turkey to support clinical care, training and teaching,” she explains.

Although Aula had worked in refugee camps before providing support to those displaced by the Syrian war, she reveals that this conflict has a particularly personal tie.

“I was born in London, but my family is Syrian,” she tells us. “They, like all Syrian families, have been very affected by the protracted and violent conflict that began with a peaceful uprising in 2011.”

“Because of my family, I had good contacts and I was also a relatively senior infection and general medical trainee by the time I started supporting initiatives for Syrian refugees. I was able to be useful in terms of clinical work, teaching, training and developing protocols for different projects in both infection and other specialities,” she adds.

One of the things that she feels is so important about her involvement is the consistency with which she’s been able to visit the refugee hosting countries and provide help. The more time she spent carrying out this humanitarian work, the more she started to recognise the challenges the conflict posed for Syrian health professionals.

“I’m on the steering committee of the Syria Public Health Network and we were one of the first groups to fully engage with the effect of the conflict on Syrian health professionals in Syria and who are refugees. We began to think of what policies or actions could support health professionals affected by the conflict. Syrian health professionals not only experience the trauma of working in health facilities which are attacked or under-resourced but their own training and career is stalled. There are few opportunities to specialise for instance or have their training officially recognised. Many have continued to work inside Syria under extremely challenging circumstance while others are refugees in the middle east or Europe and face a different set of challenges,” she explains. 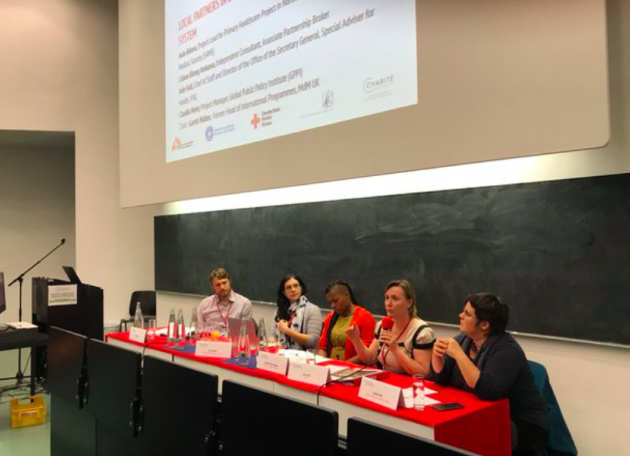 “My aim for the next year is to work with Arabic speaking colleagues to develop high quality, Arabic language lectures on infectious diseases topics which are relevant to the local context and, if possible, hope they can be used not only in Syria but in other countries too,” she says. “I would also aim for them to be them to be recorded so they can act as a future resource.” But she recognises that teaching these courses in person limits how many people she’s able to help.

Aula has also worked with Syrian researchers to conduct research which explores the experiences of Syrian refugee health professionals in Syria, Egypt and Lebanon; they are about to start similar work in Germany with Charite University. “For me, this is important because it’s research which captures the current experiences of health professionals who have been affected by protracted conflict, the challenges they face and how their practice has changed but it is also important for advocacy or to push for changes in policies which adversely affect refugee health professionals,” she explains.

Aula would like other healthcare professionals to think about how they can contribute in humanitarian contexts in which every way they can.

“It’s interesting and challenging and certainly broadens your perspective; for example, I have developed a far better understanding of how health systems function and how they are affected by crisis than I would have if I had only worked in the NHS,” she states.

One thing I would say is that it’s important to go with a humble attitude. I’m always very clear about the fact that I’ve learned a lot more than I could possibly have contributed and that my experience outside the NHS has developed relevant generic skills and of course my resilience."

She is a strong believer in reverse innovation, and explains that some of the things she’s learned from working in conflict areas can be applied here in the UK. “It reinforces the fact that cost effective changes in practice that are sustainable can be implemented and this is something that is increasingly relevant to our resource constrained NHS,” she adds.

When asked what achievements she’s most proud of, Aula says it’s the encouragement and opportunities she’s been able to provide for colleagues and students.

Aula also has some advice for women who are considering a career in medicine. “I would say of course go for it,” she asserts.

“I have had excellent opportunities and support at Imperial as a woman in medicine. I always remind young women to be sure of themselves and not worry quite so much about what they think they should be doing but more what they would like to do or contribute. This is certainly something which took me a long time to realise.”

Dr Aula Abbara graduated from Imperial with an MBBS in Medicine in 2005 and an MD (Res) in Clinical Medicine Research from the National Heart and Lung Institute in 2017. She was a winner of the Emerging Alumni Leaders Awards in 2020.

Dr Aula Abbara is the recipient of our inaugural Emerging Alumni Leaders Award in 2020. This award recognises and celebrates alumni under the age of 40, who are remarkable leaders in their field, have demonstrated outstanding achievements or are making a substantial impact on society.