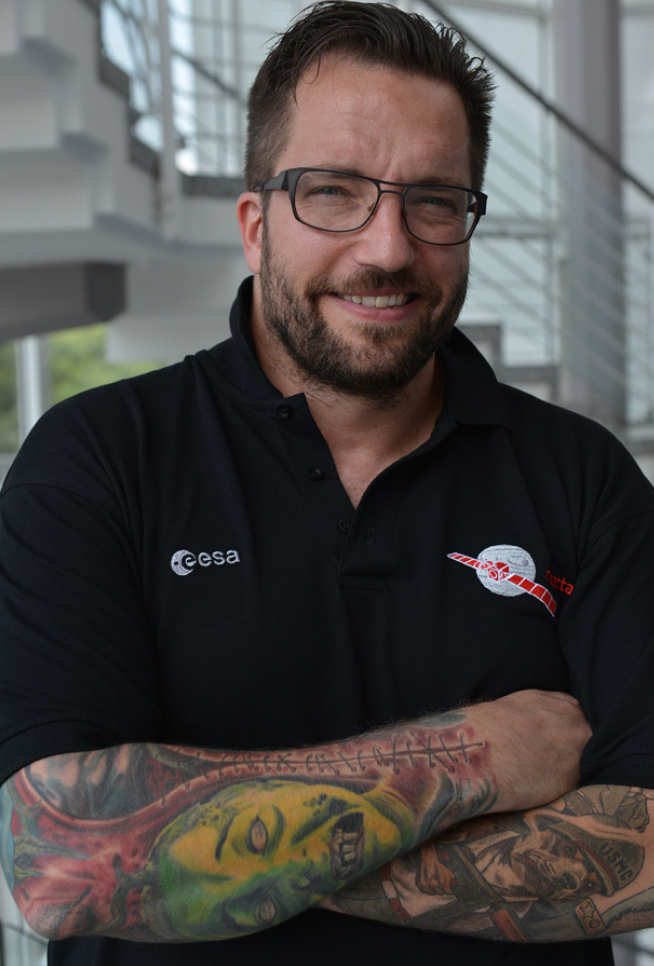 We caught up with Dr Matt Taylor (PhD Space Plasma Physics 2000), the European Space Agency Project Scientist who helped to guide the Rosetta spacecraft to comet 67P. Read our full story about Matt, 'Profile of a comet chaser', on our news website.

What’s the elevator version of your role in the Rosetta project?

"I am the ESA Rosetta Project Scientist. My job is to act as interface between the science community and the mission operations to ensure the science we want to do is done, to the best of the capabilities of all entities involved."

You have a quote from Blade Runner in your email signature. What does that tell us about you?

"It tells you I like Blade Runner, and I think Rutger Hauer was AWESOME in that film. I have this quote in my thesis too. That quote resonates in many ways. I paraphrased it during the landing event, as we really are seeing unbelievable things with Rosetta. But things wont be lost in rain I hope."

What’s it like to be part of such a long-term project? Is it hard to maintain your motivation and excitement over the whole duration of the mission? (eg from hibernation to the intense glare of the media leading up to the landing?)

"To be honest, discussing the high level goals of the mission and doing the media interactions help a lot with the normal 'cheese roll' work and keeps one motivated. The team at Imperial, in particular the wonderful Leah Alconcel, were involved in a Rosetta related exhibition at the Royal Society this last summer and it's AMAZING to be able to light up people's eyes when you tell them what we can do in space and why. It reminds you that actually science is THAT cool.

What’s next for you and for the Rosetta project?  Can you ever top the experience of landing on a comet?

"It has only just begun. The landing marked the real beginning of the science phase. Now we are full throttle in characterising the comet. It is mind blowing that we will be able to track changes in the physical appearance of the comet. Watch it change before our eyes. Next summer the comet reaches perihelion, closest approach to the sun and that's when the comet action will really kick off, 100 kgs of material being spat out per second. Its going to be a bumpy but exhilarating ride."

Thinking about your time at Imperial, what did you learn during your time here, inside the lab and  out? How has your Imperial education helped you in your career so far?

"I did my PhD at Imperial, in Space Plasma Physics, in the Space and Atmospheric Physics group. So my time at Imperial was FUNDAMENTAL in allowing me to start and continue with the career I have now.

I remember at my interview when asked why I wanted to do a PhD, I pointed at the interviewers, Professor Peter Cargill, Professor Michelle Dougherty and Dr. Robert Forsyth and simply said 'I want to do what you do. I want to be a scientist I want to do science!'

Peter ended up being my supervisor (I was his first student, he quickly refined his selection criteria and his subsequent students were excellent). Imperial is a world-renowned university. The SPAT group is a world leader in its field. I was able to interact with many excellent scientists and learn how to DO research. I had begun when I was an undergraduate at Liverpool, but I think at Imperial it was when I really found out how to get on with things, how to interact and to be myself, and find encouragement and support from mentors and peers in the group (this is part and parcel of PhD life).

With that I also started to learn the importance of collaboration. That was key for me in my early career, working on the ESA Cluster mission, which I eventually entered ESA working on, ending up as Project Scientist of that mission for a number of years.

For me the task of Project scientist at ESA is primarily about collaborating (or driving collaboration) and ultimately facilitating science. So I may not have become a scientist at the level of my PhD interviewers, but I have got a position where I help scientists do their science, which is nice.

Imperial also taught me how cool space plasma physics is and that magnetic fields are more than just wiggly lines. Just ask the magnetometer teams in SPAT.

Dr Chris Carr is the Principal Investigator (head of the instrument) of the Plasma Interface Unit on Rosetta, so I am in relative frequent contact with him (which he is VERY happy about).  I also recently crossed paths (and had a celebratory glass or two) with Professor Dougherty following the acceptance of the JUICE mission for implementation. Michelle has been fundamental in getting this mission to where it is today. Nice one. JUICE will explore Jupiter and its icy moons, so of course it's going to be cool."

What is your fondest memory of your time here?

"This is all about colleagues and people. You can become very focused on what you are doing and it's important to snap out of that and take a break. I spent a good many hours chatting with the group secretary, Sue Balogh (who sadly passed away some years ago) over tea, but those chats help you get through the day. For me the fondest memories are the group Christmas parties. One year we did a Family Fortunes quiz (with an authentic display with sound effects), with the families represented by the Atmospheric and Space sides of the group. That was immense fun. I can't remember much more, so it must have been brilliant."

Do you have/have you had a mentor or role model?

"I don't specifically have a single mentor or role model, but a collection based on the people in my life, my wife, my kids, my family, my colleagues past and current. All can give you insight into how to tackle an issue or to suggest an alternative track.

In the early stages of my career, I benefitted greatly from guidance from my PhD supervisor, Peter, and other colleagues at Imperial. This continues today of course, spanning many places that I have worked. Two years ago, a meeting was held at the Royal Astronomical Society by ex and current members of the SPAT group, primary by Professor David Southwood, celebrating his supervisor's 90th birthday – Professor Jim Dungey. It was an honour to present at that meeting and to see Jim and all of his students, who are leaders in the field. They are the rock stars."

"For me, and I say this to my own kids, don't be afraid to ask questions. Don't ask them for the sake of it of course, but if you don't understand, go ask. This doesn't have to be during lectures or class, it can be deferred to a one to one interaction, but basically, don't stew.  Also, listen to the PhD students helping you in first year tutorial classes."

Do you have a favourite quote or saying you could share with us?

“'Follow your dreams, you can reach your goals, I'm living proof… beefcake' E. Cartman, South Park. That's in my PhD thesis too."

"Don't be afraid to ask questions. Don't ask them for the sake of it of course, but if you don't understand, go ask. This doesn't have to be during lectures or class, it can be deferred to a one to one interaction, but basically, don't stew."

Read our full story about Matt