The activity presented here should provide you with an understanding of the process of osmosis, give you a visual representation of how it works in a fun series of experiments that can easily be carried out at home!

By carrying out this activity you will not only understand the theory behind osmosis, but start to think like a scientist about how experiments are designed and how we interpret our results.

When a membrane is semi-permeable or partially permeable it means water and certain substances in solution can pass through it but many other molecules cannot. An example is the cell membrane that makes up the outside of animal cells. 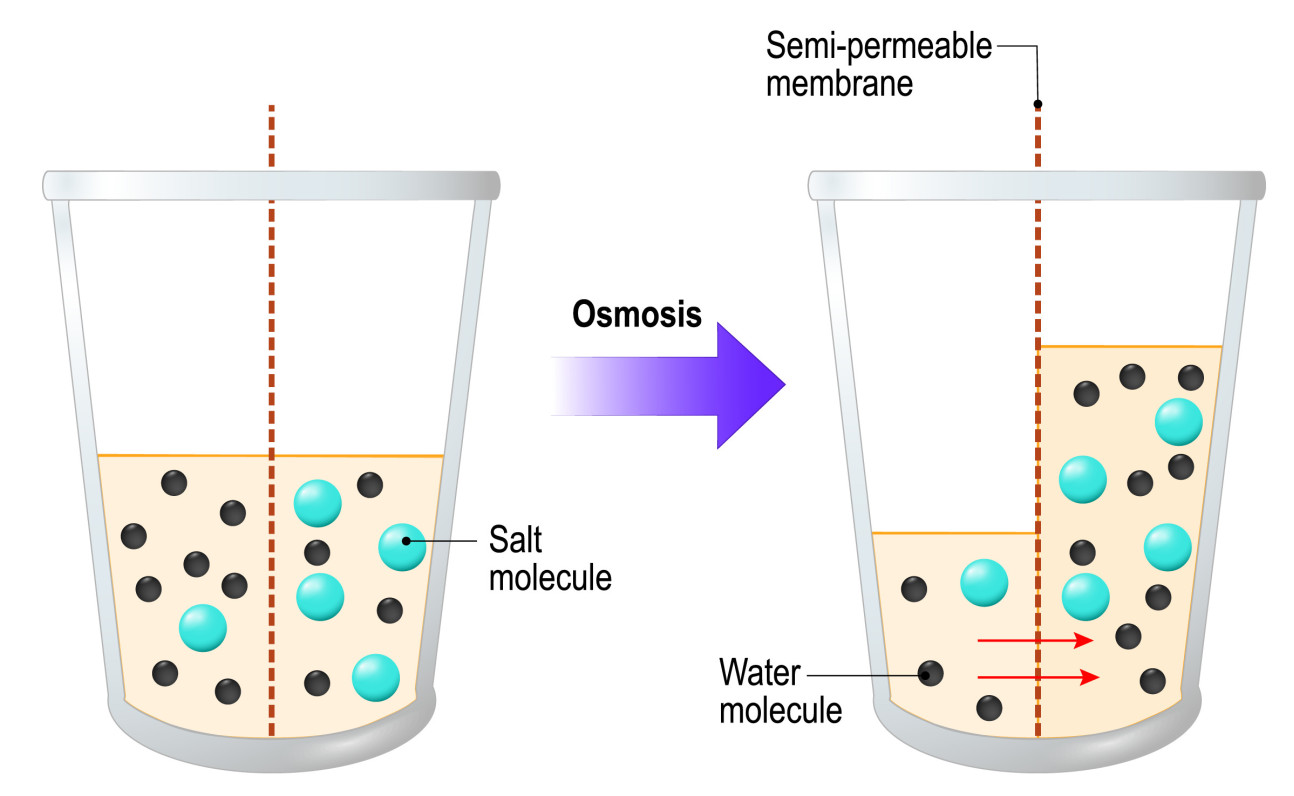 In this experiment, we will use an egg to demonstrate how water diffuses through a semi permeable membrane. The outside of the egg will be a semi-permeable membrane once we remove the calcium carbonate shell with vinegar. By changing the water concentration of the solution around the egg, we can see how water flows in and out of the egg!

This experiment will take a few days to complete entirely. If necessary, you can refrigerate the eggs for a few days after the vinegar treatment to continue the experiment later.

Tip: it might be fun to have an egg from each stage of the experiment to compare – in which case use at least 4 eggs. In case any eggs break it is probably a good idea to try this experiment with a few eggs at a time!

Before starting the experiment, it is good practice to think about what data or information you are going to collect along the way. What kind of measurements might you want to take?  For example, you could try weighing the egg at each stage, or using a string or tape measure to measure the circumference. Tip: Take a picture at each stage for comparison, or leave eggs after each stage that don’t progress so you can see each stage side by side!

Scientists make and record observations during their experiments, so you should make some notes about what you have done and seen. Can you explain what has happened to the egg at each step (vinegar, syrup, water)? Try and make notes of what you noticed, what you measured and any conclusions that you have come to.

Can you explain your observations scientifically?

1. After the vinegar step

2. After the golden/sugar syrup step

3. After the water step

When you put the shell-less egg in  syrup – the syrup has a very high sugar concentration, and a very low water concentration. The egg contains water and vinegar and therefore has a much higher water concentration that the syrup around it. The water therefore flows through the egg’s semi permeable membrane into the syrup, ‘shrinking’ or ‘deflating’ the egg. You may have noticed a layer of this water/vinegar sitting on top of the syrup, this has all come from the egg. If you weighed the egg you will have noticed that it has lost the weight of that water.

When the deflated egg was then put into water, inside the egg there was a low water concentration while the water outside had a high one. Water therefore flowed back into the egg until the concentration was the same inside the egg as it is outside in the water. The egg should again have been similar in size to the egg before you removed the shell.

If you have listened to the talk on Gene Therapy you will have learnt about how important it is to control our salt concentrations properly. When the cystic fibrosis transmembrane conductance regulator (CFTR) is missing from our lung cells due to genetic mutations, or not working correctly, calcium ions build up in the cell. This is because CFTR is a calcium channel that pumps chloride ions out of the cell as they cannot cross the semi-permeable cell membrane without it. As a result, a high salt and low water concentration is created inside the cell. This means that through osmosis, water then flows inside from outside the cell. Because the water is now missing from the cell surface, the outside of the cells where gas exchange happens becomes very dehydrated. The mucus that sits atop of our lung cells keeps losing water and becomes very thick and sticky. It builds up and makes breathing uncomfortable and the perfect place for bacteria to multiply and cause infections that are very hard for our bodies immune systems to fight. To hear more and learn all the new and exciting treatments we are researching for patients like those with cystic fibrosis, check out more of our stem in action talks!