Veronica knew from the age of six that she wanted to work in space, inspired by the Voyager 2 mission. She is now a highly respected comparative planetologist and planetary scientist, who was among the first people to see Pluto up close. She’s inspiring others to look to the stars through her research and work on active missions. 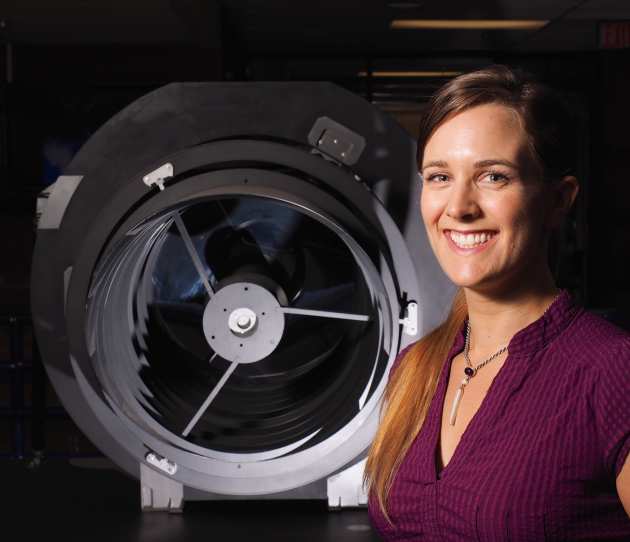 For Veronica, exploring the cosmos and seeing the planets up close was all she ever wanted to do. She remembers being inspired by the Voyager 2 mission that sent back images of Uranus and, a few years later, Neptune.

“When I was six, I remember learning that Uranus is green,” she says. “And then a couple of years later seeing Neptune, which looks the same but is bright blue. I wanted to know why they were different.”

NASA’s Voyager 2 mission, which passed Uranus in 1986 and Neptune in 1989, wasn’t the only inspiration for Veronica’s future career, however. Her older sister was studying for an A-level in Geology around the same time and her rock collection raised similar questions for a young Veronica: why do these crystals and rocks look different?

“I used to interrupt my sister’s A-level revision by bringing her random bits of boring flint from the garden,” she laughs. “I’ve always been a rock hound.”

Her passion for geology and space was only fuelled by the images coming back from the Voyager 2 mission.

“I announced when I was six that I wanted to do ‘something spacey with rocks’,” she says with a smile. “When I started working towards it, I didn’t actually know that there was a job at the end that combined what I liked.”

But this is what she’s found in her current role as a comparative planetologist and planetary scientist.

Veronica's day to day work is split between spacecraft operations and various planetary research projects. She currently works as a Spacecraft Operations Engineer for NASA’s High Resolution Imaging Experiment (HiRISE), as well as working as an Associate Staff Scientist at the Lunar and Planetary Laboratory (LPL) at the University of Arizona. 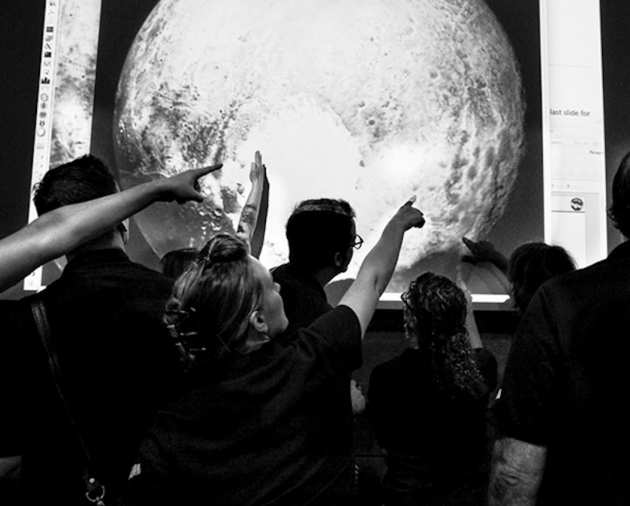 Before leaving the UK to move to the US, Veronica studied for her PhD in Planetary Science – Earth Science and Engineering Research at Imperial.

Having completed her Masters at UCL, Veronica had the choice between this institution and Imperial for her PhD studies. She was drawn to Imperial for two reasons: because she wanted to make new contacts in the field of planetary science and because the project she would be working on was more multifaceted.

She also found mentors at Imperial in the form of her two PhD supervisors: Professor Joanna Morgan and Professor Gareth Collins. They were at different stages of their careers and both provided Veronica with valuable guidance.

“Joanna was female, fully established and in command of all of these massive projects, and Gareth was a postdoc who became my unofficial advisor,” she explains. In Gareth she found a role model for her early career, and in Joanna an important female role model.

“They were both very constructive, calm and kind with their criticism, but they were very detailed. They showed me how to be an advisor but also gave me different things to aim for at different points in my career,” she says.

Shooting for the stars

Her career has involved some incredible projects. One of the most notable was Veronica’s invitation to be one of just two international collaborators on the New Horizons mission to Pluto.

“Professionally, I think it will be hard to beat, because it was exactly what I imagined when I was six. This idea of standing in a dark room with a gigantic screen in front and seeing an image of a never-before-seen place,” she reveals.

But she also describes seeing Pluto as “weirdly personal”, a feeling that was shared by the whole New Horizons team. “It sounds really weird, but it felt like it was just me and Pluto. It was like a person who had been out on the edge of the solar system alone that I was personally meeting for the first time,” she explains.

While Veronica loved her time on the New Horizons mission, she admits that working on active missions like this can be nerve-wracking.

The New Horizons satellite was launched in 2006, but didn’t reach the Pluto system until 2015. Veronica explains that due to the speed, it was a fly-by mission, rather than an orbital mission, which means you only have one chance to capture the images that you need.

"Most of the work I do is orbital, so if you miss your target you can always get it tomorrow, or in a couple of weeks’ time. But because New Horizons was a fly-by, we had to send home fail-safe images before we entered the Pluto system, in case we crashed into anything on the way and lost all of the data."

“It’s nerve-wracking because you don’t know whether the satellite has survived. It was silent for 13 hours because it was busy taking all of the recordings, and then the call home signal took 4.5 hours to get back to Earth.”

When asked if she recognises that she’s at the forefront of planetary science, she smiles and reveals that it’s often only when an image captures the public’s attention that she’s reminded how amazing her work is. 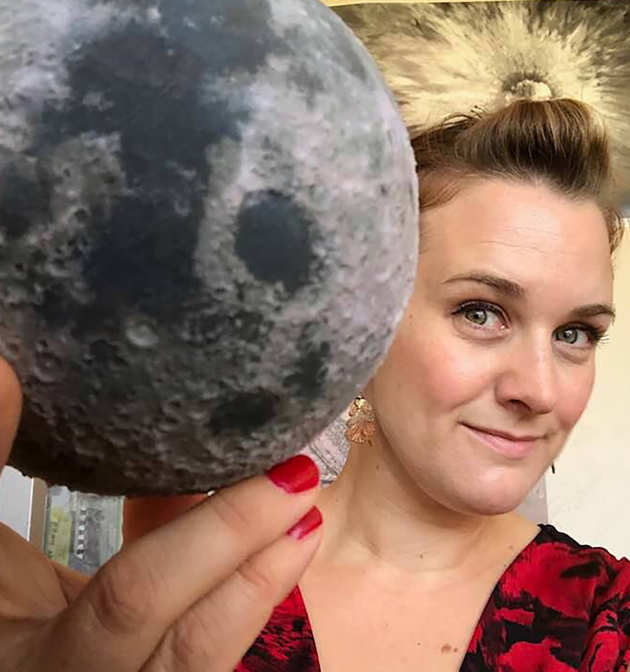 “I remember when I was younger, those active missions are what captured me, so when I’m involved in them, I know that there’s a horde of people being inspired by it, and that’s really nice to remember,” she says.

The other way in which Veronica works to inspire others is through her outreach work to schools. She regularly gives public lectures and visits schools to talk to them about her research and feels it’s an important part of her role.

“On a selfish level, it reminds me how to explain things in a useful way,” she laughs. “But it’s fun and it also keeps my enthusiasm up. Until I go to these events, what I’m doing is just work. But when other people say things like, ‘wow, this is so cool’, it’s re-energising.”

She particularly enjoys her outreach work with primary school children and thinks it’s especially important to encourage more women into planetary science. She reveals that she’s faced some challenges because of her gender, but stresses that things are improving.

Veronica also says that having Professor Joanna Morgan as a strong female mentor in the early stages of her career helped encourage her when she faced any setbacks, and she hopes to do the same.

"When I do outreach with younger children, I wear my hair down so that they can see I’m a NASA scientist and I’m girly. I want to show them that it’s possible, because it really helps to see what you can attain."

Her top advice for anyone who wants to get into the field of planetary science is to go after what you want and not to be afraid to ask for opportunities.

In fact, being bold is how Veronica got her first job in the field of astronomy. “When I was 17, I got a job at the UCL regional planetary imaging facility by tagging onto a tour group at an observatory, and then peeling off, finding offices and asking a random person for a job,” she says with a smile.

A world of collaborators

Not being afraid to ask for what she wants is also how Veronica got her job as a targeting specialist on the NASA and LPL HiRISE project. This project collects images of Mars, which are requested by both the scientific community and members of the public.

Veronica feels that having public input is particularly valuable for a number of reasons: “Firstly, it’s an unlimited number of collaborators, who all think different things and have different ideas,” she explains.

"The science team request targets to answer their specific questions. But having the public suggestions gives us a wide smattering of interests and targets, and this keeps us on-mission to truly be exploring Mars."

But there’s another reason she likes the fact that anyone can request an image of an area of Mars. “It’s nice to know that people are having the same kind of personal experience that I had with Pluto,” she states. “When a HiRISE image comes down, it’s viewed by a few people in my team and then the suggestor receives an email telling them that their image has been acquired. They’ll usually be in the first five people ever to see that area of Mars, and that’s a wonderful feeling.”

Through her work in mission operations on HiRISE and her scientific research, she has an unusual and highly useful blend of skills that allows her to translate between the scientific and engineering elements of projects. She’s keen to continue to be involved in active missions, but reveals that the future missions she works on will be different to her previous work.

For example, Veronica has been working on an instrument for a lander mission to Jupiter’s moon Europa. “Now that we’ve flown by and orbited a lot of bodies in the solar system, it’s starting to be more lander work, so I’m excited to be moving towards developing a Europa Lander and other icy world landers,” she says.

Dr Veronica Bray Durfey graduated from Imperial with a PhD in Earth Science & Engineering in 2009. She was a winner of the Emerging Alumni Leaders Awards in 2020.

Dr Veronica Bray Durfey is the recipient of our inaugural Emerging Alumni Leaders Award in 2020. This award recognises and celebrates alumni under the age of 40, who are remarkable leaders in their field, have demonstrated outstanding achievements or are making a substantial impact on society.