What are the world’s countries doing about climate change?

In December 2015, 195 states signed up to the Paris Agreement. This is the most important pact for international cooperation on tackling climate change, and countries are taking steps to deliver on it. The UK, Norway, France and New Zealand are some of the countries that have legally committed to reach net zero emissions by 2050. But are countries actually on track to achieve the Paris Agreement targets?

This section explains how the Paris Agreement works and why COP26 in Glasgow, UK, is the time the nations of the world are next expected to step up their ambition levels. It also looks at the UK’s role in tackling climate change, and explores why there are benefits from taking a lead in reducing emissions.

What are countries doing

How have the world’s nations agreed to act on climate change?

In December 2015, 194 states and the European Union signed up to the Paris Agreement. This is the most important pact for international cooperation to tackle climate change[1]. By signing the Agreement, the world’s nations have committed to limit the increase in global warming to 'well below 2°C', with a goal to keep it to 1.5°C[2].

They also set an aim for global emissions to peak as soon as possible, and then achieve a balance between human emissions produced and the removal of greenhouse gases from the atmosphere in the second half on the century; resulting in what is called ‘net zero emissions’. Developed countries have also committed to provide more financial support for developing countries to act on climate change.

By signing the Agreement, countries have committed to submitting and delivering on their own voluntary  pledges that set out how they will lower their emissions and adapt to climate change. These are known as Nationally Determined Contributions (NDCs). The pledges are monitored through an international mechanism that reviews collective progress on the goals of the Agreement. This is the ‘global stocktake’ which will first happen in 2023, and then subsequently every five years.

Countries are legally bound to submit their pledges under the Paris Agreement. Delivering the pledges, however, must be ensured and enforced through national laws and policies. By publicising the different national pledges transparently, the Agreement makes it possible to hold states accountable if they fail to deliver on their promises. The global stocktake mechanism also puts pressure on countries to increase their level of ambition over time, by regularly reviewing progress on the shared global goals.

Are countries on track to meet the 'well-below 2°C' target in the Paris Agreement?

The 2015 Paris Agreement committed each of its 195 state signatories to pledge what they will individually do to reduce or limit their greenhouse gas emissions by 2025 or 2030; their so-called Nationally Determined Contributions (NDCs). Taken together, however, the current NDCs of all nations are not enough to put the world on track to limit global warming to ‘well below 2°C’[1].

Instead, analysis published by Climate Action Tracker estimates that the current NDC pledges for 2030 are consistent with a global emissions pathway that would lead to a world that is 2.4°C warmer on average at the end of the century, than it was at pre-industrial levels[1]. This is far from being in line with the Paris Agreement, which aims to limit warming to well below 2°C and pursue best efforts to keep it to 1.5°C.

The Paris Agreement explicitly requires each country to revise its pledge and increase its ambition every five years, effectively creating what is called a ‘ratchet mechanism’. Countries agreed at the Paris climate change summit in 2015 to submit revised NDCs by 2021 at the latest, at the 26th session of the Conference of the Parties (COP26) was held in Glasgow, UK, and was postponed from its original date of 2020 due to COVID-19.

Countries were expected to pledge new and more ambitious NDCs ahead of COP26, bringing their actual plans for emissions reductions by 2030 into line with the targets of the Paris Agreement. However, as explained above, countries’ pledges for 2030 still amount to 2.4°C warming. To close this gap, COP26 ended with plans being made for countries to return at COP27 and update their NDC pledges again, rather than wait the originally planned five years.

Steps in the right direction are also being taken by countries that set targets for reaching net-zero emissions of CO2 and other greenhouse gases. Sweden and Norway were some of the first countries to legally commit to net-zero targets, and the UK was the first of the G7 major economies to do so with a commitment to reach net zero greenhouse gas emissions by 2050, closely followed by France. In 2020, China committed to reaching carbon neutrality by 2060, while South Korea and Japan committed to net zero emissions by 2050. Chile and Fiji are also among the countries to have proposed net zero targets, which are pending legislation[2]. Net zero targets have gained increased momentum, and analysts suggest that from November 2021, 90% of global GDP was covered by net zero pledges.[3]

Actually reaching these targets, however, requires rolling out credible policies for reducing emissions immediately. While the UK has set a target for net-zero emissions by 2050, it is currently not set to meet its emission reduction targets for the periods 2023-27 and 2028-2032 respectively. While emissions in the UK power sector have reduced significantly, policies across the rest of the economy are not on track to lower emissions as needed[4]. 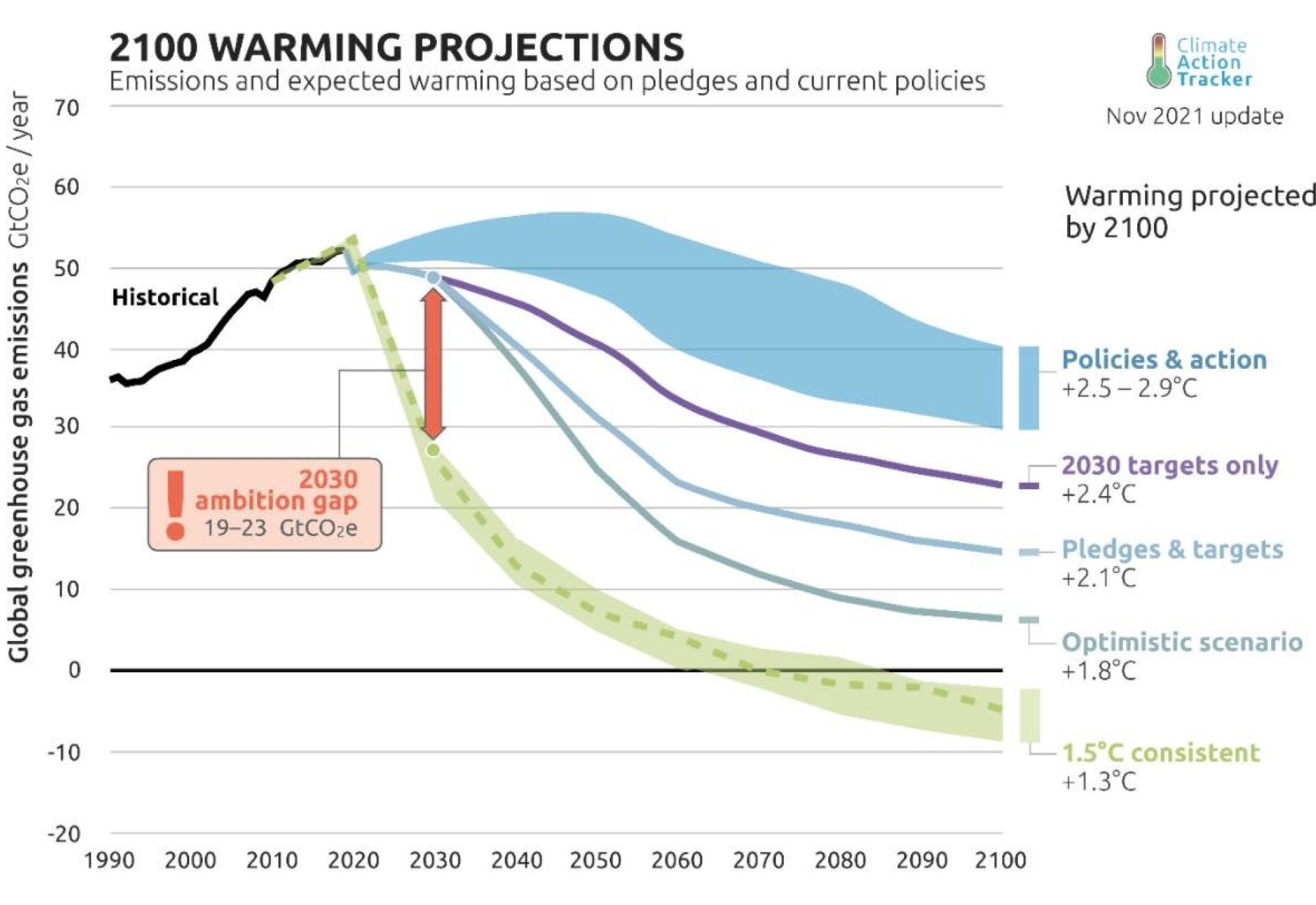 Why should the UK take stringent action on climate change, when other countries are larger emitters and do less to reduce their emissions?

Limiting global warming to 1.5°C above pre-industrial temperatures means CO2 emissions need to reach net zero by 2050. This will need to happen in every country, no matter how small or large. The nature of climate change means emissions have global impacts, and so a global collaborative response makes the challenge easier and cheaper to overcome in the long-run[1].

How major emitters are acting on climate change

The world’s countries have all signed the Paris Agreement, including major current and future emitters of greenhouse gases such as China and India. These countries are already acting on climate change, and are increasingly seeing that opportunities exist for them and their citizens in building a zero-carbon future and a growing, green economy.

In 2020, China committed to reaching carbon neutrality by 2060, as well as reaching a peak in its CO2 emissions before 2030, although recent studies suggest they may achieve this much earlier[2],[3]. The country reduced coal mining capacity by 400 million tonnes since 2016, with aims to reduce it further by 2020[4],[5]. Thanks to this reduction and to large increases in renewable energy generation, as well as measures to improve energy efficiency, China’s consumption of coal and associated emissions appears to be plateauing. China is also leading the world in electric vehicle (EV) production and sales, with its auto sector making a positive impact on other sectors by advancing innovation and bringing down costs for EVs around the world[6].

However, while these actions have contributed to reducing the rate at which Chinese emissions are growing, the actual level of emissions are still increasing due to investment in new coal-fired power stations and the use of fossil fuels in industrial sectors like steel and cement[7]. China’s investments in fossil-fuel based infrastructure in neighbouring countries through the Belt and Road Initiative are also likely to cause a lot of additional greenhouse gas emissions[8].

India had set a target to install 175 gigawatts of renewable energy generators by 2022 but is now set to surpass this goal and extend it to 480 gigawatts[9]. This success comes from costs falling quickly and strong government support for renewable energy. Implementing renewables policy continues to be challenging, however, due to differences in regional governance structures and many regions relying heavily on revenues from coal markets[10].

In the United States, another major emitter, emissions levels have started to decline since 2005, although energy-related carbon dioxide emissions rose between 2017 and 2018[11].  The decision by President Donald Trump to withdraw from the Paris Agreement took effect in November 2020 and represented a setback for climate policy in the United States[12]. However, the Biden Administration returned the US to the Paris Agreement in 2021.

Beyond climate action at the national level in the United States, many states, businesses and cities continue to take the threat seriously. The ‘We Are Still In’ Coalition, for example, brings together more than 3,500 major business leaders, governors, mayors and institutional representatives that are committed to the Paris Agreement[13].

The UK’s opportunity to lead on climate change

As local action in the United States grows and major national emitters like China and India increase their actions towards tackling climate change, the global market for zero-carbon goods and services will also grow. By taking early action to decrease its emissions, the UK can get ahead in the zero-carbon transition and increase its economic competitiveness. This brings new investment opportunities and positions the UK ideally to compete and prosper in the market for zero-carbon goods and services - one of the world’s fastest growing markets. It also brings associated benefits such as lowering air pollution levels and people switching to healthier, more plant-based diets, which in turns lowers costs for the National Health Service[14].

The UK has already been successful in enabling economic growth alongside taking climate change action. Since 1990, the UK’s economy has grown by around 75% while greenhouse gas emissions have reduced by 44%[15]. Analysis suggests that, so far, taking action on climate change earlier than other countries has not limited the UK’s economic success[16]. By leading in markets for new, less-polluting products, the country can instead set an example of the way to a low-carbon future.

Some analysts also suggest that the UK should lower its emissions faster than other countries because of its historic responsibility for causing climate change. To date, the UK is one of the largest per person contributors to present climate change – behind the United States, Canada and Russia, and equal to Germany[17]. This is one of the reasons why the UK’s Committee on Climate Change recommended the UK should be more ambitious on climate change than the world as a whole and set a target for achieving net-zero emissions by 2050 at the latest[18].

[1] IPCC. (2018): Summary for Policymakers. In: Global warming of 1.5°C. An IPCC Special Report on the impacts of global warming of 1.5°C above pre-industrial levels and related global greenhouse gas emission pathways, in the context of strengthening the global response to the threat of climate change, sustainable development, and efforts to eradicate poverty [Masson-Delmotte, V. et al (eds)]. World Meteorological Organization, Geneva, Switzerland, 32 pp

[14] Jennings, N. et al. (2019). Co-benefits of climate change mitigation in the UK: What issues are the UK public concerned about and how can action on climate change help to address them? Grantham Institute on Climate Change and Environment, Imperial College London.

Read more about these topics by exploring the explainers published by our sister institute, the Grantham Research Institute at LSE:

What is the Paris Agreement?

The Paris Agreement was a landmark document produced at COP21 in 2015. Read more here.

What are the Sustainable Development Goals (SDGs)?

The SDGs are a universal set of goals, targets, and indicators that focus on development. Learn more here.

What is climate finance?

Learn more about the diverse concept of finance for climate change-related activities.

What is the state of international climate talks?

Find out more about global progress on achieving the Paris Agreement goals.

[Image by DENNIS SCHROEDER / NREL is licensed under CC BY-NC-ND 2.0]