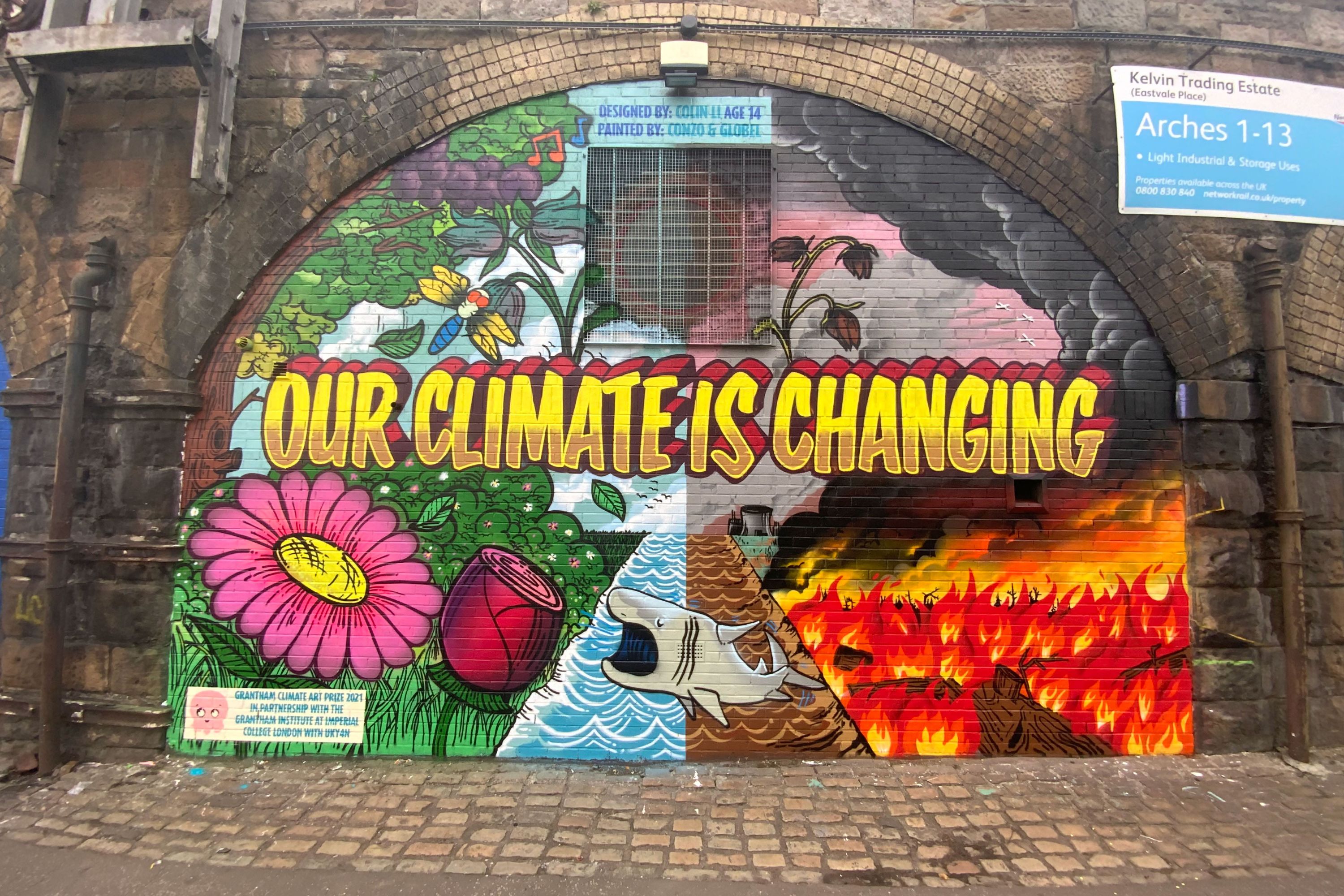 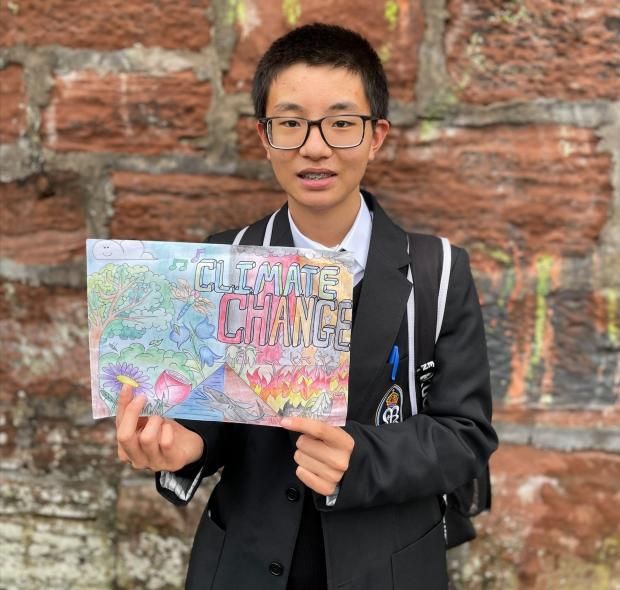 young people focused on climate change and local at risk species were transformed into street murals across the UK by professional artists in the Grantham Climate Art Prize 2021. Glasgow’s winning design by fourteen-year-old Colin Li (pictured – inset) was scaled up by artists Ciaran Globel and Conzo Throb close to the Scottish Exhibition and Conference Centre in Glasgow where the UN Climate Change Conference (COP26) was held. The prize was sponsored by Octopus Energy and supported by UK Youth for Nature. An eighth mural was created in a pilot project, where young people at two schools collaborated with artist Bryony-Benge Abbott.

Central to the Grantham Institute’s mission is engaging decision-makers with scientific evidence and expert analysis from Imperial College London – consistently rated amongst the world’s best universities. The UK’s Presidency of COP26 and the publication of Intergovernmental Panel on Climate Change (IPCC)’s 6th Assessment Reports have increased the potential for this impact and influence to go global, and brought the attention of the world’s media to the issues we care most about.

During 2020–21, we made presentations, publications and policy discussions accessible to international, national and local decision-makers. We covered topics from climate change and mental health to improving transport policies.  We contributed to hundreds of print, digital, radio and TV reports, including an unmissable BBC One documentary following young climate activist Greta Thunberg. The Grantham Climate Art Prize 2021 created powerful street murals highlighting the importance of local biodiversity to people across the UK. We are proud that our Director of Policy and Translation, Alyssa Gilbert, was awarded an Imperial College President’s Award for Leadership in Societal Engagement in recognition of the impact and influence that she and her team have delivered over recent years. 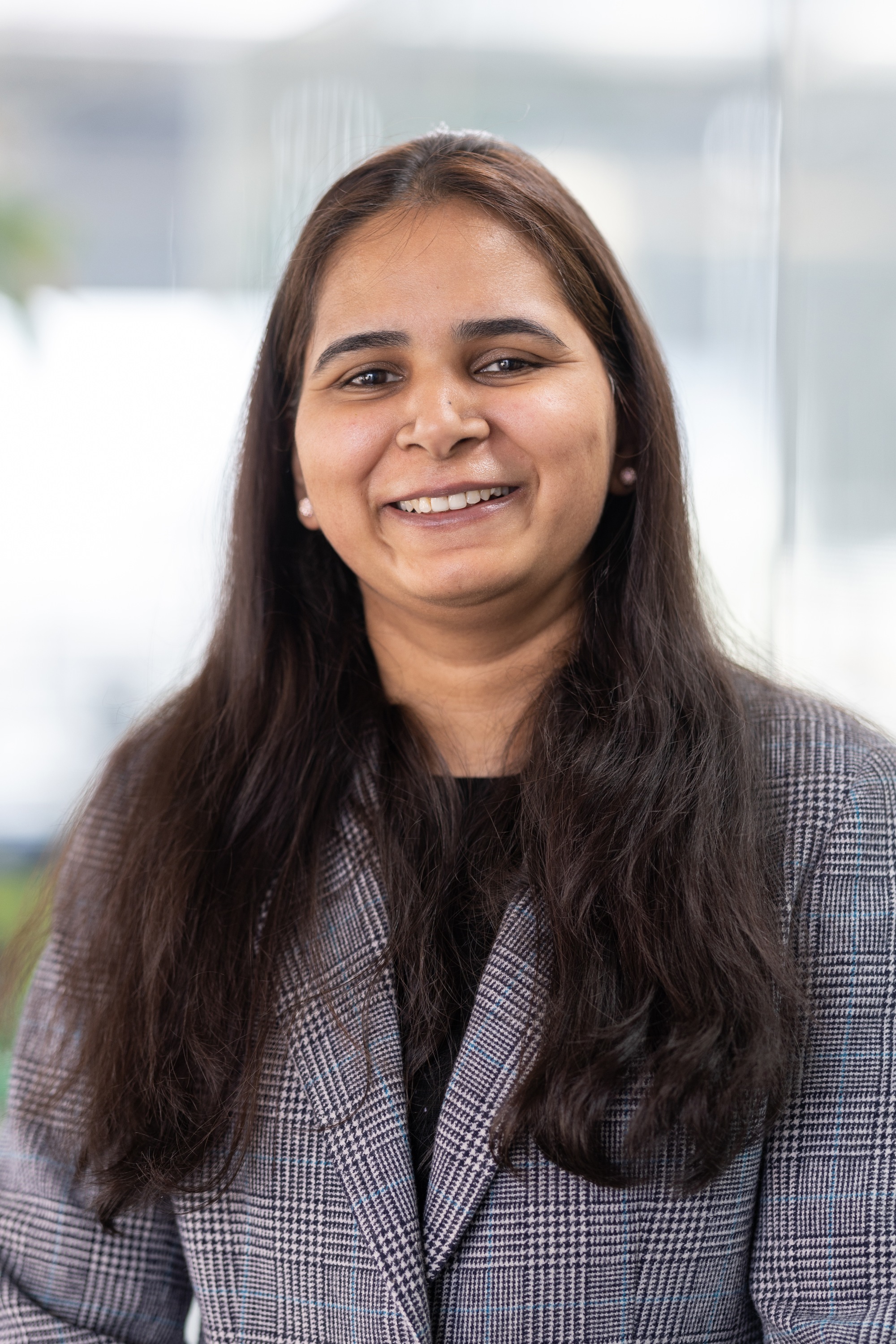 Growing up in northern India, Dr Shivika Mittal studied at night for her exams with a solar powered lamp. She went on to work in textile manufacturing for Adidas and saw the impact on the environment and human health as she travelled south seeing water polluted by fabric dyes. Becoming concerned about the impacts of pollution particularly on low-income groups, she started working in environmental policy.

Dr Mittal, who has worked at the Grantham Institute for two years, says: “Climate change is not a local problem – it is a global problem, but local people do not have voices in this or resources to manage the impacts.” She recently completed new research investigating the impacts of India’s targets to phase down coal on the Indian railways, Coal India Limited and India’s largest power company NTPC (formerly National Thermal Power Company Limited). She says: “India was criticised for negotiating to ‘phase down’ instead of ‘phase out’ coal at COP26. Millions of people work in the coal industry and India cannot phase out coal without investment support because this will affect its economic development and services the government provide including education, healthcare and green energy projects.”

Dr Mittal is a contributing author to the IPCC Working Group III upcoming report and was one of the authors of a study questioning the likely global temperature if current policies are implemented and if Nationally Determined Contributions targets are reached. She explains: “In neither case are we limiting warming to 1.5°C.” She recently contributed to a paper on the global potential for energy from solar power, which mapped roof top hotspots. 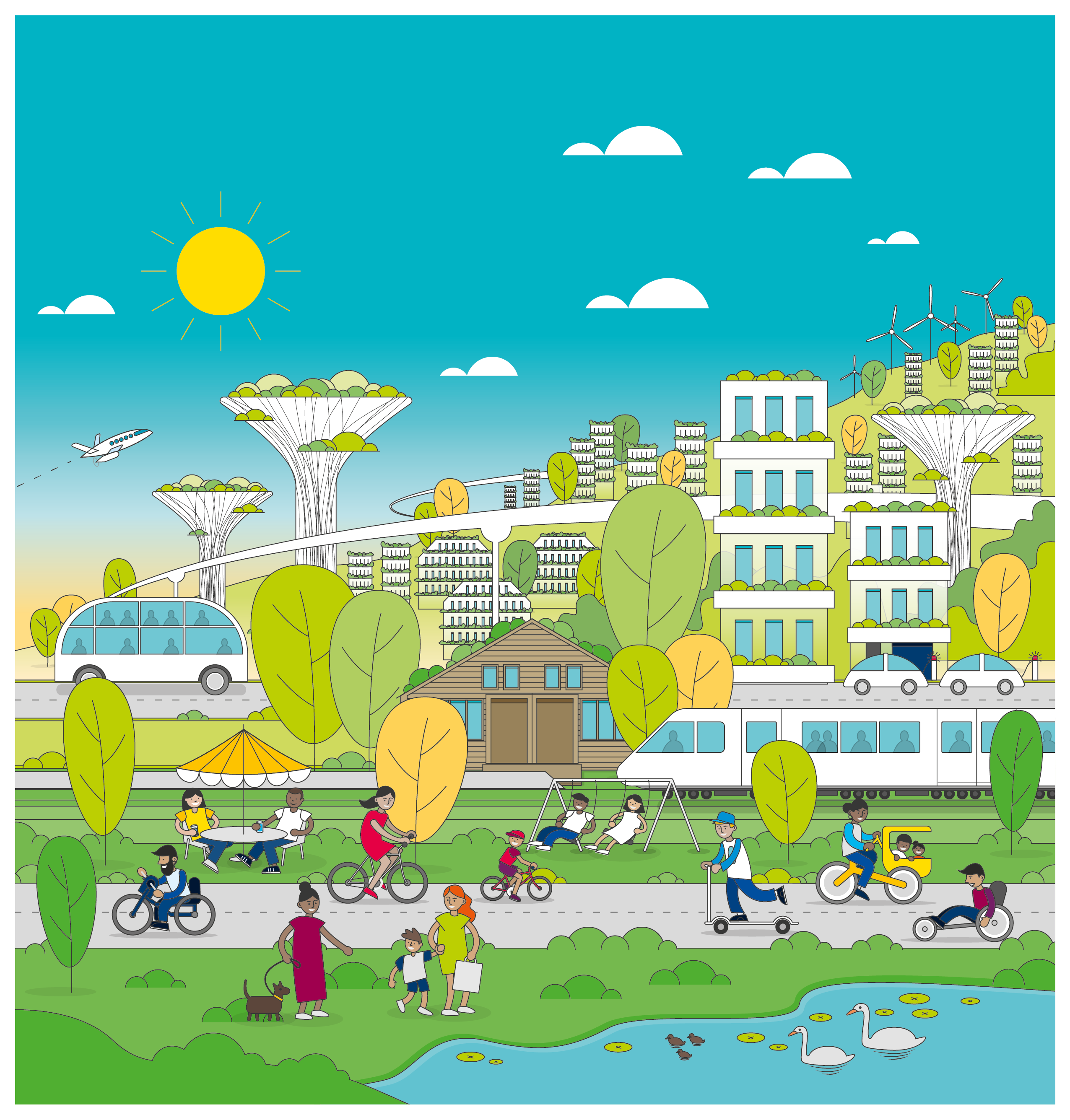 Research from Imperial and the Grantham Institute is shedding new light on what the road to net zero emissions looks like for a large emitter: the transport sector.

In a new report published ahead of COP26, Imperial researchers explained that altering our transport systems fundamentally, rather than simply tinkering at the edges – such as through changing the types of cars we drive, for example – will have the biggest impact in cutting emissions from the sector.

“Some sectors of society have seen emissions reductions, but any progress has been swamped by other sectors that have increased their emissions – the global transport sector being one of them,” said Dr Drew Pearce, who is the lead author of the report.

To share the recommendations from the report, the authors hosted a roundtable for policymakers from the Department for Transport, the Government Office for Science and Transport for London, as well as industry representatives and third sector organisations.

Here they discussed how the least polluting motor vehicles are the ones you don’t use, meaning that reducing transport emissions will be easier if fewer journeys are taken in the first place. That makes it a top priority to encourage more people to a switch car journeys to walking, cycling and public transport, as well as incentivising more efficient use of existing transport modes. 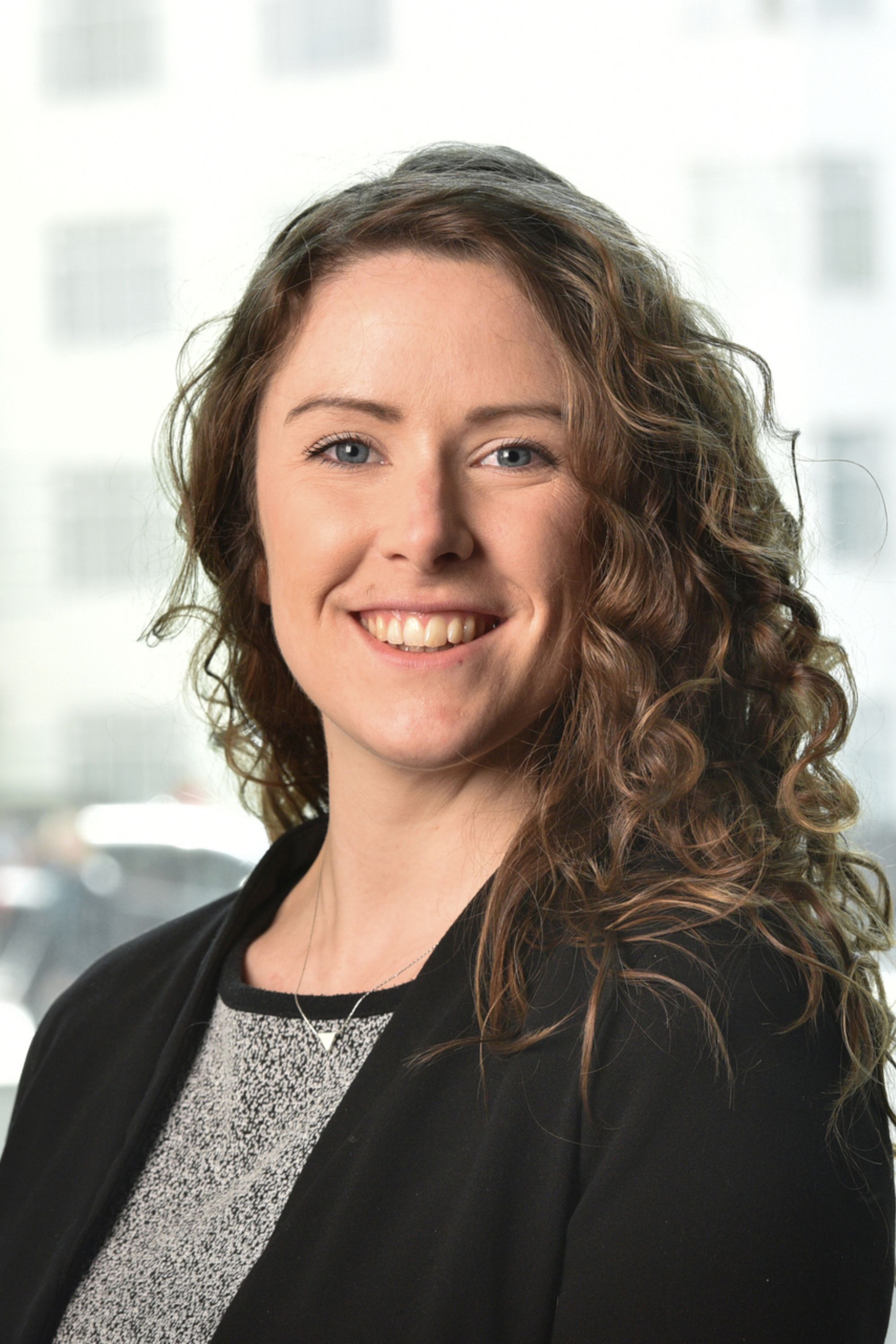 Grantham Institute researchers Dr Jeff Hardy and Dr Madeleine Morris (pictured) are part of a £9.8 million research consortium named EnergyREV that is called on by the government’s Department for Business, Energy and Industrial Strategy (BEIS) to provide input into its policymaking process around smart energy.

Dr Morris says, “This is a multi-way engagement aimed at determining the best way forward for smart energy, including conversations and workshops with stakeholders from government, industry trade bodies, regulators and consumer groups and the evidence we discuss comes from research papers and our reviews.”

Input also comes from three ‘demonstrator’ projects and ten ‘detailed design’ projects across the UK that use smart technology to link up local producers of renewable energy and electric battery owners with energy users such as electric home heating and public transport.

“You can already see the influence of our work in the Government’s Smart Systems and Flexibility Plan 2021, which we helped shape. The plan sets out how we will transition to a smart, flexible, decarbonised energy system,” says Dr Morris.

Slow progress is being made in closing the gap between pledges and emissions reductions necessary to keep global warming below even more dangerous levels, but the situation is still far from sufficient.

That was the headline assessment from the 2021 UN Environment Programme’s (UNEP) yearly Emissions Gap report, which analyses countries’ climate pledges for 2030 in relation to what is required for the Paris Agreement, and for which the Grantham Institute’s Director of Research Dr Joeri Rogelj led several chapters.

Dr Rogelj said: “For the first time, the most optimistic interpretation of all pledges that are put on the table add up to global best estimate warming just below 2.0°C over the course of this century. That is not yet in line with keeping warming ‘well below’ 2°C or 1.5°C but encouraging nevertheless.”

Dr Rogelj stressed that net-zero pledges have not yet translated into the action that’s needed. “After the promises, we now need plans and policies to deliver on the emissions reductions,” he said.

The Swedish climate activist Greta Thunberg speaks truth to power and demands that governments follow the science to act urgently on climate change.

In April 2021, the BBC aired a 3-part documentary following her around the world during her year out from school as she travels, first to Madrid to participate in the COP25 climate summit, then to the World Economic Forum in Davos, and finally into 2020 when COVID-19 forced a change of plans.

The Grantham Institute’s Dr Ajay Gambhir (pictured) featured in the documentary alongside interviews with other leading climate scientists and economists from all over the world.

He spoke about the falling cost of clean energy, the need to remove subsidies from fossil fuels, and our rapidly diminishing ‘carbon budget’, which sets the limits for how much carbon dioxide human activities can emit before the Paris Agreement temperature targets are breached.

Quick reads: Ones to watch

The global rock band Coldplay are partnering with Imperial experts to quantify the environmental impact of their upcoming world tour. Dr Jem Woods is leading the project, which aims to understand the carbon footprint of Coldplay’s upcoming international tour and offers suggestions of how to reduce its environmental impact further in the future. The research will also explore how impactful the band’s messages about environment and sustainability are at influencing positive changes in their fans’ behaviour.

Across Africa, food security is in jeopardy as rainfall fluctuates and temperatures change. Looking ahead to COP27 in Egypt, Malabo Montpellier Panel Research Associate Meera Shah calls for food and agriculture to take centre stage in the upcoming climate change negotiations. Based on her research, she sets out key steps that should be taken to harmonise food and climate policies for Africa to strengthen food system resilience across the continent.

Dr Robin Lamboll is researching the potential trade-off between making charitable donations to support people immediately suffering or taking actions that halt climate change and so will help people in need, and others, in the longer term. Results highlight the importance of considering the possible long-term impact of climate change on growth when making these comparisons.