Visible across London, the Queen's Tower is at the heart of Imperial's South Kensington campus.

When do the Queen's Tower bells ring?

The bells are rung on Royal Anniversaries by the Ancient Society of College Youths, between 13.00 and 14.00

The Queen's Tower is all that remains of the Imperial Institute, which was built to mark Queen Victoria's Golden Jubilee in 1887. The Imperial Institute was established by Royal Charter for the purpose of carrying out research into the resources and raw materials of the Empire and to provide a meeting place for overseas visitors. It was administered by a Governing body with the then Prince of Wales as President.

The Imperial Institute was designed by T E Collcutt in the neo-renaissance style. It was 700 feet long with a central tower (the Queen's Tower) and smaller towers at the east and west ends. It contained a library, laboratories, conference rooms and exhibition galleries with gardens at the rear. Construction work took six years and the Institute was opened in 1893.

From the outset, the Institute was not a great success and in 1899, the University of London took over half of the building as administrative offices. This arrangement continued until 1936 when they moved to their present site in Bloomsbury.

Between 1902 and 1953, the Imperial Institute was the subject of various committees of enquiry and changes of administration. At various times the Board of Trade, the Colonial Office, the Department of Overseas Trade and Ministry of Education all ran the Institute. In 1953 the government announced the scheme for the expansion of Imperial College and by 1956 it was public knowledge that this would involve the demolition of the Imperial Institute.

There was considerable opposition to this from the Royal Fine Arts Commission and other bodies, as a result of which it was decided to retain the central tower.

Partial demolition began in 1957. In 1958, the Imperial Institute changed its name to the Commonwealth Institute and in 1962 it moved Holland Park, on the site of the Design Museum. The main demolition work could then begin and this continued until 1967.

Between 1966 and 1968, work was carried out to enable the central tower to stand on its own. This involved creating massive foundations and then substantially rebuilding the lower portion of the tower.

The Queen's Tower has since been in the custody of Imperial and can be seen from various points around London.

The Queen's Tower is 287 feet tall, clad in Portland stone and topped by a copper covered dome. There are 324 steps from the ground to the base of the dome. Much of the route to the top is via narrow spiral staircases.

On the lower staircase walls is a display of terracotta medallions commemorating famous scientists. The building used to house a marble statue of Queen Victoria. Commissioned by London University in 1888 to mark the Golden Jubilee, it remained there when the University administration moved to Bloomsbury in 1936. The statue was moved to Imperial's Main Entrance in the late twentieth century.

Half way up the Tower one can see the remnants of the water tank for the Imperial Institute. The tank itself has gone but the massive compound beams which supported it remain.

The belfry contains the Alexandra Peal of bells, the peal consists of 10 bells and is named after Alexandra, the Princess of Wales. The bells were a gift to the Prince of Wales from Mrs Elizabeth M Millar of Melbourne, Australia in 1892. Each bell is separately named after members of the Royal family - Queen Victoria, her three sons, her daughter-in-law Alexandra and her five Wales grandchildren.

The viewing gallery presents an unrivalled panorama of London. The absence of tall buildings in the vicinity of the Tower means that there is an uninterrupted view of London in all directions. It is estimated that the furthest visible point is 20 miles away in good viewing conditions. The Tower is not open to the public at present.

The internal wooden structure of the dome is an interesting example of Victorian craftsmanship. On the upper stone cornice are inscribed the names of those who built the tower and an inscription which reads:

"The stones on this top cornice of the Queen's Jubilee tower were fixed on the 17th day of November 1892 by the persons whose names appear on them and who have all been closely associated with the work from its commencement." 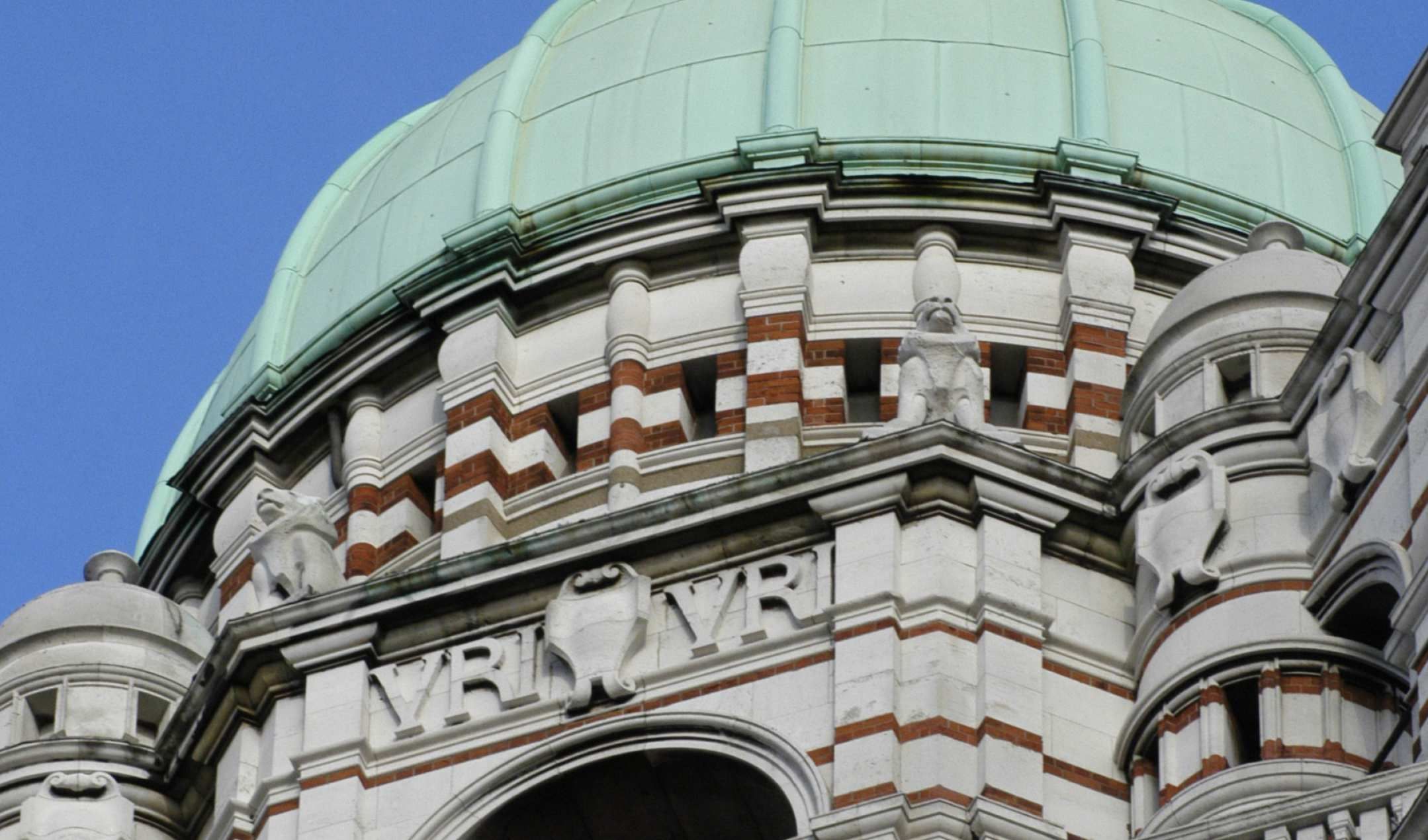 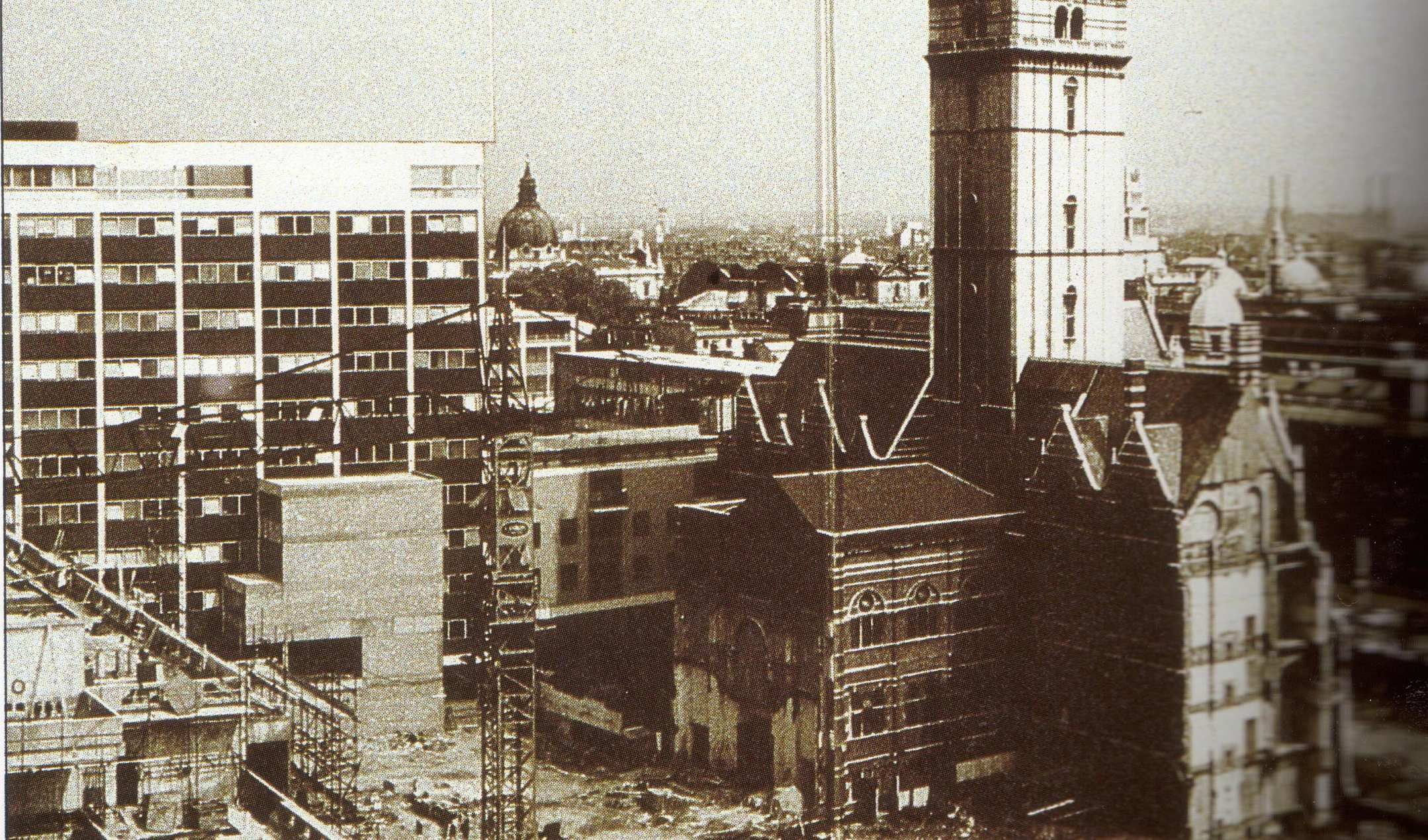 The tower in the 19th century when it was part of the Imperial Institute. 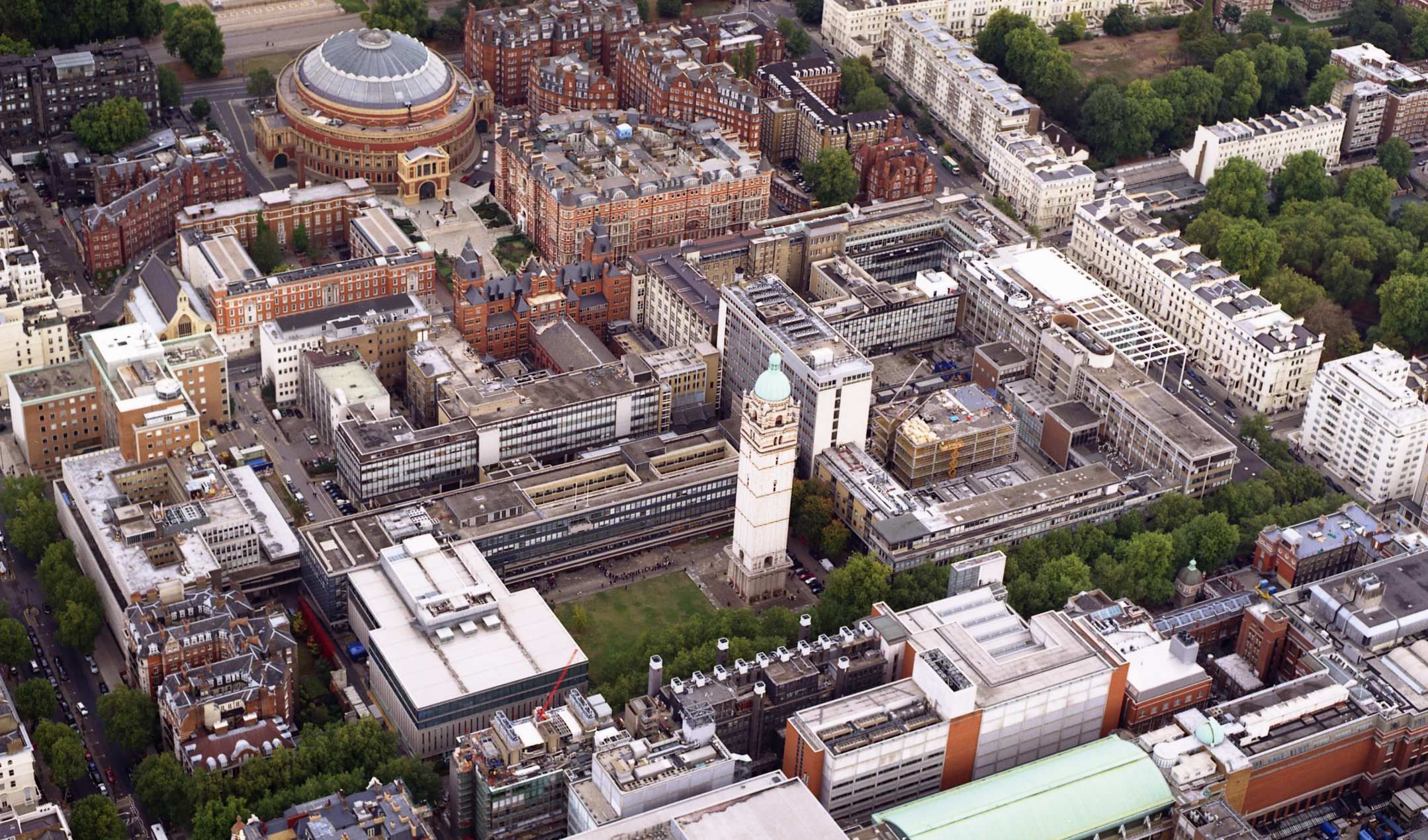 Aerial view of the tower. 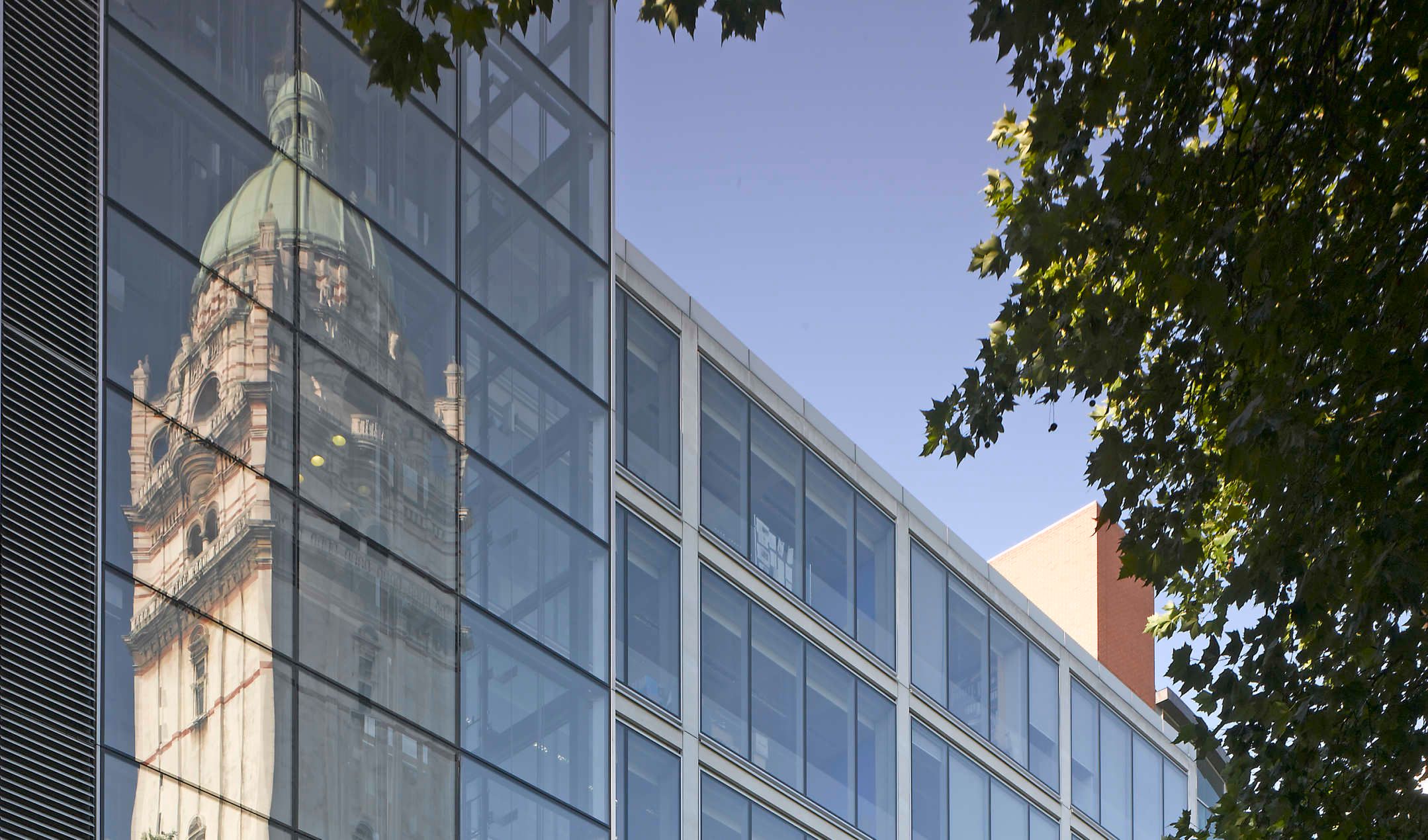 The Queen's Tower reflected in the Sir Alexander Fleming Building.

The remains of the Queen's Tower during the demolition of Imperial Institute. 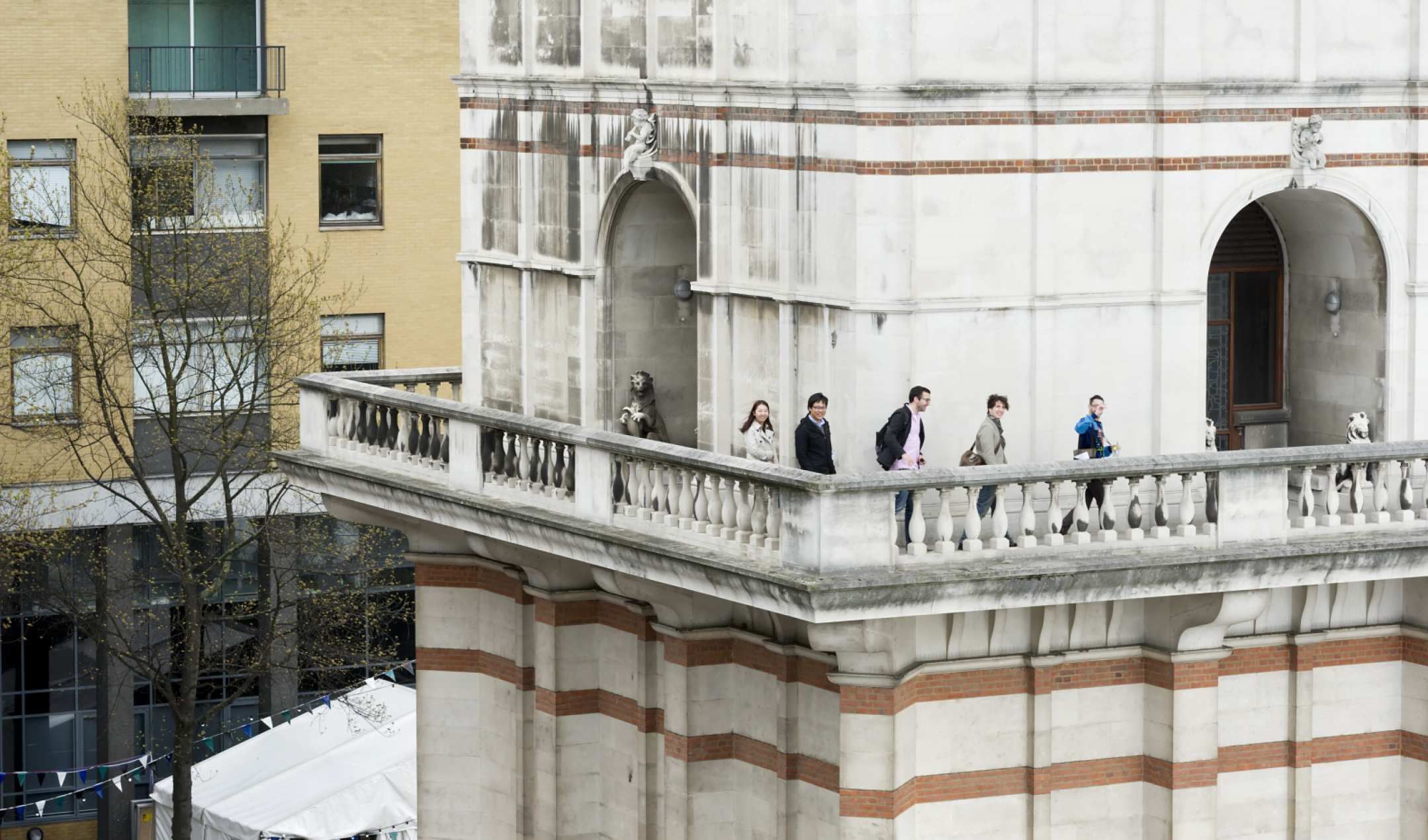 Alumni enjoying a guided tour of the Queen's Tower. 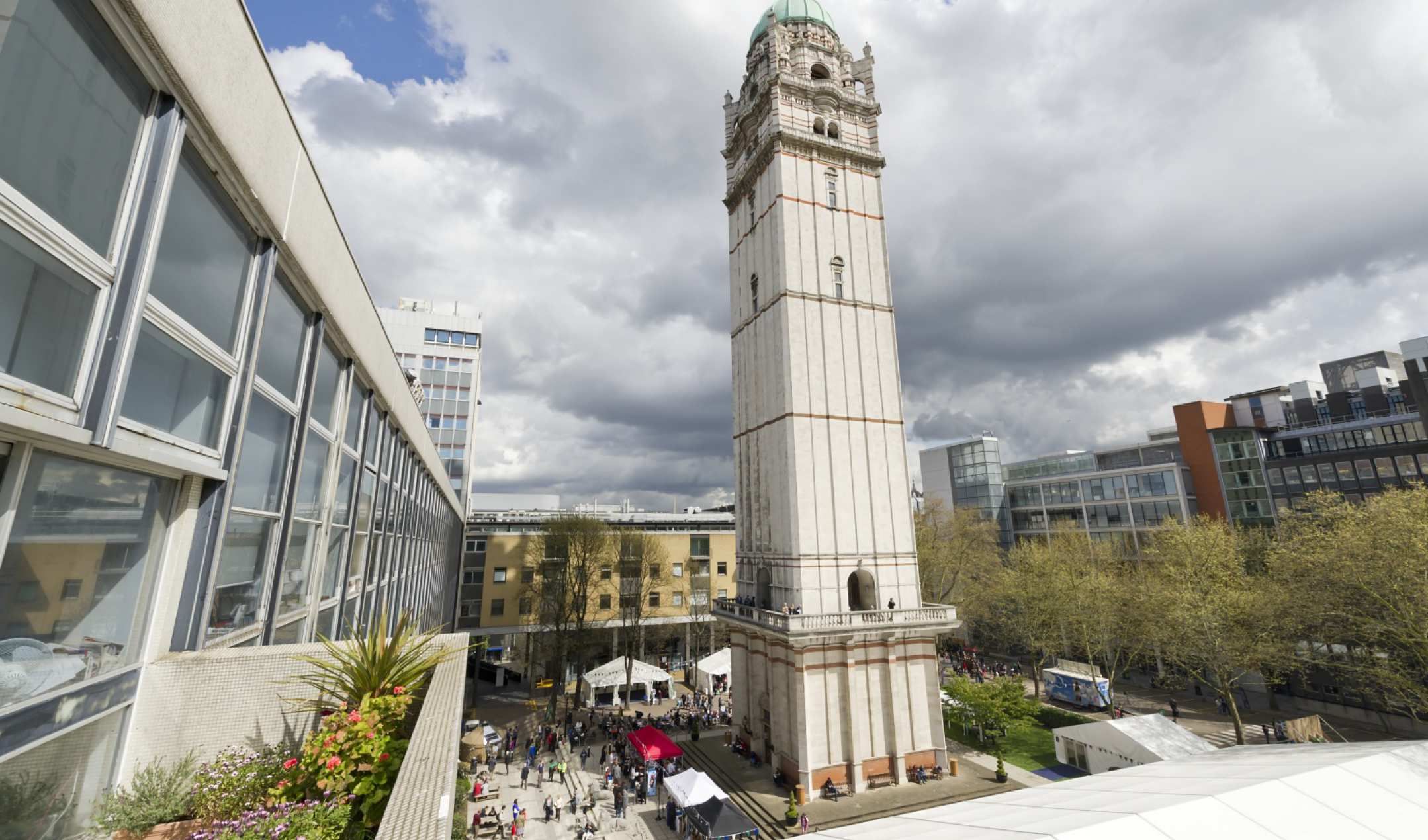 Many activities, events, markets, festivals and parties take place at the foot of the Queen's Tower. 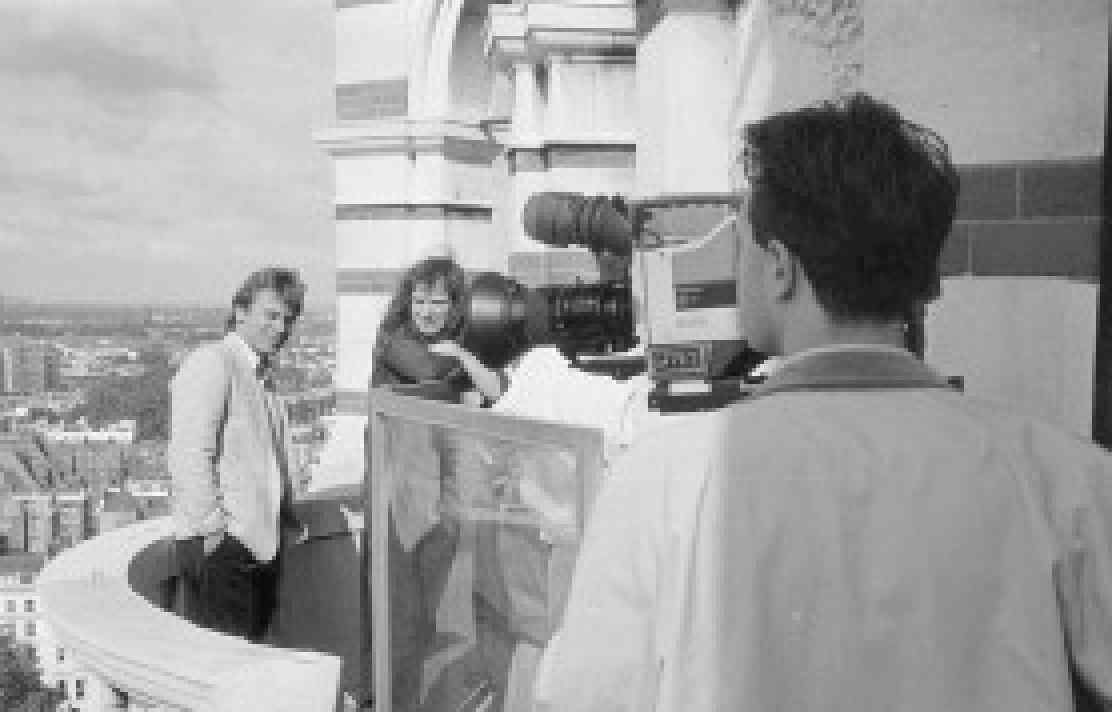 From the video archive