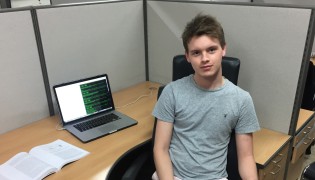 This year, I was lucky enough to be selected to participate in the IROP scheme at Seoul National University.

The workload was quite intense – I would get in to the office at 9am and, sometimes, not leave till 10pm. However, the environment in the office was extremely friendly and, as a result, I was happy to work the long hours. The campus itself was very spacious and the departments were spaced out across the site. There was a huge selection of meals on campus, each usually consisting of rice, a main dish, a variety of side dishes and, of course, kimchi!

I spent the evenings exploring the capital, usually with acquaintances from my lab group and other IROP students. This provided me with an excellent opportunity to experience the culture and taste the traditional cuisine. This ranged from Korean BBQ, fried chicken, bibimbap and donkkaseu to maekju (beer), soju, makgeolli and Noraebang (Karaoke). The Nightlife in Seoul was amazing and it was noticeable how welcoming and inclusive the people were there.

During my time there, I was also lucky enough to learn about various cultural aspects of Korea. For example, there was a strong emphasis on showing respect to your elders, which was particularly apparent in how the students addressed their professors. As well as this, they would always ensure that they poured drinks for each other and would take things with two hands. During my stay, I was also given the exciting opportunity to attend a Korean wedding, which was noticeably different to the British weddings I had been part of. One of the most obvious variations was their enthusiasm for photos of the wedding. This was not on the scale of the short period of time allocated for photos in the UK, but consisted of a full photoshoot in various locations. I also valued the opportunity to see the traditional dress of Korea up close – certainly more exciting than British wedding attire! Overall, this was an extremely enjoyable and valuable experience as it gave me a unique insight into an aspect of their culture I could not have been exposed to otherwise.

After the placement came to an end, I was able to organise my own travels around Southeast Asia, which gave me an opportunity to spend a month travelling around Thailand, Cambodia and Vietnam, which only added to an already amazing summer. It also allowed me to explore a part of the world that I may not have made it to otherwise.

I could not recommend this scheme more highly. Having the opportunity to carry out research alongside people in another country and culture was an extremely valuable and enriching experience that I feel very lucky to have been given. The friendly nature of everyone I met made it an experience I will never forget.