Professor Colin Caro explains why helical stents can change lives – and why, at 92, he still has much to do. 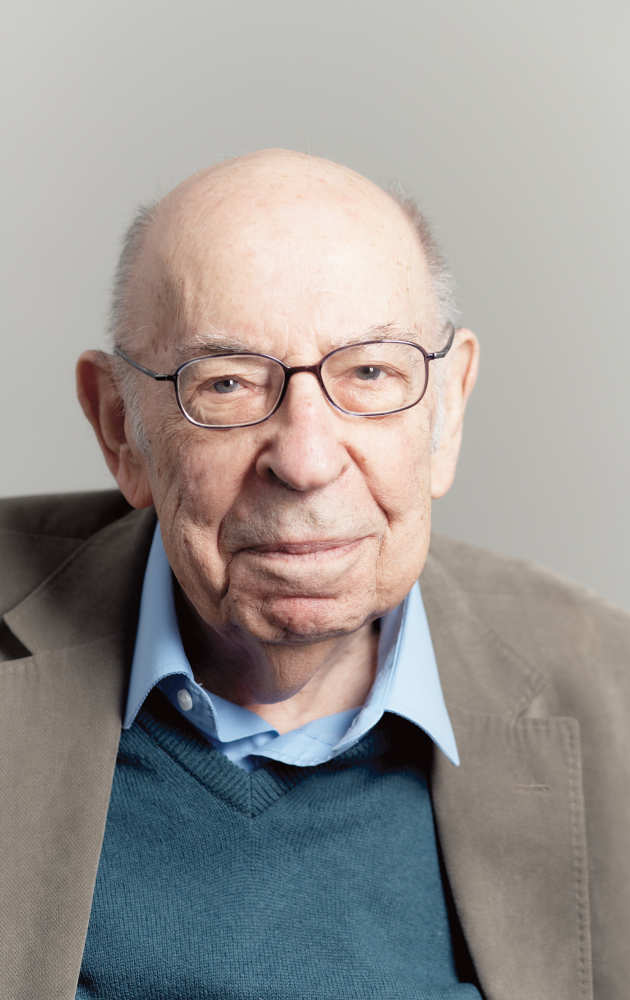 Emeritus Professor Colin Caro keeps the fruits of a very long life’s work in the top drawer of his desk: two feather-light, finger-length tubes. Both are made of thin, wire mesh, zigzagging around to create hundreds of tiny triangles. But there is a vital, and deceptively simple, difference between them: one tube is straight, like a drainpipe; the other is gracefully curved, like a snake.

The tubes are both stents: scaffolds to keep a blocked or narrow artery open, allowing blood to flow through it. The straight one will be familiar to heart surgeons. First used in 1986 in Toulouse, France, by doctors Jacques Puel and Ulrich Sigwart, it is widely employed in modern heart surgery, both in its basic form and with various enhancements, such as a coating of drugs to discourage further blockages.

The curved one, however, could also become a common sight in the operating theatre one day. It is Caro’s own invention, the BioMimics 3D® helical-centreline arterial stent, created as a result of a basic realisation: blood flows in three dimensions, not two. “For 500 years people have known that arteries branch and bend,” he points out. “But what has really been underappreciated is that they don’t do this in a planar fashion: it’s more of a curve, a helix.”

Working on the single challenge of how to stop so many people dying of heart disease, Caro theorised that the helix had something to do with atherosclerosis, the narrowing of the arteries, which was affecting half the world’s population back in the 60s and 70s. This turned the accepted theory on its head. “For a hundred years or more, people believed that the cause of atherosclerosis was blood flowing too quickly through the arteries,” he says. “I showed, using several simple experiments – postmortem studies and modelling – that the opposite is the case. The slower flow is dangerous, and the faster flow actually protects against disease.”

This is due to the three-dimensional nature of blood flow. Atherosclerosis is not a uniform disease, explains Caro: not every inch of the arteries is affected, because the helical flow is not uniform, either. Within the branches and bends of our arteries, there are areas of low wall shear, where the blood flows more slowly, and areas of high wall shear, where it flows quickly. Areas of low shear are more likely to develop atherosclerosis. That is why the BioMimics 3D stent is designed to mimic how the blood flows and, by doing so, harnesses its ability to protect artery walls.

“The helical stent causes the flow to rotate, to swirl, and it causes mixing,” he says. “In a straight stent, blood and the oxygen it carries gets from the middle of the artery to the wall by diffusion – Brownian motion, which is a slow process. In the helical case, the blood in the middle of the artery gets to the walls faster by being stirred, rotated. And that’s what you need.”

Yet this insight, Caro emphasises, did not come in a sudden flash of inspiration. Rather, it was the culmination of many years’ work. And being an outlier at the beginning wasn’t easy. “It’s hard trying to persuade people that a long-held theory is wrong, though it never got unpleasant,” he emphasises. “It can take time to turn the Queen Mary around.”

For a hundred years or more, people believed that the cause of atherosclerosis was blood flowing too quickly – in fact, the opposite is the case"

The results from the first randomised controlled trials in humans have been promising. Use of the BioMimics 3D helical stent resulted in arteries being more open at two years when compared with a straight stent. Ongoing research is being carried out by Veryan Medical Ltd, a company formed in 2003 with initial funding from Imperial Innovations, when the commercial possibilities of Caro’s idea were recognised.

Originally from South Africa, Caro gained degrees in both medicine and physiology at the University of the Witwatersrand, Johannesburg, after volunteering for the South African navy from 1944 to 1946. In the 1950s, he taught medicine in the US and at St Thomas’s Hospital Medical School in London, before founding Imperial’s Physiological Flow Studies Unit in 1966. In 1989, the unit became the Centre for Biological and Medical Systems and then the Department of Bioengineering, of which he was director. Next year the department will be moving to a state-of-the-art new facility, the Michael Uren Biomedical Engineering Research Hub, at the White City Campus.

His many honours and achievements include serving on academic scientific advisory boards in the US, France and Japan; receiving the 2003 Arthur Guyton Award from the International Society of Cardiovascular Medicine and Science, and being named Outstanding Engineer at the 2007 Engineer Technology and Innovation awards. He is author of The Mechanics of the Circulation (1978), and was awarded honorary doctorates from Imperial in 2003, the University of Paris in 2005 and the University of the Witwatersrand in 2010.

“When I was a young doctor, we had engineers in the department who were regarded as technicians; they weren’t quite respected. Nowadays there is full and open recognition that many of the scientists are just as bright, if not brighter, than the doctors,” Caro says.

Despite being ahead of its time, the idea of collaboration between medicine and engineering seemed entirely logical to Caro. “I have always been interested in physics, mathematics, biology and medicine,” he says, “so I was an engineer and a doctor, which was helpful. And I was a doctor in a hospital, and therefore in a better place to recognise disease. But I was working alongside mathematicians from Cambridge and King’s. I took a few extra courses in maths, and it struck me it might be interesting to see what could be done in terms of collaboration. I talked to a few people, and Imperial said they would give me one room – it was at Princes Gate, across Exhibition Road – and we would see how it went, and how long it would be before I failed!” With typical understatement, he adds: “We were lucky. It went well.”

And it continues to go well. He has never retired or left Imperial, he says, because he still finds the work exciting – and important. “It is a serious business, the potential to prolong life. I have always been aware that this could be important. And it’s exciting to see it possibly change things. We are starting to understand the why, and that’s even more important to me.”

And at the age of 92, Caro is still not finished. What concerns him now, he says, is exactly why low shear and slow flow cause atherosclerosis. “You’re never satisfied: you always want to know the mechanism. If you go to a GP, they will say you have high blood pressure and that it is a danger to your arteries. Both those statements are correct. But why? Years later, we are still uncovering what that is all about.” He is currently working on how oxygen is transferred from the bloodstream into the artery wall: if this isn’t done efficiently, the artery will become diseased.

“We have these tiny, fine vessels, called vasa vasorum, which supply the artery walls,” he explains. “But if mixing is inadequate – which it would be in a planar bend – they can get squashed. And they can get squashed when you are stressed, or if you smoke, or if you don’t exercise enough, as these all cause the walls of the artery to constrict and get stiff. The key to progression of disease rests on the tension of the artery wall, and the flow of blood. And it is therefore imperative to keep the flow stable and three-dimensional, and well mixed.”

Caro continues to research and publish, and his office door is still always open to colleagues and students. There aren’t too many places, after all, where you can draw on the experience gained over a 70-yearlong career. His advice to those following behind is simple. “This area is wide open. Encourage younger people. Work as hard as you can. And carry on as long as you can.”