Whether for an audience of one or thousands, performance does interesting things to our brains.

Months spent poring over the score; hours spent in the rehearsal room; days going through the parts with your fellow musicians. And then the moment comes when you walk to the podium and the performance begins – for real. And something happens: to the quality, the energy, the tone.

According to jazz trombonist and physics tutor Samuel Sankey (Physics and Music Performance 2012), performance is “where the magic happens” – or, as Professor Henrik Jeldtoft Jensen, a professor at Imperial’s Centre for Complexity Science, puts it: “Music is communicating the brain’s excitations to the audience.”

“Performance is incredibly exciting. It’s why I play, it’s why I practice. It’s the buzz,” says flautist Lois Ashenden (first year MBBS Medicine and recipient of an Ash Scholarship). “It’s noticing the little things that I love, like the first sound of a violinist’s bow hitting the string. Then the big, lavish moments. The silence of the pause at the end – you keep your instrument up, you can’t put it down, you have to let the resonance hang in the air. There’s a hesitation that no-one wants to break. You think, ‘We did it!’, and then the applause comes.”

During performance those musicians are communicating not only with the audience, but with each other. “I find it hard to stand still,” says Ashenden. “I’ve been told I move too much, that I should channel my energy into the instrument, but playing fills you with so much emotion you have to let it out somehow.”

Dr Tania Lisboa, Imperial Research Fellow in Performance Science, says you can often feel the moment a performance becomes extraordinary. “At times we see chamber groups who have been performing together for decades and the musicians seem to ‘feel’ each other,” she says. “They don’t need to look at anyone, they have the ‘feeling of presence’ and a small gesture is enough for them to know how to react musically. For new groups there is much more verbal communication.”

Jensen has for several years worked together with pianist Professor David Dolan and music psychologist Professor John Sloboda, from the Guildhall School of Music and Drama, to try to get under the skin of performance and understand what happens to musicians and their audience during improvised classical music. Through a number of experiments involving top level musicians from Guildhall, they used electrodes (EEG) attached to the heads of the performers and audience to measure what was going on during performance, with and without improvisation, to better understand the different reactions in our brains.

The musicians were asked to play first in a ‘structured’ or ‘strict’ way, and then to improvise the interpretation, which they call ‘let go’. “We found that the brain activations in musicians and audience were much more similar during ‘let go’ performances, particularly during special moments in the music, which we sometimes refer to as having the ‘tingle factor’,” Jensen says. “During these moments the brain activity of musicians and audience, measured by EEG, was very similar.

“Our analysis suggests that during ‘let go’ there is a decrease in inhibition and self-awareness of the audience, and a decrease in the flow of information between the musicians.” This is interesting, because it suggests the musicians are communicating less, or perhaps less consciously, during improvisation.

For complexity scientists, there are implications to studying how, for example, electrode number eight on the flautist relates to electrode number five on the harp, says Jensen. “We call this causal time series analysis. How different time series relate to each other helps us make sense of big data. For instance, how computer algorithms in finance influence each other.”

Sankey describes improvisation as “requiring computational power of the brain”. Jazz improvisation is something you do through hearing, he says, “but you have to work things out in your head. It’s instantaneous composition. There are rules – it’s easier if you know what the chord patterns are – but you have to keep them flowing through your brain.”

It’s all about connections, then, but not just the scientific ones. “The skill of performance is communication with the audience,” says Imperial’s Director of Music, conductor Richard Dickins (who will be retiring this year after 40 years of working with the UK’s finest musicians). “It would be possible to play the piano sitting motionless with no facial expression and your hands just whizzing around the keys, but that would be very dispiriting for the audience.

“It’s the same skill as a presenter, or an entrepreneur explaining their idea to stakeholders. If you’ve seen a good communicator, you will know. Actors are master communicators, so are chief executives. It is something we teach; we say performance is about what you see as well as what you hear: ‘Why is a live performance so much more vivid than a recording?’ But it’s also something you learn by seeing, recognising and watching people who do it better than you. We say, with music, as with acting, the audience can see into your very soul through your eyes. You can’t hide, so you might as well enjoy the feeling of letting go.”

As we all know, performance is a nerve-racking business. “You have to love it,” continues Dickins. “The lovely thing about being a conductor is you have your back to the audience, although someone once said to me, ‘You have the most expressive back I’ve ever seen!’ But as conductor I’m fully engaged with the musicians in front of me.”

Professor of Surgical Education and Engagement Science, Roger Kneebone, believes science and performance are intricately linked, but in reverse: it’s not the science of performance he’s interested in, but the “performance of science”. He believes that by noticing the ways that surgery, for example, is like performance, we can improve the way we do it. “Cutting out someone’s stomach cancer, for example,” he says, “what is the difference between a good and bad operation? It’s to do with performance. People don’t always do it well.”

Kneebone is interested in ‘embodied knowledge’: the way your body learns to do things and how this can contribute to expert performance, in its broadest sense. He has set up ‘serendipitous encounters’ between craftspeople, musicians, artists and surgical teams.

“You could look at an operation as a group of people working together, doing dextrous things with their fingers,” he says. As a result, lacemaker Fleur Oakes came to watch operations in the vascular surgery unit at Imperial’s St Mary’s Hospital, and is now developing a training programme for surgeons.

“The arteries of elderly patients with chronic diseases don’t hold stitches well,” explains Kneebone. “They break up. Lacemakers are used to handling fragile, delicate textiles, and develop deep sensitivity in their fingers. You can train surgeons to feel with their fingers when they can’t see something. Repetitive knots, stopping threads snagging – these are also useful things for surgeons to learn. At first the medics found it a bit odd, but now they think it’s useful.”

He has brought together stone carvers and orthopaedic surgeons. “Stone carvers use chisels on hard materials, they listen to the sound the stone makes as the chisel strikes it,” he says. “Orthopaedic surgeons making chisel-cuts in wrist bones do something similar. Stone carvers have a long apprenticeship where they start by learning to manipulate their tools; surgeons learn by taking part in operations. Other performers, like puppeteers, warm up their fingers for 20 minutes before they perform, but surgeons don’t. Why not? Musical quartets communicate without looking at each other, as a surgical team must do because they’re looking at the patient. And each must think beyond their own part, to the bigger picture. Learning how physical dexterity relates to neurodiversity, and particular ways of learning, can allow us to perform better.”

Science and performance are closely related, then, and in ways we might not expect. But, as a conductor, what does Dickins think about the idea that music performance is ‘communicating the brain’s excitations to the audience’? “Music is not science,” says Dickins. “It’s about passion, it’s about love. Of course these are driven by neural impulses, but in music it’s the heart that is communicating." 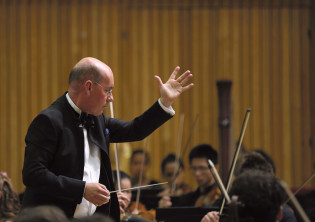 Richard Dickins will retire this year as Imperial’s Director of Music. Much admired for his sympathetic rapport with concerto soloists, Richard has been fortunate to work with some of the UK’s finest musicians, and is also well known for his work with young musicians.

He became conductor of the Symphony Orchestra at Imperial while still a student and was later appointed the College’s first Director of Music. A graduate of the Royal College of Music (RCM), he was, until recently, principal conductor at the RCM Junior Department. He has also been artistic director of the Minehead and Exmoor Festival for more than two decades.