According to The Hitchhiker’s Guide to the Galaxy, 42 is the answer. But what is the question? 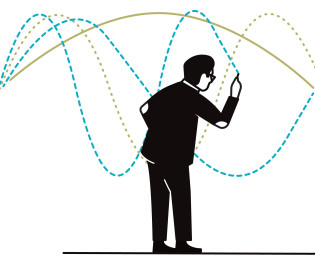 Martin Hairer, Professor of Pure Mathematics and Chair in Probability and Stochastic Analysis, says his big question centres on explaining what happens when properties behave randomly, such as when liquid is stirred or a sheet of paper burns unevenly. This could potentially have applied technological uses: in machine learning, for example, where a neural network’s reasoning is not always evident, even when it produces the correct result. But that’s not something he dwells on. “As a pure mathematician, I’m aiming to better understand the world,” he says. “It’s not about using that knowledge to build a gizmo or set up a company, it’s more of an intellectual challenge."

In 2014, Professor Hairer was awarded the Fields Medal, the highest honour in mathematics, for his work on stochastic partial differential equations (SPDEs), which are often used in physics to describe the random outcomes that result from random inputs. Hairer says that while they may seem to account for the way a system behaves, they don’t always stand up to mathematical scrutiny.

“When you look at these equations more closely, you realise the solutions are too irregular for the equation itself to actually have any meaning,” says Hairer. “I’ve been working on a general theory that allows us to give intrinsic meaning to these equations.”

His next task will be to not only ensure this theory works mathematically, but to test it against increasingly accurate representations of real-world situations. However, he points out that progress often doesn’t happen overnight – one famous mathematical theorem was first discussed in the 1780s but not fully understood for another 150 years. So a fuller understanding of why random distributions of random variants behave as they do is still some way off. Even then, there will be more work to do. “This is relatively open-ended,” Hairer says. “You never really end up with a theory of everything.”