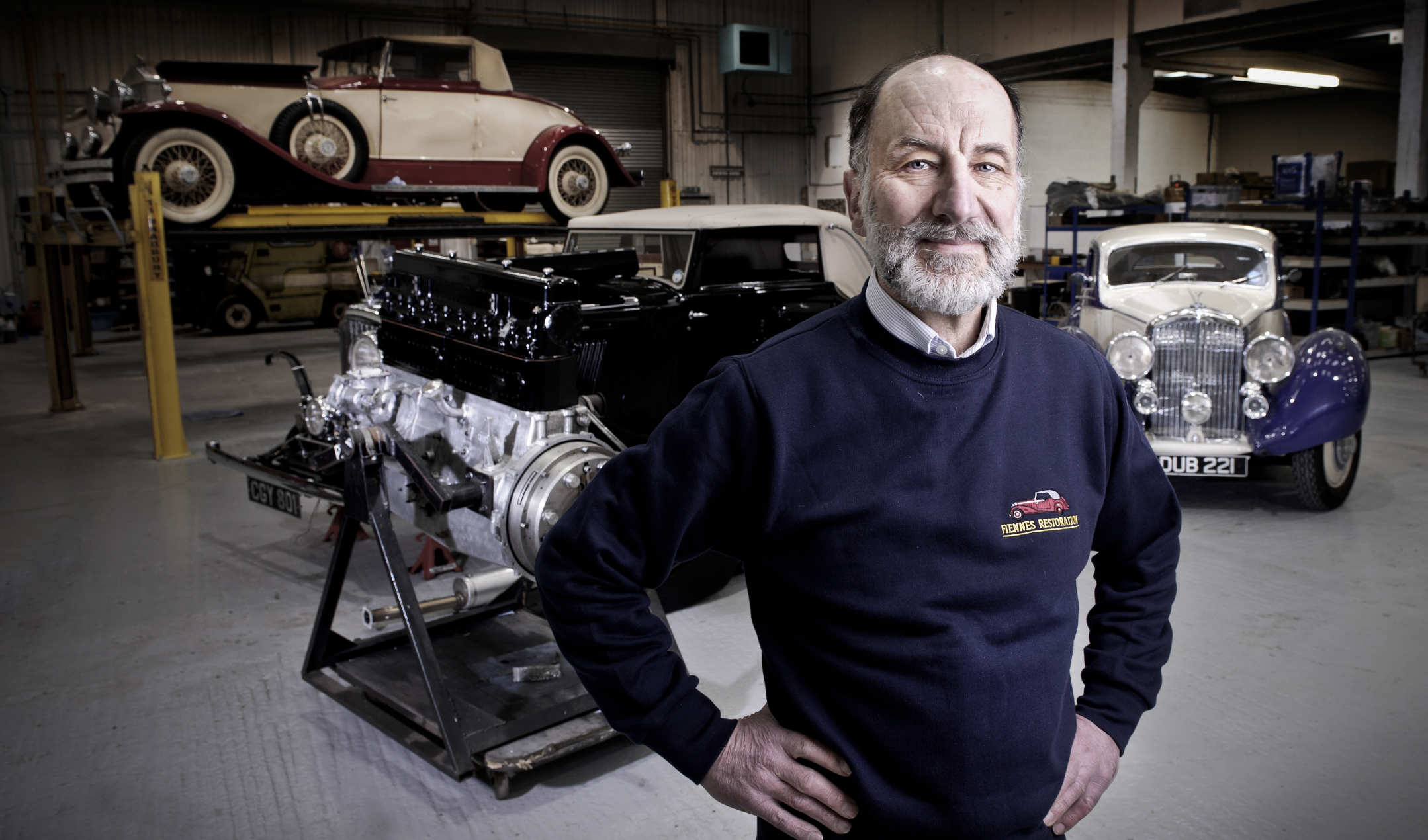 Will Fiennes, restorator of pre-WW11 Bentleys and Rolls-Royces 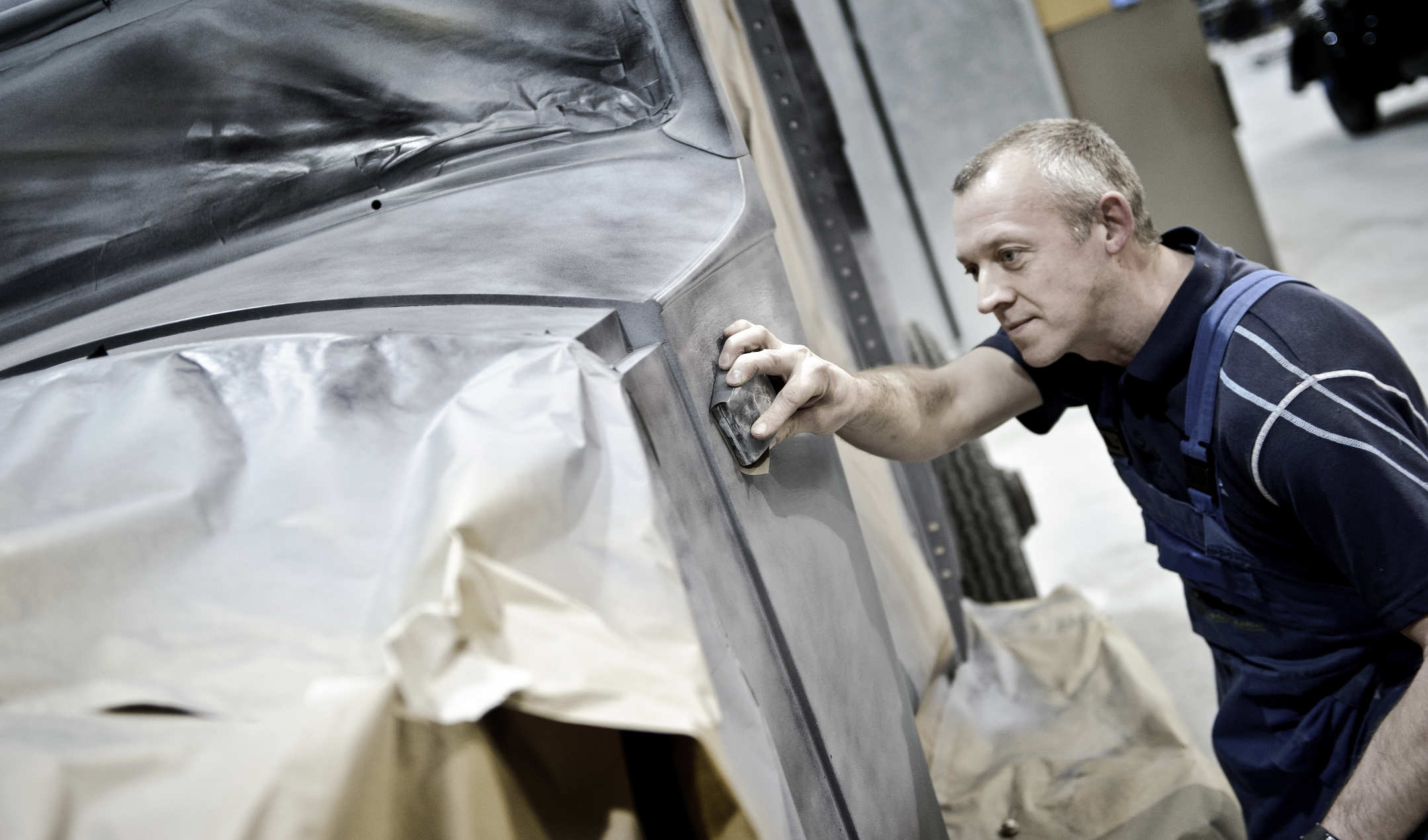 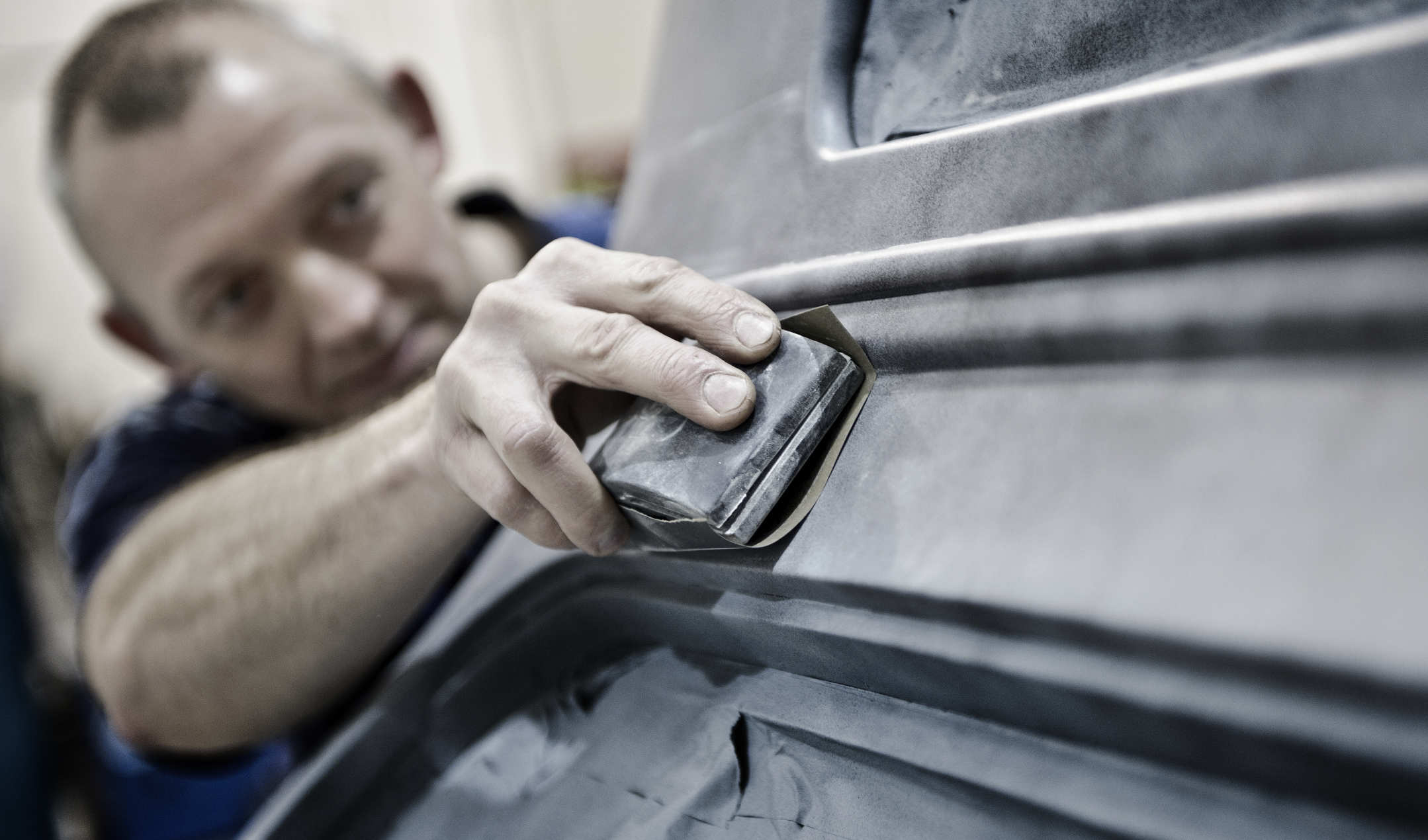 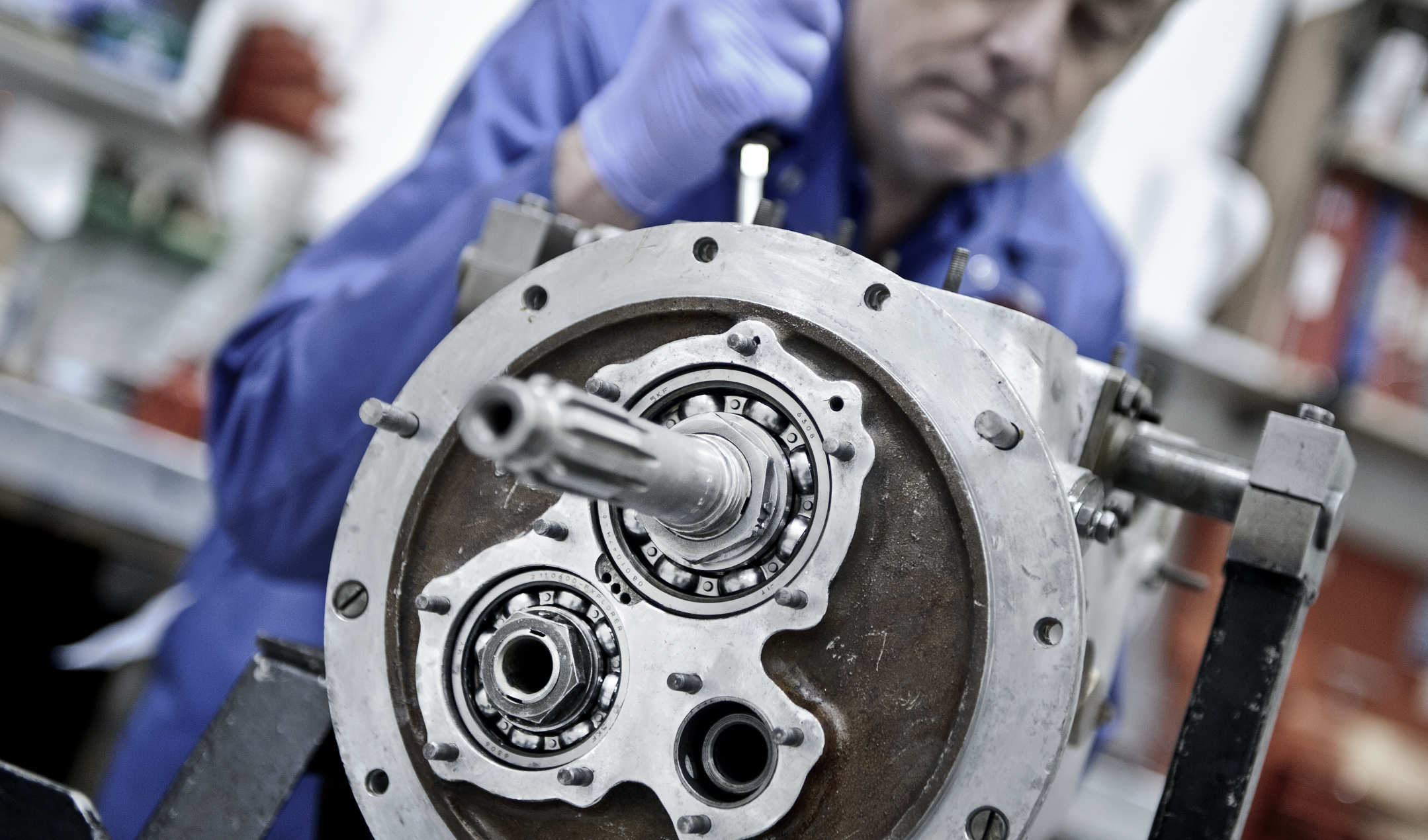 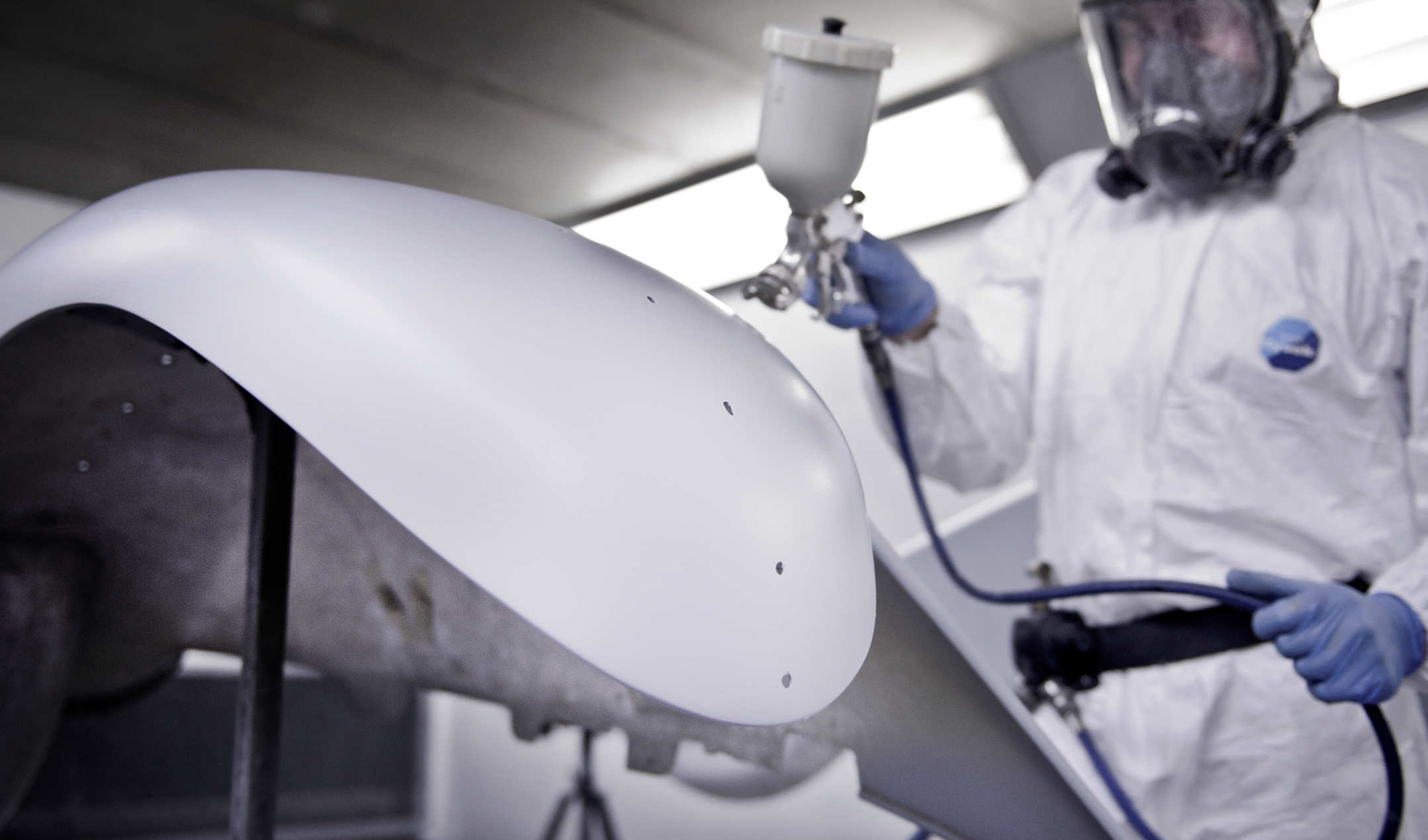 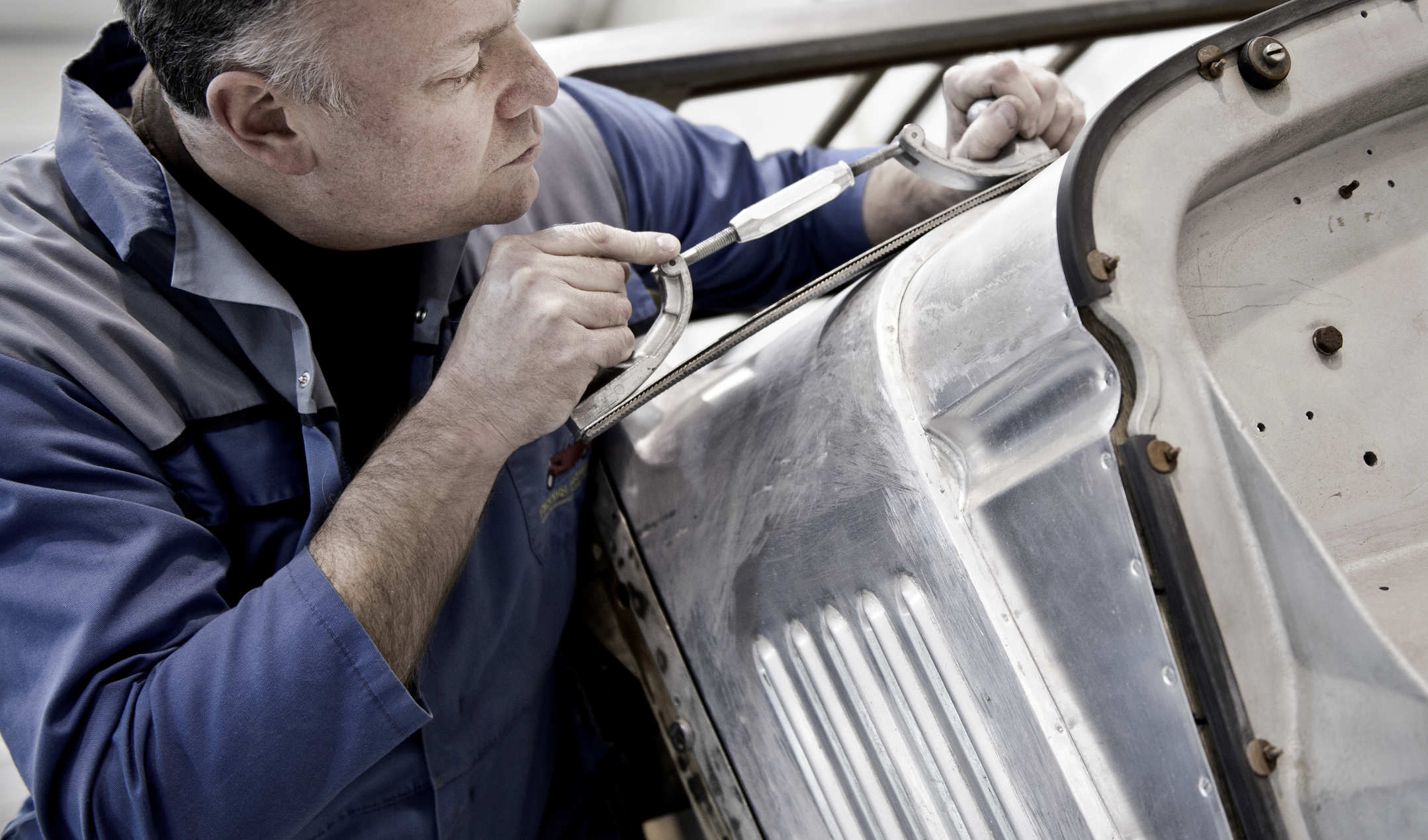 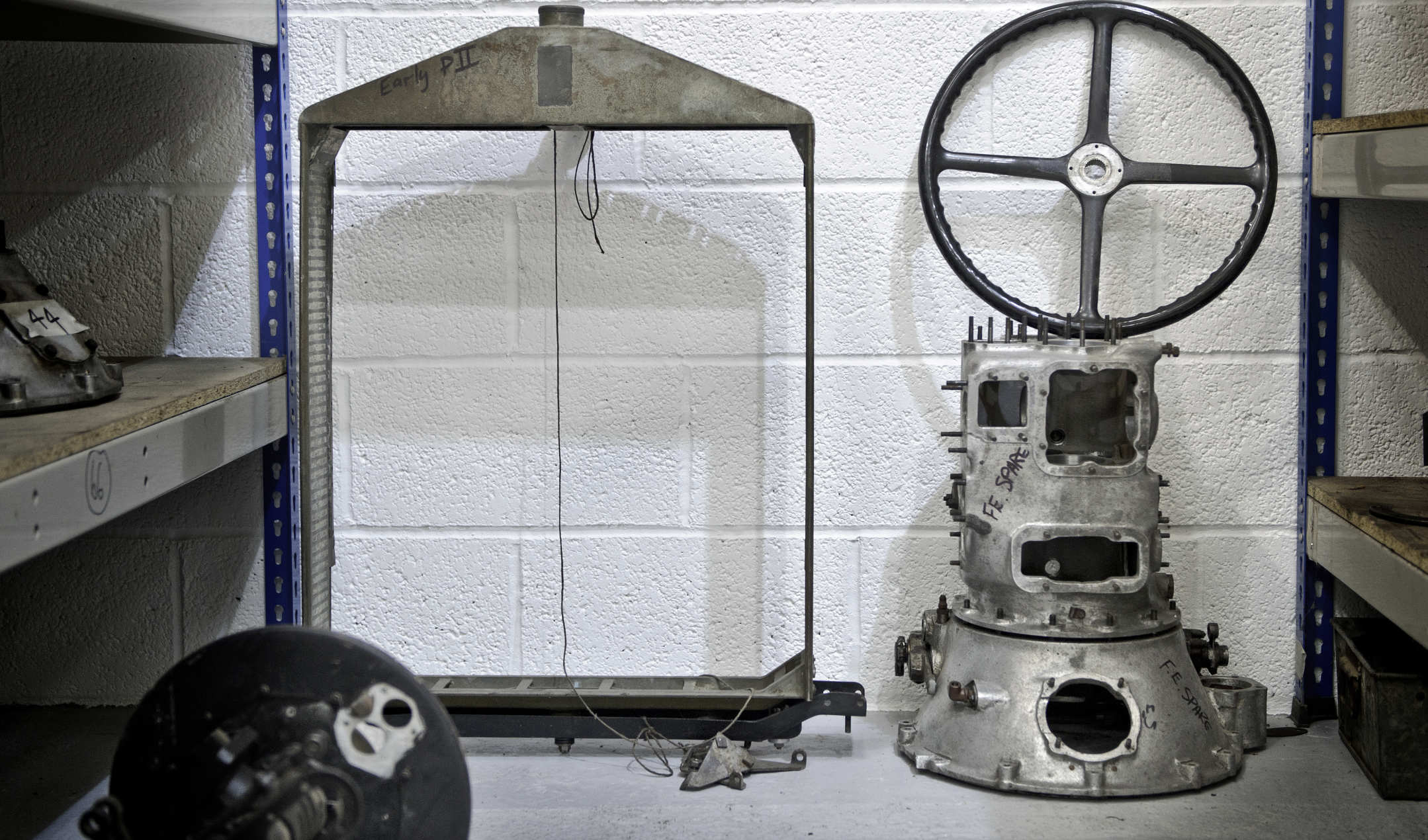 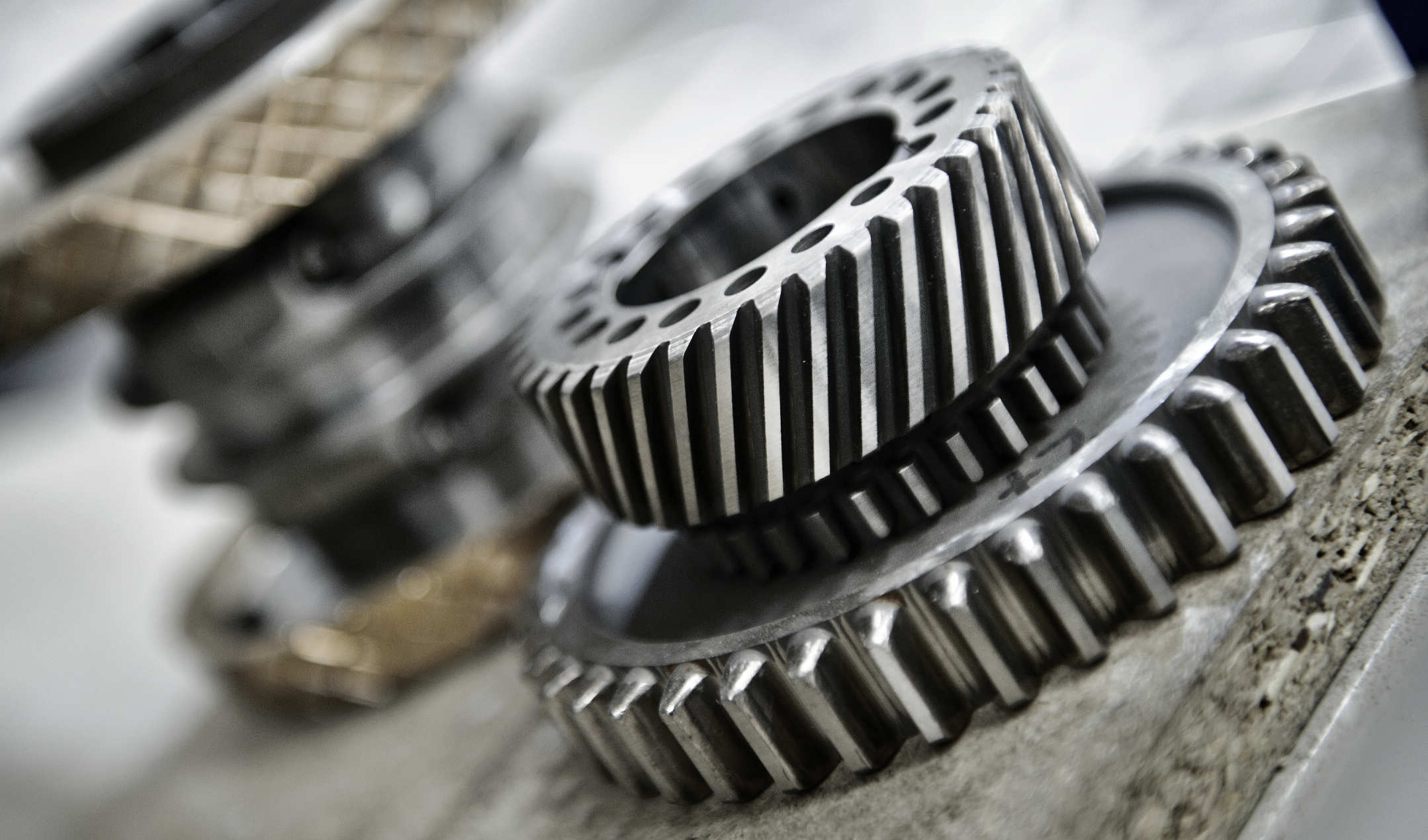 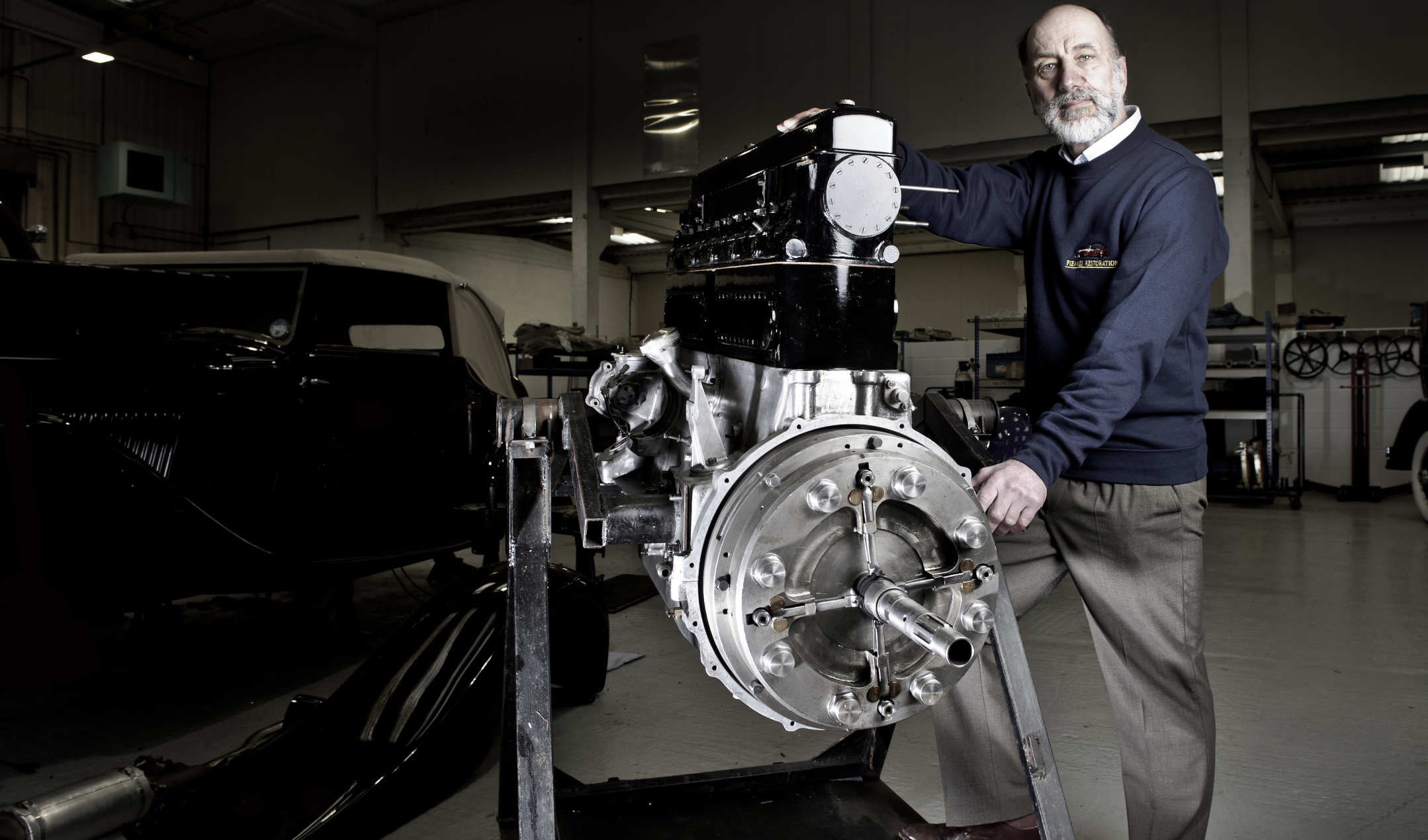 Will Fiennes, restorator of pre-WW11 Bentleys and Rolls-Royces

The vintage Rolls-Royce: a tale of coincidences 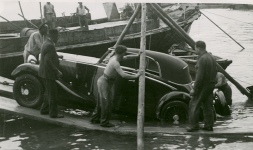 ‘My late husband lavished attention and love on that car, but it was impractical with three children, so he sold it on in 1960. The car had previously belonged to a prince.’

It was 1985, and Felcie Evill was reminiscing about the Rolls-Royce her husband, Royal Engineer Brigadier Tom Evill DSO CBE, had bought in Austria in 1948 and brought back to England. In 1960 Brigadier Tom Evill had sold it to Colonel David "Jack" Balmain, who had lost a leg in India trying to save a small boy from a tiger: the Rolls-Royce was spacious enough for an Inspector of Cadet Forces in Scotland and his wooden leg.

Perhaps it was her tone of voice, as well as the car’s absence (its whereabouts unknown), or that mention of a mysterious prince, but the fact remains that Felcie’s son-in-law Richard Raynsford became determined to find the 1932 Rolls-Royce 20/25 which had been owned by his wife’s family.

‘All I had, at the beginning, was an old photograph of GRW59, the Rolls-Royce drop-head coupé which had been so loved by the father-in-law I never met,’ remembers Richard Raynsford.

Raynsford started putting together the history of the car but the weave of time could not be untangled until 1996, when he placed that old photo in the Rolls-Royce Bulletin. By extraordinary coincidence, a Lee Noble of Seattle put a photo of the same car, from the same angle, in the next issue of the same Bulletin; having bought the dilapidated Rolls-Royce as a present to himself, Lee Noble was asking for information about it.

Whilst the decades spent in America are an obscure time in the car’s life, apart from the knowledge of a fire which almost destroyed it, Richard Raynsford’s relentless efforts to piece the car’s lifetime fragments together has yielded exceptional results, and the coincidences do not stop at its discovery, forlorn and neglected, in Seattle.

‘It was a highly emotional moment, being reunited with this mythical car after a ten-year search,’ admits Raynsford. He flew over to Seattle in January 1997 to buy back a car which had seen better times. ‘It was sitting in pieces in a garage, snow thick on the ground. Together with the seller, we packed up the car and its ancillaries.’ Two months later, it arrived in the UK, and other coincidences followed.

‘The more I discovered about the car, the more determined I was to take it back to its former glory,’ said Raynsford about his endless quest. ‘It was one of those rare machines which seem to live a life of their own.’

It certainly had a birthday and a name on its birth certificate: GRW59, born in Derby on 10 November 1932: as a 20/25 chassis (at the time, cars were built as a running chassis, to be ‘clothed’ with a separate body later), it was shipped to Geneva, where it was bodied by Georges Gangloff as a ‘saloon’. Gangloff built the coachwork for only seven pre-WWII Rolls-Royces. The first owner was architect and entrepreneur Joseph Rubin.

Yet, when the car had come into Tom Evill’s ownership, in 1948, it was a drop-head coupé. The plot thickened for Richard Raynsford, who was spurred by the car’s patchy history and his own only half-fulfilled dream.

‘I contacted the oldest specialised pre-war Rolls-Royce and Bentley restorer, Will Fiennes,’ he says. ‘He came to see the car, which was partially dismantled, although on four wheels. I was aware of the Rolls-Royce’s stay in the States over the previous thirty-five years, and clearly I knew about my wife’s family ownership in the Fifties, but there were large gaps to fill.’

It is only by understanding a car’s history that any proper restoration can take place. And it takes a fair amount of dogged determination to achieve the former and carry out the latter, on a car whose past eludes everyone.

Will Fiennes was equally puzzled by a Rolls-Royce whose records showed it as a saloon by Gangloff in Switzerland, but which now sported a different body. A number of parts were also missing.

Another amazing coincidence solved the mystery: ‘we already had the Rolls-Royce in our workshop when I visited a Bugatti restorer near Aylesbury, who was holding an 'Open House' under the auspices of the Institute of the Motor Industry (IMI), with some of my workforce. While there we saw, and photographed, a very attractive Bugatti with a body by Graber. The next day Tim, who works in our coachbuilding section, looked at parts of the Rolls-Royce and commented how similar they were to the Graber Bugatti. He then went back, examined the Bugatti very carefully and took photographs. Further analysis confirmed that the Rolls-Royce was fitted with a body by Graber,’ explains Will Fiennes.

Further probing revealed that in 1937, GRW59 had indeed been rebuilt as a drop-head coupé by a young coachbuilder, Herman Graber of Wittrach, near Berne. He was a rising star and evidence of his involvement and craftsmanship has been proved beyond doubt.  Sadly Joseph Rubin did not live to see the completion of his new commission.

Still, two bodies by two renowned coachbuilders were not the only surprise GRW59 threw at the men who were investigating its past: another illustrious owner stepped up, HRH Field Marshal, Sardar Shah Ali Wali Khan Ghazi, Victor of Kabul (1888-1977) and brother to King
Shah Nader Khan of Afghanistan (assassinated in 1933). Shah Wali Khan served as Plenipotentiary Extraordinary to the Court of St James London, Paris, Berne, Warsaw and Rome from 1929 to 1945, then went back to become Prime Minister of Afghanistan.

Whilst in his possession, the Rolls-Royce led as colourful a life as that of its owner: only four years ago Richard Raynsford came across a unique Keystone Agency photograph of GRW59 being winched out of Lake Geneva on 17 July 1939. The caption spoke of the car’s driver, the ex-king of Afghanistan’s brother, taking an unwelcome bath when he missed a bend at St Gingolph and dropped 20 metres (60 ft) into the lake. Again, finding the newspaper cutting was, if not a coincidence, remarkable chance, as the Swiss enthusiast who found it knew about the car and its by-then owner Richard Raynsford, so made the unlikely connection.

Shah Wali Khan enjoyed a privileged status in Mussolini-dominated Italy during WWII. So warm was the relationship between Italy and Afghanistan (the first country to recognise Mussolini’s regime), that the Afghan prince could drive around Rome unchallenged in a car whose fuel consumption would have been prohibited even to the indigenous Alfa Romeos of the time.

After Shah Wali Khan, the Rolls-Royce became the car of choice for newly married Reverend George Irving, Theatre Director of Britis h Troops Welfare, who took the drop-head coupé (and his wife) around the Lakes in Northern Italy. The last owner before Richard Raynsford’s father-in-law was Major Jack Comyn MBE, who bought the car for £550 in 1947.

Once back in England, the car absorbed the attention of both the family who once owned it and the restorer tasked with the mission to give it back to them in as original a condition as possible.

‘The fire had damaged the Rolls-Royce, but earlier attempts to repair it had damaged it even further,’ recalls Will Fiennes. ‘The hood mechanism, which is very complicated, was significantly distorted. This was not obvious to start with, as it had been extensively repaired in the US, but the repairs masked the problems. The hood had to be dismantled and realigned usi ng laser tools then ca refully reassembled.’

The next dilemma was o ne of choice: renewal or restoration? In the end, it was a combination of both: some parts had to be remade, as restoration would have compromised the rest of the work.

Original interior detail, like trim and seats, had not survived the fire. Will Fiennes had to analyse other examples of Graber's period work to manufacture something as close to authentic as possible.

Wherever possible, the restoration route was preferred: ‘the windscreen frame is made out of polished aluminium rather than chrome plated brass, as are the cappings that are fitted to the doors’ top edges.  It is a feature of that particular model and one we were keen to protect: they had not been destroyed in the fire but – as they are quite delicate – being able to restore them was a real achievement.’

After a twelve-year restoration programme and the effort of an entire team, as well as the unwavering support of Raynsford and his family, the Rolls-Royce 20/25 drop-head coupé is ready to woo again: a string of high-class and internationally renowned events, from Villa d’Este and its Concorso d’Eleganza to Pebble Beach, await the car which wanted to be found by the right people.

One last coincidence is the fact that, despite the continuous dialogue between Richard Raynsford and Will Fiennes over the last twelve years, they found out only two years ago that they had been to school together: a school photograph showed both men as nine-year-olds, standing side-by-side. It really was meant to be.