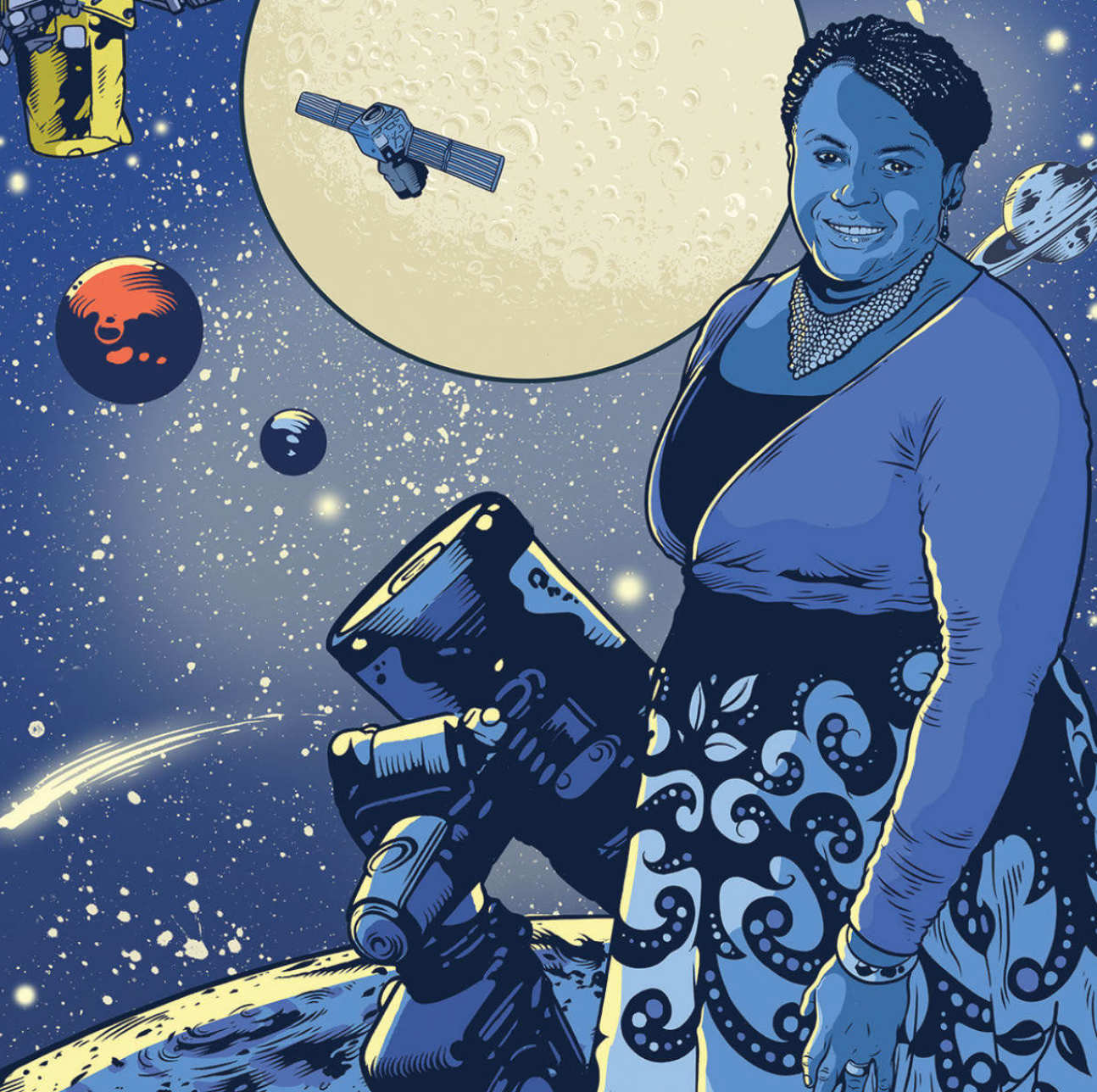 Dr Maggie Aderin-Pocock (Physics 1990, PhD Mechanical Engineering 1994) is a space scientist, science communicator and presenter of the BBC’s The Sky at Night. She is Managing Director of Science Innovation Ltd, through which she organises public engagement activities which show school children and adults the wonders of space.

IMPERIAL: When did your interest in space begin?

ADERIN-POCOCK: Ever since watching The Clangers as a child, I’ve always had a strong desire to go into space; it has been the driving force in my life. I recently helped relaunch The Clangers for the BBC and I got to do some filming with them. At one point they looked up at me and said “Hello Maggie!” in their little whistles and I cried because the three-year- old girl inside of me was so excited to be finally meeting them!

IMPERIAL: What motivates you as a space scientist?

ADERIN-POCOCK: What is so compelling is just how little we know; our understanding of the universe just keeps on evolving. First we thought the Earth was the centre of the universe and then we thought it was the Sun. Now we know we live in a galaxy of 200 billion stars, and that there are billions of galaxies out there. It’s all mind expanding stuff.

IMPERIAL: You’ve previously said you’d like to retire to Mars. How would you spend your days?

ADERIN-POCOCK: I can’t see myself sitting quietly. I’d have to be running around investigating things. I’d try and find out what happened to Mars – it used to have a thick atmosphere and lots of running water. People think it might have had a magnetic pole but the core solidified. I’d look for the evidence of what happened, for traces of life and magnetic pointers in the rock. I would like to take my husband and five-year-old daughter with me, so I will definitely have to wait till she is grown up.

IMPERIAL: How can the study of space help us on Earth?

ADERIN-POCOCK: Many of the detectors up in space are looking out at the stars, but there are thousands of satellites pointing directly at Earth and they have so many uses. I’ve worked on satellites for the European Space Agency to measure the photosynthesis of huge masses of plants. Satellites can also measure the composition of soil and see if it is deficient in particular minerals, coordinate relief during natural disasters and monitor the movement of troops during war to prevent war crimes. There are endless possibilities.

IMPERIAL: What are your memories of Imperial?

ADERIN-POCOCK: Imperial seemed like a magical place to me. When I was child, I used to go to the Science Museum with my sister. Walking past Imperial, I used to think, “That’s where the clever people and scientists go!” So to get admitted for my undergraduate degree was a dream come true in itself. The people I met were so inspiring. Tom Kibble used to take my first-year laboratory. He was so down to earth. To find out later that he had co-discovered the Higgs boson was crazy because he just seemed so human! The lecturers made everything seem so accessible.

IMPERIAL: What advice would you give to a young person graduating today?

ADERIN-POCOCK: When I was graduating, I thought careers were very linear. You went into a job, stayed 30 years and got your carriage clock at the end. But my path has taken me in many different directions and I have found that the tools I’ve picked up along the way are incredibly useful. Now I don’t think any direction is particularly wrong as long as you keep your end goal in mind.

IMPERIAL: Tell us about a current project

ADERIN-POCOCK: I’m involved in a new animation for kids. It’s great as it explores cosmology for four to seven year olds. As a science communicator, I truly believe that with analogies you can find ways of explaining virtually anything to anyone. That’s my challenge and it is a fun one.

IMPERIAL: Who is your personal hero?

ADERIN-POCOCK: Yuri Gagarin. He was born on the 9th of March, so we share a birthday. He was just a kid from the countryside who was sent up into space. When he was going up, they’d only sent a few animals before, so he really didn’t what was going to happen – he could have blown up on the launch pad. He’s always been my hero and one day I’d like to follow him into space.