Imperial’s new White City Campus is rising fast and is set to alter not only the landscape of west London, but also the shape of interdisciplinary research and innovation. Lucy Tobin finds out more about the site’s heritage and its promising future. 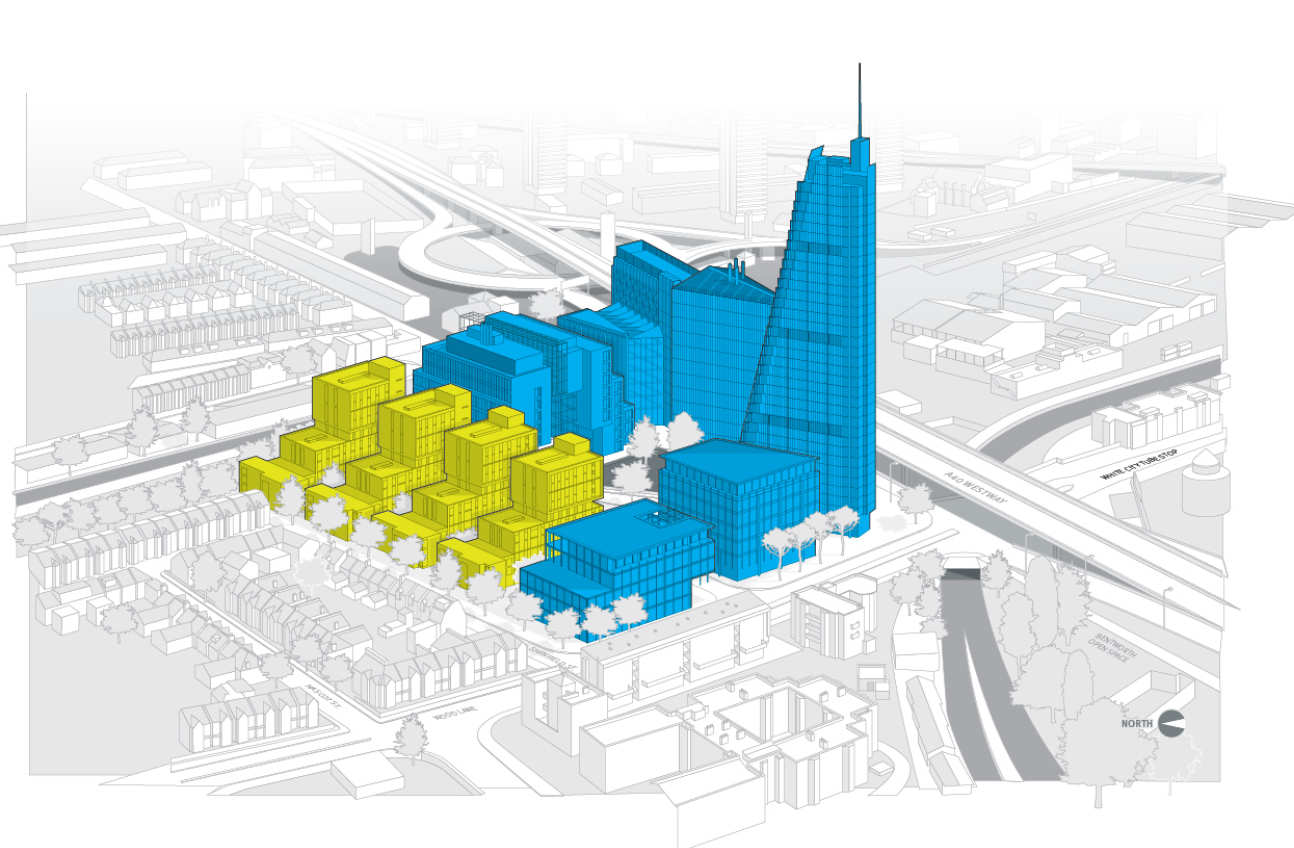 If you stood at the bar during one of the drinks receptions held by London’s big corporates this autumn, you may have heard suits animatedly discussing ‘agglomeration economies’.

It’s this theory that has made major firms desperate to build their offices near art colleges packed with creatives in King’s Cross, as well as being the reason why City money men are moving to Shoreditch to hang out with tech entrepreneurs.

Agglomeration economies refer to the benefits that come when entrepreneurs, companies and financiers cluster together in cities or industrial business parks. It’s the open-plan office on a larger scale: the idea being that populating a new development with a wide range of diverse and interesting companies and individuals will lead to more success for all of them.

And it’s a concept that it could be said is at the very heart of Imperial’s £3 billion, 25-acre White City Campus.

The College’s aim for its new development is to give academics and students a place to collaborate with the entre­preneurs, investors, tech-experts and creatives who are driving London’s international eminence. At the same time, it will give Imperial researchers who haven’t previously been able to work together the space to collectively tackle major interdisciplinary experiments that could change lives.

Whilst furthering science and technology research to improve lives is at the core of the project, there’s also a strong element of commercialisation. The White City site – which is three miles from Imperial’s South Kensington home and adja­cent to its Hammersmith Campus – is divided into two zones. The north campus, where construction is well underway and where 600 postgraduates have already moved into sleek new studio apartments, is just a few minutes’ walk from Hammer­smith Hospital, Imperial’s focal point for translational medicine. It’s also close to another major Imperial research hub, St Mary’s, as well as the Francis Crick Insti­tute, further to the east.

Focused on health and wellbeing, the north part of the campus will house the site’s flagship building – the 24,000m2 Translation & Innovation Hub, where scientists and researchers are going to be sharing space with tech giants and fledgling start-ups. The building – part funded by a £35 million government grant – will provide facilities for 1,000 scientists and engineers, and will house more than 50 start-ups and innovation hubs for several large technology companies. Some 140 spin-out companies have been founded or funded by Imperial Innovations (a commercialisation company founded by Imperial) over the past decade; the new campus is set to bring ideas to market on an even greater scale. “The Innovation Hub will see us bring in companies, incubate bril­liant new spin-outs, and help us to focus on the health and wellbeing parts of our strategy,” says Profes­sor David Gann CBE, Imperial’s Vice President (Development and Innovation). He hopes the campus will help London compete with the American powerhouses of Silicon Valley for digital technology and Boston for bio-medical research and innova­tion, pointing out that White City Campus is a key part of the London-Oxford-Cambridge ‘golden triangle’ which, says Gann, has “more science and tech workers and faster industry growth than Silicon Valley.”

Indeed, over a third of the space at White City Campus will be devoted to diversifying Impe­rial’s income. That commercial nous was reflected in the project’s inception: it began just as Britain fell into recession. Whilst the College knew it needed to expand to fulfil its research potential, falling land values helped Imperial to initially buy a 7-acre brownfield site from the BBC in 2009 and break ground on the first building in its new site a year later. The purchase of another 17 acres of adjacent land from insurer Aviva took place in 2013.

The scale and ambition of Imperial’s White City plans were hard to imagine a decade or so ago. That was before Australian mall giant Westfield completed its huge first London shopping centre, down the road. The mostly commercial area consisted of warehouses, struggling workshops, and train tracks; its major attraction then was the A40 Westway.

But the area boasts a prestigious pedigree: more than a century before Usain Bolt and company descended on Stratford for the London 2012 Olym­pics, the area that is now being transformed hosted the 1908 Summer Olympics. One year after that, it held the Imperial International Exhibition, carry­ing on the tradition of the Great Exhibition of 1851 which was held in South Kensington and led to the university’s creation.

Today, planning works for Imperial’s White City Campus continue apace. Next door to the Translation & Innovation Hub will be the 26,000m2 Molecular Science Research Hub, with the new Department of Chemistry research facilities at its core, bringing together synthetic biology, data sciences, technol­ogy and health research, and due for completion in 2017. Two years later, the Michael Uren Biomedical Engineering Research Hub (see overleaf), a cutting-edge 19,000m2 building, will open its doors and draw together scientists, engineers, and medical professionals to pursue life-changing research into new medical technology.

Nearby will be a residential tower block, with some apart­ments earmarked for Imperial key workers at below-market rents, whilst the last major building on the north part of the campus will be Imperial’s School of Public Health. This will give the department which last year helped the College be recognised for having the greatest concentration of high-impact research of any major UK university (accord­ing to the Research Excellence Framework) a more spacious, purpose-designed building, to accommodate work on improv­ing the health of the population. 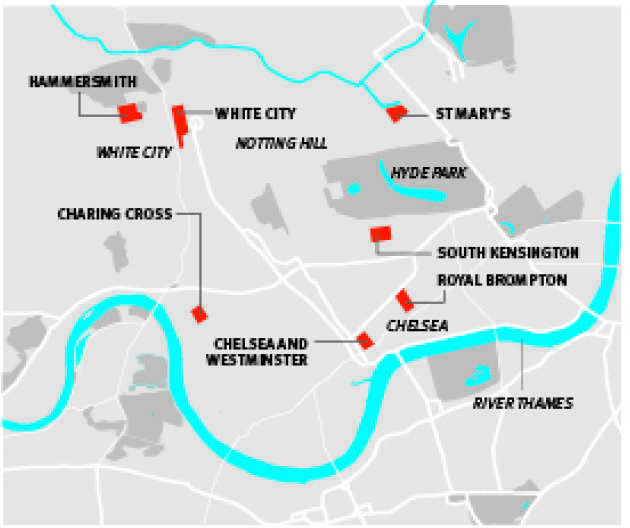 Little wonder Imperial’s President Professor Alice P. Gast sees the White City develop­ment as playing “a central role in cementing Imperial’s position as one of the world’s top universi­ties.” She adds that the campus “offers the opportunity to fulfil our ambitions. Our ambition to do things differently: develop new partnerships, diversify revenue streams and provide students with entrepreneurial experiences. Our ambition to start new areas of research.”

More of that ambition will eventually be fulfilled across the A40, on the south site of Imperial’s contiguous campus. Still in the planning stages, the addition will vastly increase the College’s capacity for deliver­ing its strategy on translation activities. As the land awaits its transformation, Imperial has already converted old buildings for new uses. DNA Electronics, Professor Christofer Touma­zou’s spin-out company which is known for technology like its ‘lab on a chip’ that allows DNA data to be analysed within minutes and outside of tradi­tional laboratories, has already moved in. So too has Autolus, an auto-immune company run by researchers from UCL.

Lucy Tobin is an Evening Standard journalist and author of six books, including her latest The Book of Jobs (Heron Books, £9.99). She tweets @lucytobin.

Discover more about White City Campus, including the story so far and the latest developments at the site.