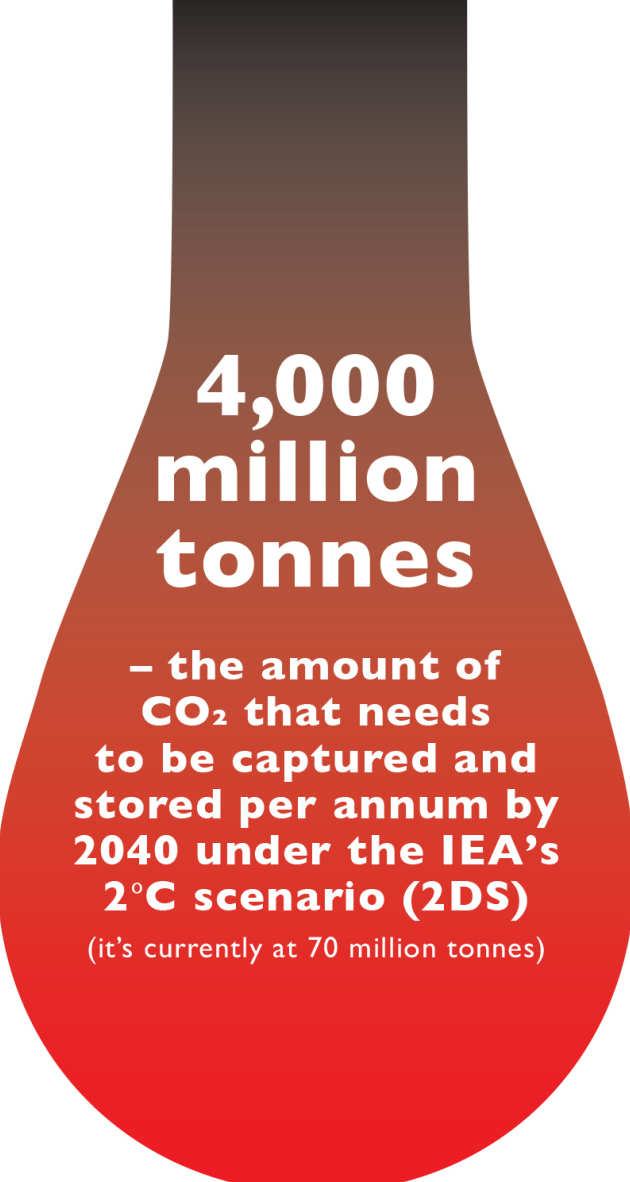 Professor Geoffrey Maitland is a realist. “If we are going to meet the rising energy demands of the developing world, we must accept the continued use of fossil fuels, in this century at least. The real question is, how can we do so without creating catastrophic climate change?”

This is a pressing question. Climate experts predict that the global demand for energy will double by 2050. Global emissions of carbon dioxide currently stand at a staggering 36 gigatons a year. Following the Paris climate conference of December 2015, ambitious targets have been set on a nation-bynation level to reduce greenhouse gas emissions, with EU members, for example, agreeing jointly to aim at reducing emissions to 20 per cent below the 1990 level by 2020.

The ways this can be done include increased energy efficiency and greater use of renewable energy. But as Maitland, Professor of Energy Engineering and founder of the Qatar Carbonates and Carbon Storage Research Centre, points out, at least 20 per cent of the reduction in CO₂ emissions by 2050 demanded by the Paris agreement will need to come from climate mitigation technology for fossil fuels. This includes techniques such as carbon capture and storage (CCS), that can capture and store safely up to 90 per cent of the carbon dioxide CO₂ emissions produced from the use of fossil fuels in electricity generation and industrial processes, preventing the carbon dioxide from entering the atmosphere.

At present, there are 20 large-scale CCS projects in existence across the world, with another 15 in the pipeline. This is, quite simply, not enough, says Maitland. “Typically, each CCS plant will capture between two and three megatons of CO₂ per annum. Which means we would need something like 3,000 CCS projects to meet the 2050 targets of 10 gigatons of CO₂ stored per annum. But progress is very slow, largely because there are no strong commercial incentives, such as an effective carbon tax. We are currently relying mainly on altruism or on sites where injecting the CO₂ can enhance the production of more oil and gas to offset the CCS costs.”

Some companies – and indeed nations – already recognise the need for a long-term change in attitudes and actions. The Qatar Carbonates and Carbon Storage Research Centre established in 2008 at Imperial is unusual: the $70m programme has a ten-year time horizon. This has allowed Maitland and his team to undertake their ground-breaking research, measuring the effectiveness of carbon capture and storage methods in depleted oil and gas reservoirs and the salt-water saturated layers of permeable rock found deep underwater that are known as saline aquifers.

"4,000 million tonnes the amount of CO2 that needs to be captured and stored per annum by 2040 under the IEA's 2oC scenaria (2DS) (its currently at 70 million tonnes)"

They are the first to apply to CCS the measuring methodology known as ‘pendant drop’ to accumulate data on how the captured gases behave under the kind of high temperatures (around 250°C) and pressures (more than one kilobar) found in locations suitable for carbon storage. As Maitland points out, developing a carbon storage facility in a saline aquifer is no easy exercise, as the aquifers are usually to be found between one and two kilometres below ground. The trick is to recreate these extreme conditions above ground.

The pendant drop methodology enables measurement of the interfacial tensions between the CO₂ and the fluids it encounters in the reservoir. It is all about contact angles that allow the team to characterise the ‘wettability’ of the rock to CO₂ – the aim is not to wet the rock. The results are crucial both for predicting the capacity of the storage facility and for ensuring that the injection of the noxious gases takes place at pressures which avoid fracturing the rock and that they remain permanently trapped.

Maitland works alongside Martin Trusler, Professor of Thermophysics, who designs the bespoke equipment needed to conduct the experiments under the very high pressures and temperatures required. The team’s work supplies data to identify suitable reservoirs and to optimise the design for CCS facilities to ensure maximum efficiency and lowest risk, both commercial and environmental. “The benefit,” says Maitland, “is that if you know in advance just how much CO₂ can be effectively captured and stored in differing locations, expensive, long-term commercial decisions are more likely be taken.

“We know how to capture and store CO₂, but inevitably it comes at a cost. At the moment, it is probably more expensive than using some renewable energies such as wind. But as we are going to continue to use fossil fuels, at least in the short-to-medium term, we have to do something – by industry and academia bringing costs down and governments introducing realistic carbon charges.” The complex equations which lie behind his team’s usage of the pendant drop methodology provide at least some of the answers.