Blast injuries can devastate lives. But a unique centre at Imperial is providing hope for the future. 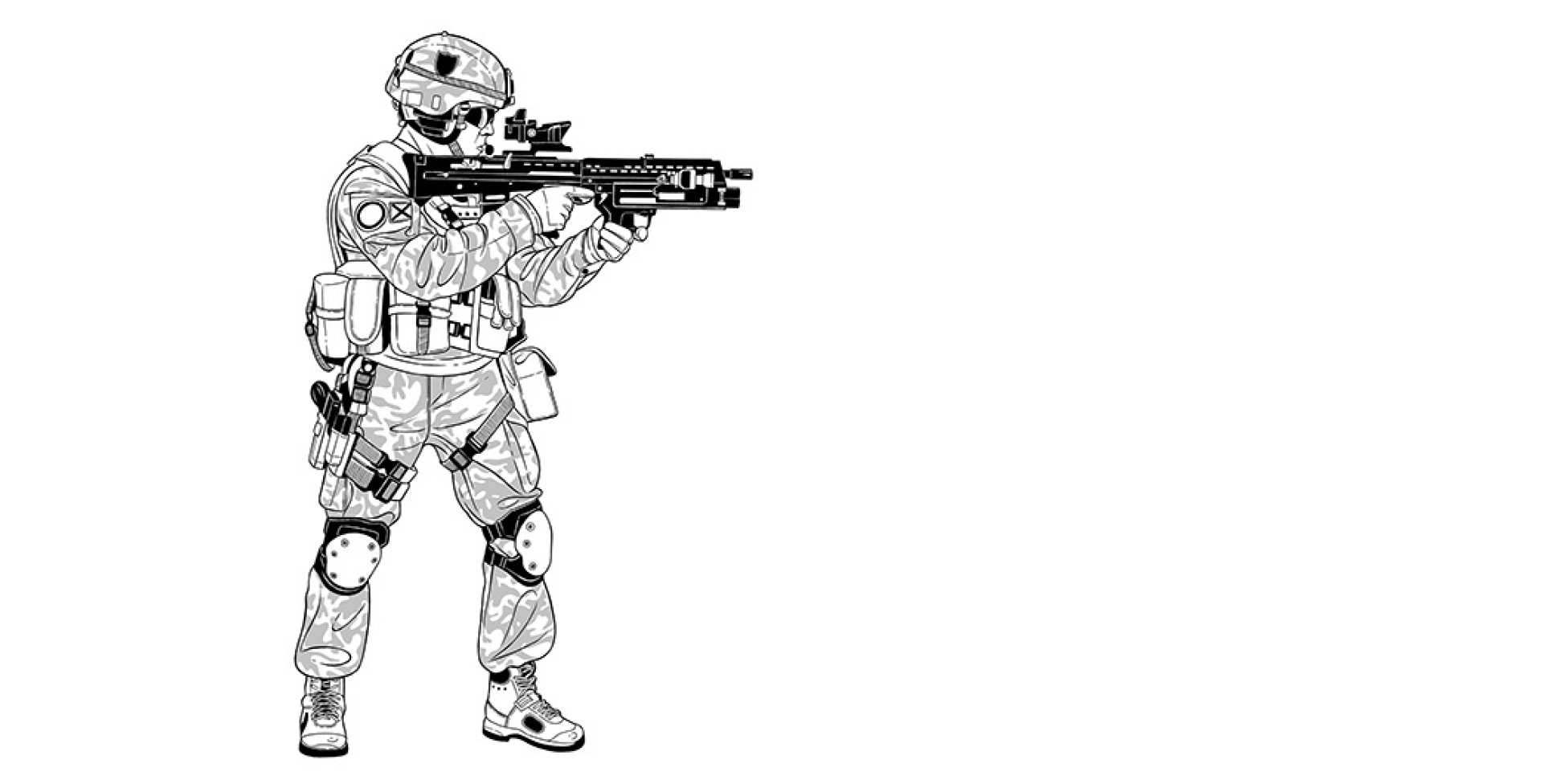 Blast injuries have been called the ‘invisible killer’, as prevalent in modern warfare as when they caused so much devastation in the First World War more than a century ago. Indeed, in the recent conflict in Afghanistan, roadside bombs or improvised explosive devices (IEDs) were the leading cause of death and injury for UK forces personnel. Of the individuals who survived the initial blast, 291 required the amputation of one or more limbs.

“Explosions generate very fast, very powerful increases in air pressure as an invisible wave outward and away from the site of the blast. The shockwave passes through the tissues, causing differences in pressure at all sites in the body where gas and liquid are contained.”

The effect is immediate and devastating, but it can also have serious implications months and years afterwards. She says: “Perhaps the most serious threat to blast injury casualties is our inability to consolidate research gains made during wartime. Medical history shows that we are always efficient at treating the immediate emergencies of wounds but have not been able to sustain work to resolve the broader issues, like pain in its various forms.”

Finding out how to aid the recovery of affected individuals and improve their subsequent lives – and protect against such injuries in future operations – is the mission of the Royal British Legion Centre for Blast Injury Studies (CBIS) at Imperial. It’s the only centre of its kind in the UK and was founded in 2011 with the financial backing of the Royal British Legion and support from the Ministry of Defence. It brings together military medics and civilian engineers and scientists from around the world. Professor Anthony Bull (Mechanical Engineering 1992, PhD 1995), Head of the Department of Bioengineering and Director of the Centre, says: “There were people who were good at designing vehicles and protective equipment, and there were military medics who were good at saving lives. But they were not really learning from each other about how to do a better job.

“We realised there was a lot we could achieve by putting these people together, with people in the middle to make it all work. We now have: clinicians; rehab specialists; hardcore engineers who do materials engineering; and then people like myself who look at the tissues of the body, how they respond to load and how we can reconstruct and repair them.”

The participation of the military – from both UK and allied forces – is essential in allowing CBIS to pursue its long-term goals. Its clinical lead is Professor Jonathan Clasper, a colonel in the Royal Army Medical Corps who spends one day a week at the Centre; military surgeons from both sides of the Atlantic come to Imperial on collaborative projects. “It’s important that we have access to military incident data,” says Professor Bull. “We need to know things like where every blast victim received their injury, the size of the blast, and the medical outcome.”

Mayhew was involved with CBIS while researching her book A Heavy Reckoning: War, Medicine and Survival in Afghanistan and Beyond. She says: “There is a tremendous similarity between the injuries of the First World War and 21st-century conflict. A lot of the research threads that we’ve picked up in the Centre were laid down a century ago, but the medical establishment didn’t want these new disciplines to be developed. They were worried that if you had this whole new section of orthopaedic surgeons and specialists, then general surgeons and general practitioners would lose fees; so they shut them down. All the ability and knowledge learned in the early 20th century was lost.

“However, we know about these soldiers’ needs because some of them didn’t die until the 1970s, and we have their complete medical records. Unfortunately, many of them lived lives of misery and pain.”

Large-scale cohort studies track the progress of today’s veterans. CBIS has been collaborating with King’s College London and the Defence Medical Rehabilitation Centre at Headley Court on a 20-year follow-up of 600 soldiers with very severe injuries. Bull says: “Every three to five years, we’ll physically measure various indicators of musculoskeletal and cardiovascular health, comparing them with a control group who were exposed to the battlefield but not injured.”

Musculoskeletal damage may be the most visible consequence, but blast can affect every system of the body. Dr Mazdak Ghajari (PhD Mechanical Engineering 2010), a Lecturer at the Dyson School of Design Engineering, specialises in the biomechanics of traumatic brain injury. Outside CBIS, his research has been concerned with single-impact events such as those found in road-traffic accidents, but blast injuries are both more complex and less clearly understood. Sometimes there is little outward sign of damage, and symptoms such as amnesia, confusion and personality change can take weeks or months to show themselves.

He says: “We have a combination of different forces. Initial blast is a pressure front travelling at supersonic speed, but after this you have something called blast wind – a negative phase that’s more like a suction action. Some researchers even think this second phase causes the brain injury, though that’s controversial.”

If finding out how these forces interact with the brain to cause injury is challenging, working out how to protect against them is tougher still. In collaboration with the Division of Brain Sciences at Imperial, Ghajari has been working to improve the design of helmets and other impact mitigation devices.

He says: “With something like shrapnel, you just make the helmet stiffer so that it can’t be penetrated or deformed. With blast, the situation is different: you have a pressure wave that can be transmitted through the material. It’s difficult to imagine how to protect against this. It may be that it’s not even possible with one helmet, and we need a more complex protective system.”

Injury from a more specific brain condition under investigation at CBIS is auditory processing disorder (APD). “It’s a problem with the neurocircuitry that’s responsible for sound processing,” says Dr Tobias Reichenbach, the Senior Lecturer in Bioengineering who specialises in the condition. “We don’t just hear with our ears, but with our brain. People with APD typically have difficulty understanding speech in noisy situations. So, if you’re in a busy pub, you may find it difficult to focus on the particular person you want to talk to.”

The exact nature of the neuroimpairment that causes APD remains elusive, but he believes that its appearance in blast victims is a result of structural damage to the brain caused by the pressure wave. To alleviate the condition, his team at CBIS has developed technology that uses electrodes to decode brain activity and determine what the wearer is trying to listen to, with a view to using it in a mind-controlled hearing aid.

Another typical consequence of blast injury is heterotopic ossification. This is the abnormal growth of bone in the affected limb, appearing as deposits in muscle, tendons and other soft tissue. It affects around 65 per cent of British military amputees and can cause severe pain, making the use of prosthetics difficult or impossible.

“The research into it is complicated,” says Reichenbach. “We have to recreate a blast wave in an experimental model to see if we can recreate this kind of bone by shocking human cells, and we’ve been doing complex computer modelling of how bone grows. This helps us work out how to change early treatment to slow down the rate of bone formation or change its shape so that it can bear load, rather than appear as a nasty spider’s web in the limb.”

Perhaps the most intractable problem for the Centre’s researchers is chronic pain among amputees. In A Heavy Reckoning, Mayhew contends that the past century has seen very little headway in alleviating it. “You’ll have pain at the amputation site, in the stump,” she says. “But then you have this extraordinary thing called phantom limb pain. That’s where you feel pain in the limb that has gone, and there’s still very little we can do for this. We know that the rate of it is very similar to 100 years ago.”

Despite being established only seven years ago, CBIS is already having a significant impact both in academic research and its practical application. Professor Bull says: “We don’t treat our funding as a grant to allow us to retreat into an ivory tower and do our thing. We’re very milestone driven, and it takes a certain type of academic to want to engage with that – not everyone does.

“As for specific goals, I’d like us to come up with an effective therapy for auditory processing disorder, and I’d like us to discover a treatment for heterotopic ossification. There are other things in the pipeline – we’ve created an orthopaedic implant for above-the-knee amputees that will change the way they can bear load. That has been tested and is now going through the approvals process, and there are patients lining up to use it.”

“We’re dealing with a real emergency,” says Mayhew. “We have to keep focused on the victims of blast injury and work out who we need to gather around them to make improvements to their lives.”

Common blast injuries and their treatments

Brain: Traumatic brain injury
This is a ‘signature injury’ of recent conflicts in Iraq and Afghanistan. Veterans may develop problems with cognition, memory and sleep, and the damage may not become apparent until long after the initial blast. Researchers at CBIS have been exploring the use of Xenon gas as a treatment.

Hearing: Auditory processing disorder (APD)
Veterans exposed to blast have a high incidence of APD, a brain disorder that affects perception of sound – particularly the ability to understand speech whenever there is background noise. The Centre for Blast Injury Studies (CBIS) is working on a mind-controlled hearing aid that can isolate and boost the voice being listened to.

Chest: Blast lung
For soldiers who survive an initial explosion, blast lung is the most common cause of death. Its symptoms include internal bruising, blood vessel damage and haemorrhage – often without obvious external signs. Effective treatment and protection is among CBIS’s clinical priorities.

Arm: Post-amputation pain
Clinicians have long known that most amputees will suffer ‘phantom pain’ that seems to originate in the missing limb, and that it can be debilitatingly severe. It remains difficult to manage, but research shows a tailored rehabilitation programme for each patient produces the best results.

Pelvis: Open blast fractures
When an explosion causes the pelvis to open up – something often encountered in open-field combat – a pelvic binder is used to strap it together. Work at the Centre shows that in blast injuries, the binder should be positioned differently than in civilian cases such as car crashes.

Lower leg: Heterotopic ossification
One of the strangest long-term effects of blast damage is the growth of abnormal bone tissue at the site of an amputation. This can affect the load-bearing ability of the stump, preventing prosthetic limbs from being used. CBIS is researching ways to slow down and reshape this bone growth