The eight weeks I was fortunate enough to spend at UBC in Vancouver were amazing, both in terms of the research carried out 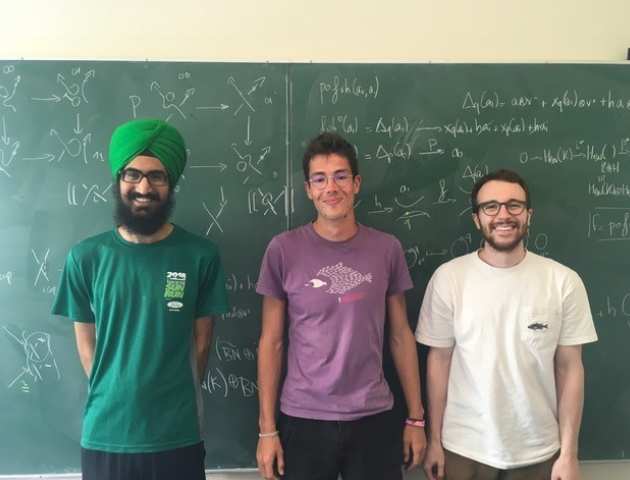 and the experiences gained. My research was on a new combinatorically defined homology theory for knots called Khovanov homology, which associates ‘simple’ objects to mathematical knots so that they can be more easily studied and compared. My relatively short time at the university meant that no new results could realistically be obtained, but I was able to get a hold on the basics of a very active field. More generally, the research introduced me to a brand-new area of maths which I’m very motivated to study further. I really wasn’t sure what to expect from the experience before going into it (indeed, one of the main reasons for me applying was to get a better understanding of what it means to do maths in a research setting) but I thoroughly enjoyed the processes of finding new papers, discussing them with leading academics and distilling the ideas of others. One slight disappointment was that my seminar group had already been together for a couple of months when I arrived, so I was immediately behind the curve, but I don’t think this particularly impeded what I got out of the whole thing.

Dual to the research were, of course, many intercultural experiences. On an academic level I was able to befriend and chat with many current UBC students and staff, and I was interested to hear about the differences between the university systems in Canada and the UK. The thing that most stood out to me was the breadth of study that’s encouraged early in their degrees, with the possibility to take as little as 20% of classes relevant to your major in the first year – it was cool to see mathematicians being knowledgeable in everything from biology to art history! Vancouver also has a massive and vibrant Asian community, and it was really interesting to see how the city functions as a melting pot of very different cultures. In this vein I was also able to learn about the local First Nation, the Musqueam, on whose territory UBC stands – the great museum of anthropology on campus acted as an interpretive centre between the cultures, and entry was free! It was particularly interesting to hear the stories by current young members of the Nation, many of whom are actively trying to maintain and reinvigorate their ancestral languages and traditions in response to years of state oppression. Being close to nature was also a major part of the experience. Vancouver’s proximity to the beautiful Garibaldi Park allowed myself and a few friends the adventure of scaling a volcano with some of the most extraordinary views I’d ever seen, all without needing to stay a night away from home – definitely a massive highlight. The ability to simply go on stunning hikes on weekends without much planning was just great for mental clarity too, and really helped me to clear my mind ahead of this coming year.

Having completed the programme, I feel more confident both in myself and as a mathematician. The success I had in making friends in a faraway place gave me the hope that I might be able to do the same in the future for a longer period of time. I was able to forge a number of good connections in the department which may prove useful in the future, and I’m still in contact with my supervisor. As for the future, I’m grateful to the experience for not only showing me that research is a good option for me – particularly if it can be done in an area of outstanding natural beauty - but also for introducing a new area in which it could be conducted.

"Having completed the programme, I feel more confident both in myself and as a mathematician."