With market size, demographics, and necessity providing the spur, African innovators are leapfrogging the rest of the world 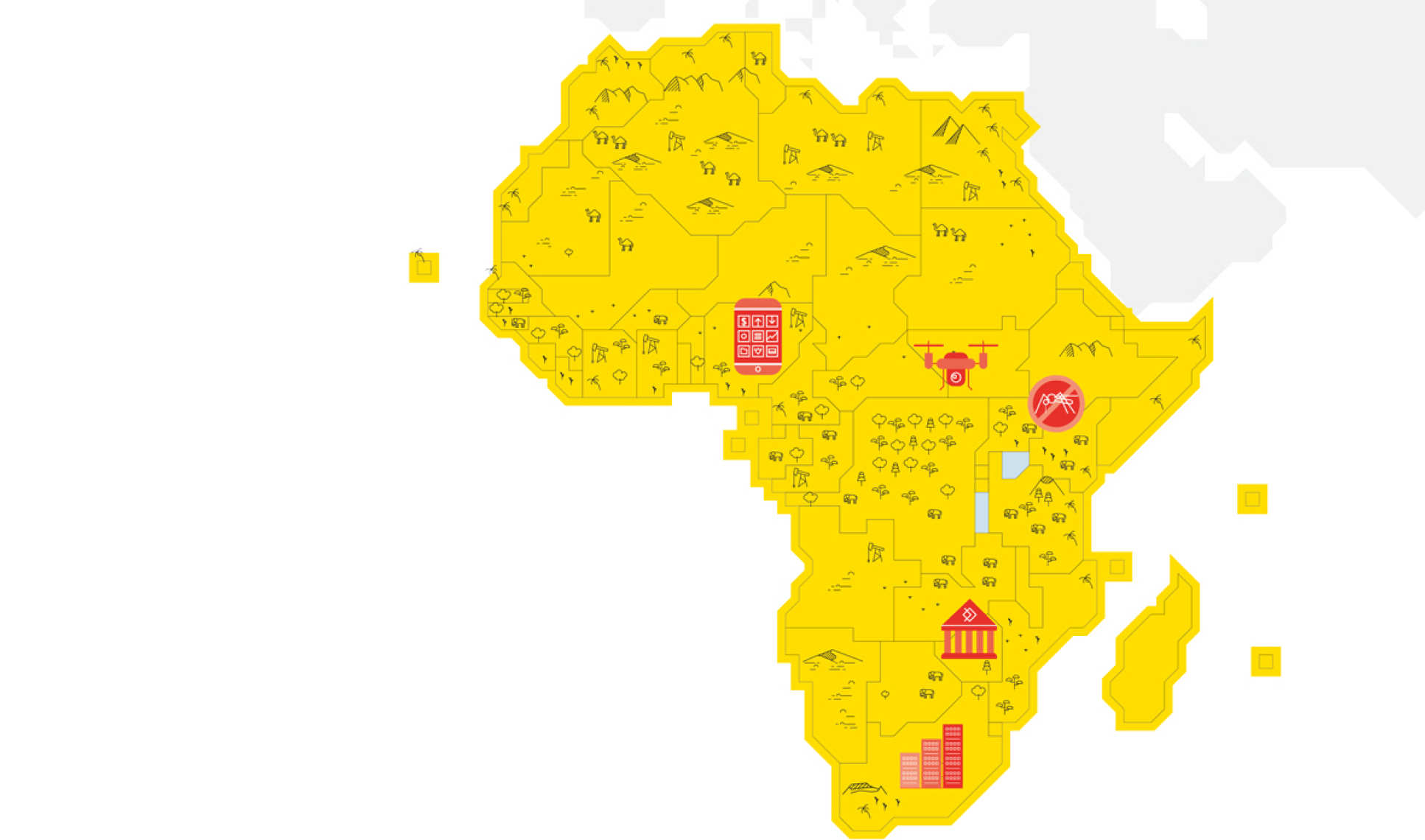 A huge – and growing demographic. The ability to harness enormous tech potential. Megacities driving a youthful and entrepreneurial outlook. And now the world’s second biggest continent could soon become one of its biggest drivers.

The so-called ‘demographic dividend’ means the continent is well placed to take advantage of the ‘fourth industrial revolution’: an era of big data and artificial intelligence. And Imperial’s alumni, research and expertise are at the heart of the knowledge explosion.

“In the past, a lot of our work with Africa was based on ‘addressing African problems’,” says Imperial’s Vice-President (International), Professor Maggie Dallman. “But now we’re developing areas of expertise and academic exchange. Bringing brilliant people here –  and sending brilliant people there.”

One person who understands that exchange better than most is Imperial alumna Natalie Jabangwe (MBA 2012), CEO of Africa’s largest mobile-phone-based financial services company, EcoCash. “More Africans own a mobile phone than own a toothbrush,” says Jabangwe. “Necessity is the mother of invention, and in mobile financial services and technology, Africa is leapfrogging the rest of the world.”

“The continued growth of the African economy will depend on SMEs’ access to credit,” says Jabangwe. “This is where the biggest growth will come from. Sixty per cent of the world’s 200 billion SMEs are in Africa, yet 75 per cent of African SMEs don’t have that access.”

Knowing how much money you have, and being able to control it, means you can save for your child’s education and grow your business"

Which is why EcoCash, alongside other mobile money services companies such as M-Pesa in Kenya, has developed a solution. “In the absence of collateral,” explains Jabangwe, “we can use data – your income and expenditure, how often you top up your phone,  who you communicate with, how often you move around – to get a picture of your financial circumstances and cut through traditional financial eligibility.”

“I’ve lived in many different places,” says South African Benji Meltzer (MSc Bioengineering 2014), “and the opportunity in Africa is huge. The tech talent is very strong and people are embracing technology, because they have to. Governments and the climate have done them no favours.”

Uzoma Dozie (MBA 1998), who as CEO of Nigeria’s Diamond Bank oversaw its recent merger with Access Bank, agrees. “The UK, for example, has been very slow to take up mobile banking solutions,” he says, “and that’s because people had other banking options.

Getting people to change their behaviour – towards digital adoption, for example – is harder when they already have options.” He points out that there are 17 million SMEs in Nigeria that are still ‘unbanked’ – they don’t have a bank account.

“That is a huge customer base that is financially excluded because banks are not compatible with their lifestyle; they can’t physically get to one, they don’t have utility bills to open an account.”

Diamond Bank’s response has been to team up with mobile telecoms company MTN to offer a current account in response to a text. “We opened ten million bank accounts in two years,” says Dozie. Customers begin by being able to send and receive small amounts of money and can access more services as their financial stability, and access to documentation, grows.

The bank also collaborated with Nigerian fintech companies to develop a banking app and then take it to market – literally. “In markets all over the country, people, particularly women, were buying and selling goods via lots of small cash transactions. A ‘money man’, basically an extortionist, would hold the cash for them and take a cut.

They never really knew how much they had. We trained agents to go in and open bank accounts for them on their smartphones. This is something we take for granted, but which proved to be transformative. Knowing how much money they had, and being able to control it, meant people could save for their children’s education or to move to a better place, or grow their business.”

Of course, economies can’t grow when the population doesn’t have access to healthcare. “Ill-health has a micro impact on household income, the success of small businesses – productivity in general,” says Dr Jalal-Eddeen Saleh (Medicine 2004), National Professional Officer with the World Health Organization in Nigeria.

“We eradicated smallpox, and we’re nearly there with Guinea worm and polio. Eradication is the endgame and, on the way, there is disease control and elimination.” Saleh’s particular area of expertise, malaria, is a massive challenge.

Estimates suggest the disease retards Nigeria’s GDP alone by at least 40 per cent annually, costing nearly 480 billion naira (approximately £1 billion) in out-of-pocket treatments. But global efforts such as Imperial’s own research and the Roll Back Malaria campaign (which includes providing treated malaria nets to the population) have resulted in a reduction in prevalence of the disease in Nigeria from 42 per cent to 27 per cent (according to latest figures available). This has a direct impact on economic growth.

Back in South Africa, Benji Meltzer and his company Aerobotics are using big data and machine learning to develop software for drones, which has the potential to boost food security. Agriculture remains the continent’s largest industry, employing 53 per cent of Africans.

“Drones can survey a huge area of land, making it possible for large-scale farmers to spot problems early, like identifying pests,” explains Meltzer. “They can then target their interventions, which is more efficient than blanket-spraying a pesticide.”

Meltzer is currently working with large-scale farms, but once the technology is developed and adopted by more customers, the cost should come down, making it more accessible for smaller farmers. “Farmers with smartphones already have access to knowledge such as weather forecasts and pest control that they didn’t before,” he adds.

But, of course, data connectivity doesn’t just miraculously occur, and making it happen throws up various challenges for Africa. “Data connectivity is going to be key in driving Africa’s participation in the global economy,” says Jeff Molobela (Metallurgy and Materials Science 1982, MBA 1993), a businessman and expert on South African telecoms and infrastructure.

“Young people demand access to instant communication and information. But African telecoms companies need to pay attention to the challenges – they need to facilitate innovation at lower costs to the end user and promote inclusivity. I am involved in bringing new fibre cables into eastern and southern Africa, and I can say that connectivity needs a cross-African focus, for continued innovation.”

Data and technology means the democratisation of knowledge, says Jabangwe. “People can now do Imperial MBAs online, for example,” she says. “They have access to top-class institutions at a third of the cost, and access to digital learning platforms in different areas.”

Finding solutions to the hardest global challenges – from health and infrastructure to nutrition and mass communications – takes inspiration, determination and partnership. But the unique environment that Imperial creates, along with the ability to  harness new and emerging technology, is truly transformational.