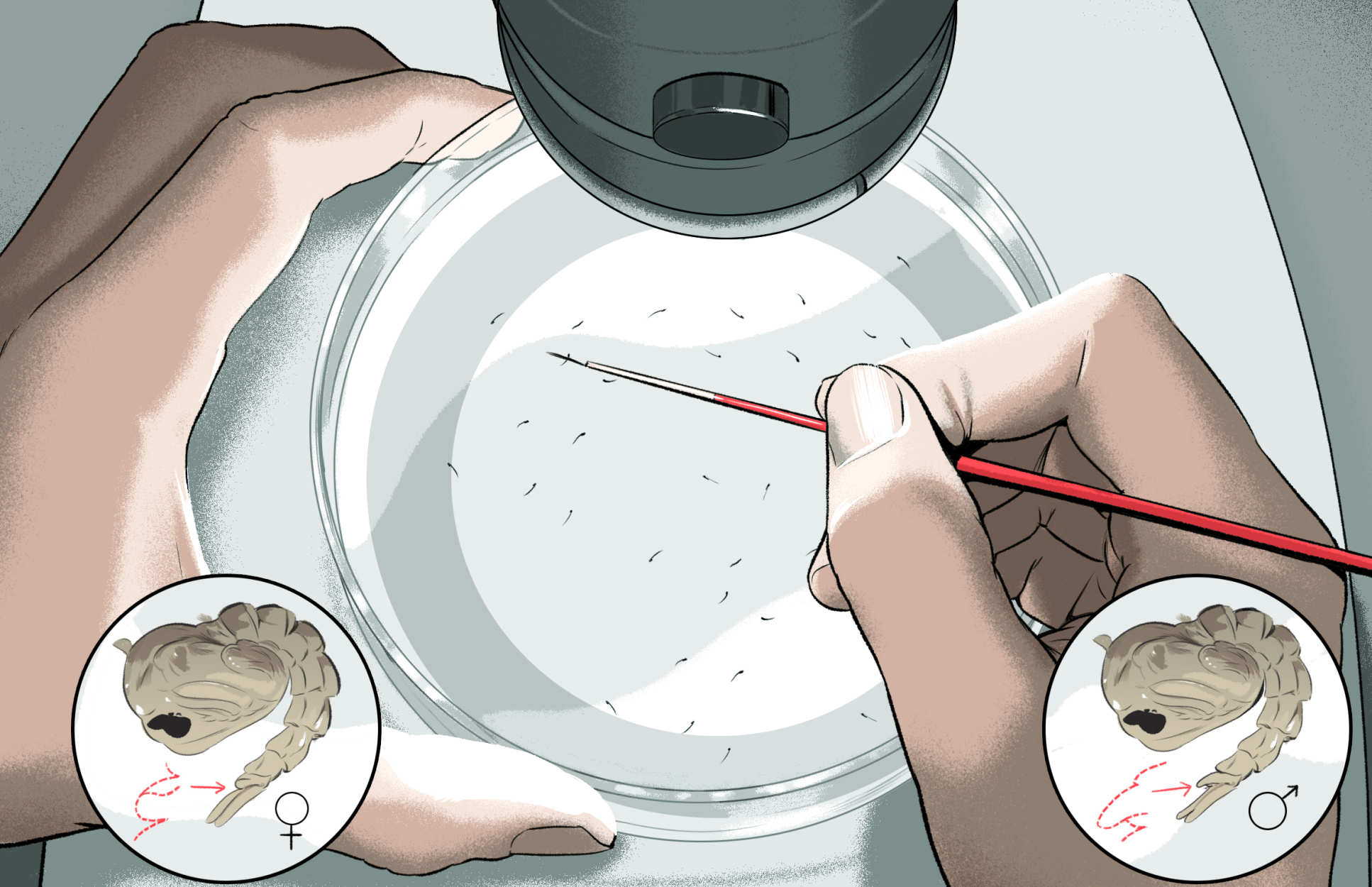 A single mosquito strike is all it takes to become infected with malaria, a disease that kills 800,000 people every year. At Imperial's mosquito labs, researchers are using gene-drive techniques to stop infection in its tracks.

Down a violet-painted corridor and through a hefty pair of doors, the bloodsuckers are hungry. As research associate Dr Roya Haghighat-Khah splays out her hand just above a white-mesh box containing about 50 female mosquitoes, they fly up to the top and desperately hang on. It’s only the females that bite humans, she points out cheerfully. “You can see their proboscis pierce the mesh.”

Here, deep in South Kensington’s Sir Alexander Fleming Building, stainless-steel shelves hold yet more white-mesh boxes, all full of mosquitoes, while larvae and pupae wriggle away in dishes, waiting to be fed fish food pellets. In the fridge sit tasty bottles of blood meal, made from cow’s blood. And on a table lies ‘The Executioner’, a tennis-racket-shaped electronic mosquito zapper designed to make short work of any escapees.

This lab is the site of potential game-changing discoveries in the age-old battle against one of the planet’s oldest and  deadliest threats – malaria. Despite antimalarials, insecticides, protective nets and a rudimentary but, as yet, unlicensed vaccine, malaria still kills 800,000 people a year, with around half a million less lethal cases annually. UNICEF estimates that a  child dies from the disease every 30 seconds.

But the mosquitoes bred in the several Imperial insectaries are special – though some may also be unwittingly threatening their own species' wellbeing. Last year, Professor Andrea Crisanti and colleagues in the Department of Life Sciences became the  first to successfully ‘crash’ a mosquito population of Anopheles gambiae (the main carrier: not all mosquitoes spread malaria) in a lab, using genetically modified mosquitoes.

They harnessed the gene-editing molecule Crispr to develop a novel genetic tool known as a ‘gene drive’. It progressively spread a genetic modification into the mosquito population designed to destroy a crucial gene called doublesex, which enables females to develop.

This is a significant discovery for those places where malaria thrives alongside war, famine and poverty, says Crisanti, Professor of Molecular Parasitology. In principle, his genetic technology doesn’t need any human intervention – it spreads by itself. Now, a new challenge awaits: convince the world.

"An entire field of social science has opened up to convince people that the technology is safe and can be utilised for the purpose for which it has been developed,” says Crisanti. “The concern around destruction of a species is a consequence of our short-term perspective on nature, due to our short lifespan. Species appear and are destroyed continuously.

Another possibility, of course, is to find drugs that will stop transmission of the parasite. But this is a particularly fiendish problem, points out Jake Baum, Professor of Cell Biology and Infectious Diseases, because malaria is not a bacteria or a virus, whose ability to avoid the immune system or evolve drug resistance is limited by the small amounts of information they can access. 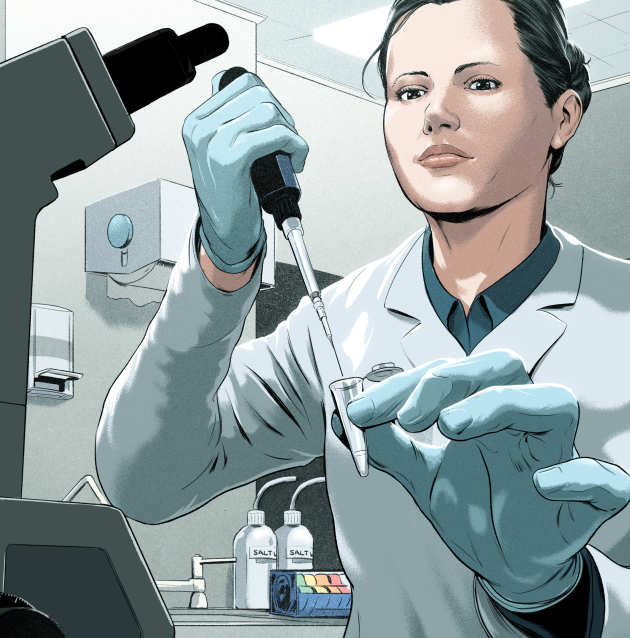 Baum’s lab is working on some of the most fundamental questions surrounding the malaria parasite: how does it actually cause infection and how might understanding this process better lead to a vaccine? In his insectary, they breed a South Central Asian mosquito called Anopheles stephensi, and maintain parasite strains that have been collected over decades. He’s a fan of basic fundamental science, as well the ‘art of looking’.

My mother was an abstract painter, so I was always taught to look,” he says. “For example, when the parasite is taken up by the mosquito into its stomach, it becomes activated by the drop in temperature and increase in pH level. If you drop the temperature and fool the parasite into thinking it’s in the mosquito, you can watch the transformation happen. And then you can train a microscope to watch it happening on a massive scale, and use this to screen for drugs that stop the activation process.”

His lab has recently used this technique during a project funded by the Bill and Melinda Gates Foundation to screen 70,000 drug compounds, collected by the University of Dundee, which might stop humans from transmitting malaria to mosquitoes.

Vaccines are, of course, a crucial potential weapon. But they have proved hugely difficult to find, again due to the complex nature of the parasite. One vaccine, RTS,S, has been trialled in children, but shows around only 30 per cent efficacy. “And there is nothing else as advanced as that, which leaves us really vulnerable,”  says research associate Dr Fiona Angrisano.

Instead, Angrisano’s current work is focused around a protein called HAP2, which can be found on the surface of the reproductive cells of male malarial parasites. When theseparasites are shot into a human by a mosquito bite, they infect first the liver, then the red blood cells.

When they are bitten by another mosquito, that mosquito picks up the parasite, after which male and female reproductive cells of the parasite combine in the stomach of the host, then grow and travel to the salivary glands of the mosquito, ready to transit the malaria-causing parasite when the mosquito next bites a human. But blocking part of HAP2 disrupts that process, meaning that the mosquito won’t transmit the parasite.

The team at Imperial demonstrated that blocking part of HAP2 disrupts fertilisation. Initially the team created an antibody that blocked fertilisation events in vitro by 89.7 per cent. To test if the same effect was observed in animals, the team then created and administered an HAP2 vaccine for mice infected with the malarial parasite and found that the experimental vaccine reduced malarial transmission by 58.9 per cent compared with non-vaccinated mice.

Imperial-bred mosquitoes, once again, have been vital to the success of this work: it means that Angrisano and her colleagues can look at how the transmission-blocking process works in real mosquitoes. By allowing mosquitoes to feed on vaccinated and non-vaccinated mice, they can dissect the mosquito midgut and count the number of successful fertilisation events present, thus determining the reduction in malarial transmission.

“We’ve shown in the lab that we can block fertilisation well, and so the aim of this research is to try to enhance the reduction in transmission we see by developing this vaccine further,” says Angrisano. “The overall aim of a transmission-blocking vaccine such as HAP2 is to treat the herd. It won’t necessarily stop disease burden or symptoms for an individual but, eventually, if everyone’s vaccinated, we may stop the spread of malaria.”

Dr Aubrey Cunnington, Clinical Senior Lecturer in the Faculty of Medicine, is coming from yet another angle: trying to understand what’s actually going on inside the human body when there’s a malaria infection. In particular: what makes malaria kill some people and not others?

Vaccines are a crucial potential weapon, but the parasite's complex nature means they are challenging to develop"

His lab is also focusing on genes, studying all the human and parasite genes expressed in an infected blood sample. They’re particularly interested in the role of genes encoding the granules inside a type of white blood cell called neutrophils. People with a high expression of these genes have been shown to be more likely to have severe malaria – but they could also be important in preventing malaria parasites getting into red blood cells, protecting against the disease.

“One of the things the neutrophils do when a bug invades your body is release these granules, which are preformed inside them,” explains Cunnington.

“It’s like throwing hand grenades. They damage the bugs but can also damage the body’s cells. They have a defence function, but if you have too much of it, it usually results in problems for your own body, too. We’ve identified that neutral granules seem to be pretty important and strongly associated with severe disease in humans.”

The next stage is to investigate further, which they’re currently doing in mouse models. Hard as it may be, malaria is a challenge we cannot ignore, says Baum – and it’s likely that there will never be one single solution. Along with Cunnington, he founded the Network of Excellence in Malaria at Imperial, bringing together more than a hundred scientists.

“Nobody owns malaria,” he points out. “I see myself as a very small part of a very large jigsaw puzzle, and you have to work with all the other pieces. We need every different aspect of understanding if we are to have a hope of finally controlling this ancient foe.”

In the insectary, the mosquitoes whine: perhaps this generation will enable the next breakthrough. For now, the malaria parasite lives on – but not, perhaps, forever.

Crashing the population, in five stages

Only female mosquitoes bite and therefore spread malaria. Imperial scientists are working to make females of the malaria-carrying Anopheles gambiae species infertile by preventing them from laying eggs. In this experiment, researchers successfully wipe out an entire mosquito population in the lab. Using a super-fine needle and a specially developed micro-injection machine, researchers inject a modified DNA gene drive into selected mosquito eggs, which impacts a crucial gene called doublesex and a fluorescent marker. The aim is to disrupt the process so that fewer females can reproduce.

Using a microscope and a precision joystick with an incredibly thin needle attached, the modified DNA is injected into the tail end  of specially prepared mosquito eggs. To keep them in an aquatic environment, the eggs are placed in a glass file next to moist blotting paper soaked with salt water.  After three to four days the eggs hatch into larvae.

The larvae are fed on fish food  pellets and, after seven days, become pupae. Under the microscope, pupae are separated into males and females and stored in separate mesh boxes. After a further two to three days, pupae develop into adults.

After 48 hours, the adults that were originally injected as eggs are crossed with ‘wild-type’ (non-genetically modified) adults of the opposite sex. A week later, mosquitoes in these boxes are fed on cow blood, which the females need for the development of their eggs. Eggs are then collected.

These harvested eggs are the offspring of the adults that were originally injected with the gene drive (and a fluorescent marker) and are grown to larvae. These larvae glow green if they have inherited the fluorescent gene that accompanies the gene drive. This confirms that the injected DNA was taken up by the mosquito DNA. These gene-drive mosquitos are then observed to see if the genetic modification has been successful.